(RNS) The wife of Saeed Abedini, the Iranian-American pastor imprisoned in Iran since September 2012, has had a difficult month.

First Naghmeh Abedini canceled all public appearances after telling supporters by email that her husband had abused her physically, emotionally and sexually. Twelve days later, she released a statement saying she regretted her previous emails. “I was under great psychological and emotional distress,” she said.

Iran sentenced Saeed Abedini, a former Muslim who converted to evangelical Christianity, to eight years in prison for his alleged involvement with Iran’s burgeoning house-church movement. In Shia-majority Iran, Sunni Muslims, Baha’is, Christians, and other minorities face harassment, arrest, and imprisonment, according to the U.S. State Department.

Since her husband’s detention in 2012, Naghmeh Abedini has been publicly advocating for his freedom, winning the support of top evangelical leaders and meeting privately with President Obama, which is why her accusations of spousal abuse came as shock. But those accusations also raise the question: Why do evangelical women wait so long before reporting abuse?

RELATED STORY: Iranian-American pastor expected back in the US today

“Many who suffer domestic abuse feel lots of shame, are blamed by others, and do not tell anyone,” said Justin Holcomb, a Florida Episcopal priest and seminary professor who co-authored with his wife Lindsey “Is It My Fault? Hope and Healing for Those Suffering Domestic Violence.”

“Christian women, in particular, stay far longer in abusive situations and in more severe abuse than their non-Christian counterparts,” he added.

So far, social media posts on Facebook, Twitter, and elsewhere show that supporters of the Abedini family were not backing away from Naghmeh after the abuse allegations became public.

“God guide and protect you and especially Saeed at this time when he will not be having visitors that he feels God in a special way during this time. May the angels protect him with a hedge of safety,” one supporter posted on Naghmeh Abedini’s Facebook page. 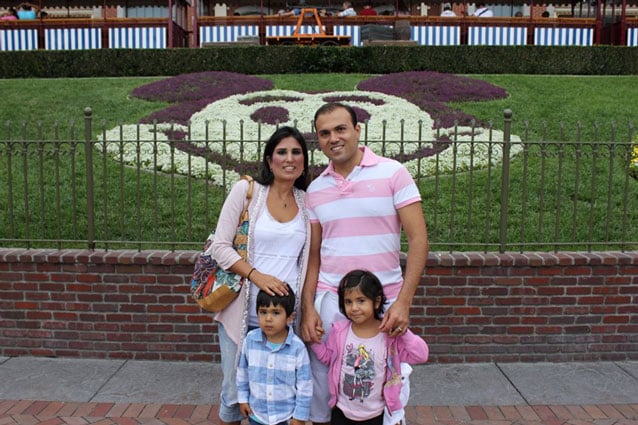 American Pastor Saeed Abedini, a Muslim convert to Christianity, faces a possible death sentence after his September 2012 arrest and subsequent indictment in Iran because of his religious beliefs. The Iranian government refuses to recognize his U.S. citizenship or make his charges public. Abedini’s U.S.-based family is being represented by the American Center for Law and Justice (ACLJ). Photo courtesy American Center for Law and Justice

An American citizen and the mother of two children, Naghmeh Abedini said the abuse began in 2002. The two were married in 2004.

RELATED STORY: On pornography, US Catholic bishops may find an unlikely ally

Research shows that domestic abuse survivors in general are less likely to receive extensive public support through their local church. According to a 2014 poll from LifeWay Research, about two-thirds of Protestant pastors address domestic abuse from the pulpit once a year or less. Additional research from LifeWay found that only 25 percent of surveyed pastors consider abuse or sexual violence an issue within their congregation.

“Many churches appropriately stress the importance of marriage and family, but some churches wrongly teach that a wife’s primary role in life is to protect their husband’s or family’s reputation,” said Holcomb, the Episcopal priest. “Because of this emphasis, those experiencing abuse in their relationship may feel ashamed because they believe they failed in their relationship,” Holcomb said.

He said domestic abuse is much more prevalent than many people realize: He cites research that indicates one in four women will experience abuse in an “intimate partner relationship.” Holcomb advises pastors to talk more openly about domestic abuse, be accessible to abuse survivors, and collaborate with social agencies and law enforcement.

Abuse is one of the most under-reported crimes, he said. “It is extremely unusual for someone to lie about these kinds of claims.”

READ: Jesus never mentioned in Psalms, but author Tim Keller sees him there

According to Lenore Walker, a professor at Nova Southeastern University and founder of the Domestic Violence Institute, “Women with strong religious backgrounds often are less likely to believe that violence against them is wrong.”

The campaign for release of Abedini continues to have a very high public profile. In January, shortly after delivering the State of the Union address, Obama met with Naghmeh and her two children briefly and pledged to make release of Saeed a top priority.

In a mid-November statement, the American Center for Law and Justice, which is representing the family, said, “What we are focused on is this: bringing home an American pastor who has been wrongly imprisoned in Iran because of his faith.”

Beginning about 15 years ago, Abedini reportedly joined local efforts to start up house churches. But about 10 years ago, Iran began an aggressive crackdown on these churches. Abedini, who moved to the U.S. with his family in 2005, shifted his attention from starting house churches to care for Iranian orphans.

In the 2014 book “Too Many To Jail,” author-researcher Mark Bradley documents the rapid growth of house church Christians from 1979 to the present day. He describes Iran as having “the fastest growing church in the world” and projects that there may be 1 million Christians in Iran by 2020.