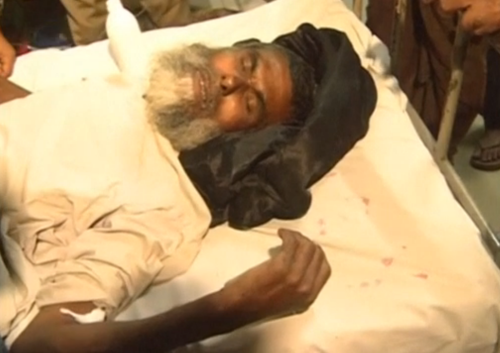 DHAKA (Reuters) Islamic State has claimed responsibility for an attack on a Shiite Muslim mosque in Bangladesh on Thursday, killing a cleric and wounding three other people, the second attack on the country's tiny Shiite Muslim community in a month.

Witnesses said three young men stormed into the mosque in northwestern Bogra district and shot at worshippers indiscriminately during prayers.

"The attackers entered the mosque and opened fire on the devotees after locking the main gate and then fled immediately after the shooting," police official Ahsan Habib said.

Two people from two nearby villages had been picked up for questioning about the attack, another police officer Arifur Rahman said.

READ: The ‘Splainer: What does the apocalyptic jihad of ISIS mean for the rest of us?

SITE monitoring service said that Islamic State had claimed responsibility for the attack, just as it did for the previous bombing on the biggest Shi'ite shrine in the country.

Muslim-majority Bangladesh has seen a rise in Islamist violence in recent months, with two foreigners, four secular writers and a publisher killed this year.

Australia said on Friday that it had given permission to families of government staff posted in Bangladesh to return home, saying there was a threat to Australian and Western interests in the country.

It also said in a travel advice posted on the foreign ministry's website that it planned to withdraw all Australian government-funded volunteers in Bangladesh by Dec. 31.

"There is reliable information to suggest that militants may be planning to target Australian and Western interests in Bangladesh," it said. Last month Australia cancelled a cricket tour of Bangladesh although it played a soccer qualifier game in Dhaka on Nov. 17.

Tensions have rising in Bangladesh since Prime Minister Sheikh Hasina launched a crackdown on militants, putting several leaders on trial for war crimes committed during the 1971 war of independence.

About a dozen Christian priests in the north have also received death threats, a week after an Italian doctor working as a missionary was shot and wounded, police said on Thursday. "We have already stepped up security around the churches," local police chief Abdullah Al Faruk said.

Bangladesh's government has rejected Islamic State claims of involvement in the attacks and says local militants are involved. Critics say the government is whipping up a climate of fear to go after its political rivals.

Earlier on Thursday, police said they had killed a top militant suspected to have masterminded the Oct. 24 attack on the Shi'ite shrine in Dhaka. They said he was the military chief of a banned underground militant group.

Related Posts
By Mike Ghouse
President Erdogan, preserve Hagia Sophia as a church
By Caitlin Yoshiko Kandil
'I have to find the Mecca of my heart': Muslims grieve as hajj is drastically limited
By Aysha Khan
Indianapolis Muslims call for hate crime investigation into mosque shooting on Eid
By Simran Jeet Singh
Before reopening, houses of worship should consider what their faith holds most dear
By Hind Makki
Coronavirus restrictions on mosques bring women to the fore