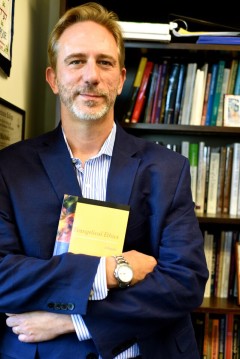 If you want to know who we should elect as president, how you should think about your friends, and what to make of yourself as the year draws to a close, read on.

A few years ago I read a quite compelling book by Matthew Kelly called Rediscover Catholicism. Among the many interesting features of this book is the author’s continual invocation of the phrase “becoming the best version of yourself.” He suggests that one way to understand the spiritual life is as a process of becoming the best version of ourselves through Catholic spiritual disciplines designed to accomplish precisely that.

The phrase has stuck with me, and in the quiet moments of Thanksgiving Week it surprised me by resurfacing in powerful ways. As I thought about where (and who) I am at this moment, and considered some key people in my life, and read about the state of our country right now, I kept pondering what it mean for me, them, and us to become the best version of ourselves. With appreciation to Matthew Kelly, but no responsibility on his part for what I am doing with his concept, I offer a few thoughts.

One immediate value of the concept at a personal level is that it calls me to be the best version of myself, not someone else. Many of us are tempted to compare ourselves with other people. Sometimes we look at others in order to compare ourselves favorably — at least I am doing better than that person is! Other times we look at others in order to reproach ourselves — why can’t I be as holy/effective/successful as they are? We are constantly looking around at others as some kind of measuring stick for our own lives. But it is a truism that is nonetheless true that each person is unique. My goal must not be to become a knockoff version of someone else but instead the best possible version of myself.

When thinking about other people, their successes and their struggles, the concept is also helpful. All people have their own individual journeys in life. Each has particular advantages or disadvantages of background, temperament, resources, relationships, and life experiences. Most people in their own way are undertaking some kind of quest to become the best version of themselves, given all relevant factors that affect their ability to do so. Some people are so deeply disadvantaged that what for them is the best version of themselves would look very modest compared to the achievements of others whose lot in life has been much more favorable. As Jesus said (Matthew 7), “Judge not lest you be judged.”

We can look around at the passing parade of daily news with the same concept in mind. What might it mean for our nation or any nation to become the best version of itself? More and more I think that this question of national character is far more important than any particular moral or policy issue. One can ask, for example, of presidential candidates: would this person in the White House embody and advance the best possible version of ourselves as a nation? Given everything — demeanor, temperament, language, policies — is this or that candidate most likely to advance the best version of who we are as a people? It is a stern test and, I think, a very illuminating one.

Many forces conspire to distract me, you, and all of us from even attempting to become the best possible version of ourselves. I think Matthew Kelly and other spiritual writers are correct in reminding us that pursuing such a goal and making any progress at it requires spiritual and moral practices that feed our best selves and starve our worst.

So, at Advent 2015 — how am I doing at becoming the best version of myself? And you? And our country?