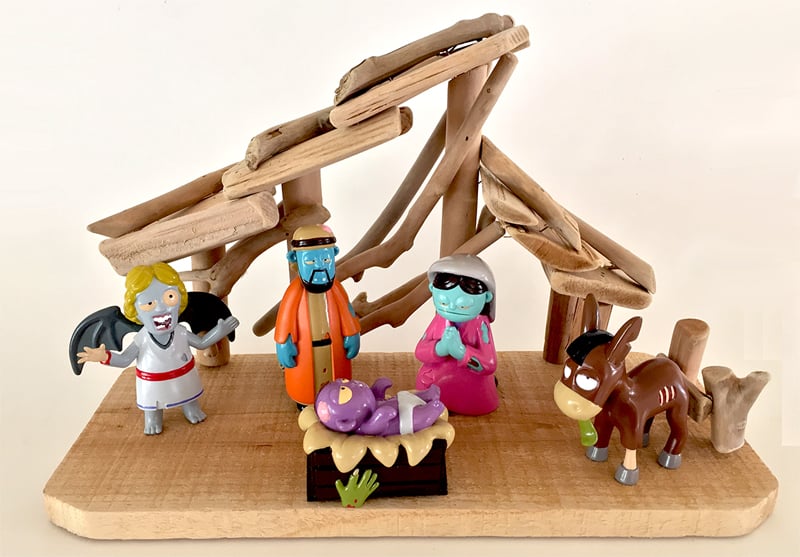 Welcome to “Zombie Nativity,” a new Christmas decoration/collectible/toy featuring a holy family, an angel and a donkey who are undead, partially decomposing and looking for their favorite meal — the gray matter inside your head. Photo courtesy of NerdTalk Toys

(RNS) The wise men who show up at this manger can ditch the gold, frankincense and myrrh for some brains.

Welcome to “Zombie Nativity,” a new Christmas decoration/collectible/toy featuring a holy family, an angel and a donkey who are undead, partially decomposing and looking for their favorite meal — the gray matter inside your head.

Put it up at Halloween and leave it there through Christmas, its promotional material says.

And while Zombie Nativity is sure to offend many, it is tapping into an ongoing fascination with the undead marked by movies, television shows and books, including “The Walking Dead,” “Game of Thrones” and “Pride and Prejudice and Zombies.”

READ: ‘Christmas is all about Jesus’ signs pushed by pastors

Zombie Nativity, targeted to be available for Christmas 2016, is the first product developed by NerdTalk Toys, a startup company that consists of two friends and workmates, Ashley Gojic and Justin Contre. She’s an atheist and he is a Catholic, but they both agree that Christmas is a time to have some fun with long-running traditions, like the creche.

“I think it is funny to take something that is so innocent or sacred or protected and throw it on its head by making them zombies or something else they shouldn’t be,” Gojic said. “It’s like making a pink Darth Vader and calling him Darth Gayder. It’s just ridiculous.”

Gojic, who is 26, came up with the idea a year or more ago, inspired by the book “World War Z” and the television series “The Walking Dead.” She shared her idea with Contre the next day at their jobs, as marketing professionals for a Phoenix health care company. He loved it immediately, and they founded the company.

They found a toy designer to do some sketches and create a manufacturing file needed to create plastic molds, and then located an overseas factory to do the work. In October, they launched a $45,000 Kickstarter campaign — complete with an irreverent, spoofy movie — and Zombie Nativity was on its way. Backers of the project will get the first sets that are produced. 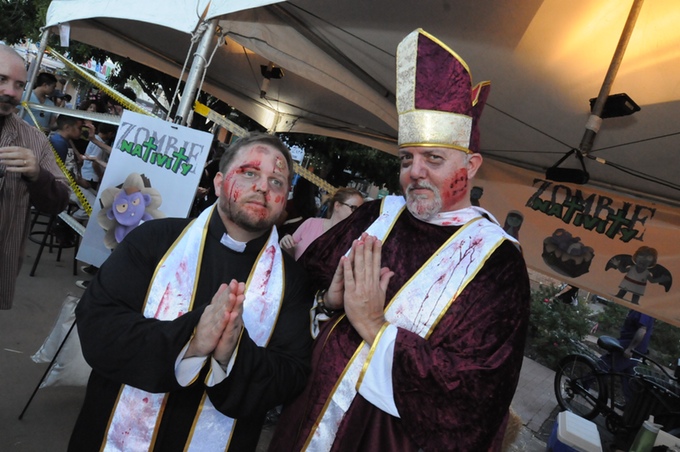 Before declaring this another salvo in the “war” on Christmas, consider this: Contre, who has drifted away from church if not from identifying as a Catholic, said Zombie Nativity has brought him closer both to his childhood faith and his devout parents. For the first time, he said, they had a conversation about the meaning of the Nativity displayed in their home at Christmas.

“We talked about what they believe, what I believe and how we think Jesus should be represented,” he said. “They are happy I have a Nativity in my house now, even though it is zombies.”

Even his father, whom Contre described as once being “one vow away from becoming a priest,” likes the Nativity, though he doesn’t want one for himself. And it’s a hit with Contre’s mother-in-law, he said. Visiting from Alaska, she saw the Zombie Nativity he displays in his house and declared, “It’s cute.”

Kelly Baker, author of “The Zombies Are Coming! The Realities of the Zombie Apocalypse in American Culture,” says it isn’t a stretch to link religion and zombies — and our fascination with them may be a reflection of the pessimism of our current culture.

“Media about zombies are apocalypse tales,” she said in an email. “Yet, zombies also suggest that the afterlife is not what most Christians imagine it to be. They resurrect, but only bodies remain, not souls. If the resurrection of Jesus is about hope and the promise of eternal life, zombies are an inversion. Hope is gone, and eternal life is life as a ravenous corpse.”

Baker even links the current fad for zombies to the rise of the “nones” — people who, like Gojic, have no religious affiliation — because it speaks of a disenchantment with all things institutional, including religion.

Contre, too, sees the link. “We are not the first people to correlate religion and zombies, but I think my generation is more willing to critique institutionalized religion using a common theme like zombies,” he said. “We are more likely to be noninstitutionalized.”

READ: Holiday 2015: A guide to gifts for everyone on your list, religious or not

Contre and Gojic are hoping their Nativity will get a warmer reception than one displayed by an Ohio man last year on his lawn. Neighbors objected to zombie baby Jesus’ glowing eyes and town officials asked him to take it down, citing the zombie-filled manger as an illegal structure.

The figurines in Zombie Nativity look less like ravenous, dead killing machines and more like the South Park kids. But they won’t come looking for your brain this Christmas — the Kickstarter campaign funds will largely go to having them cast in China and shipped to the U.S. A minimum order of 2,000 is in the works.

“The plan is to have them in hand by Easter — or what we call ‘Zombie Jesus Day,'” Gojic said. “Then you can put them out for that.”

(Kimberly Winston is a national correspondent for RNS covering atheism, humanism and other forms of freethought.)