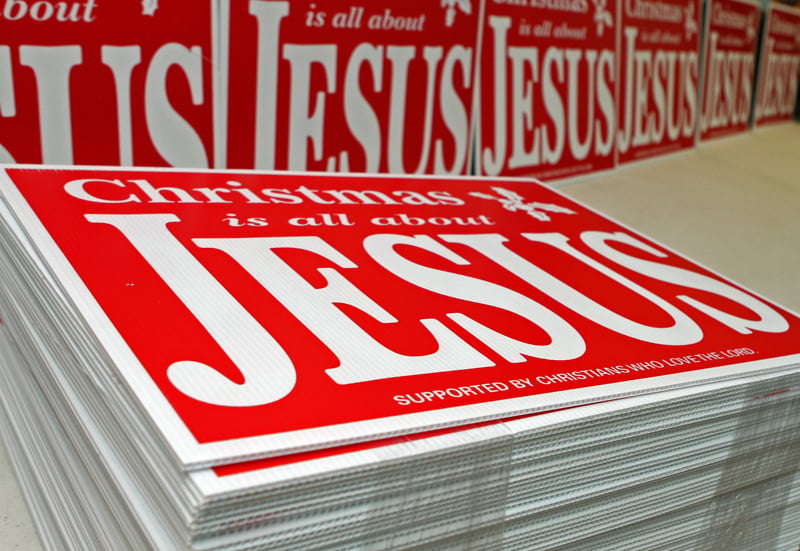 The Rev. Jimmy Terry has printed thousands more yard signs that read “Christmas is all about Jesus,” and he plans to distribute them across all of Tennessee’s 95 counties. Photo by Tony Centonze, for the Leaf-Chronicle, courtesy of USA Today

CLARKSVILLE, Tenn. — Pastor Jimmy Terry of Tabernacle Baptist Church continues his mission to make the entire month of December a celebration of Jesus. He has printed thousands more yard signs that read “Christmas is all about Jesus,” and he plans to distribute them across all of Tennessee’s 95 counties.

“This year we are asking Christians throughout the state of Tennessee to help us spread our message across the state,” Terry said. “Next year, we’re hoping that this movement in Tennessee can influence the rest of the nation. We are praying for such an impact this year that we can start to influence others around the country.”

Terry believes that the way the broader culture celebrates Christmas and Easter is inappropriate.

“The two holiest days in human history have been desecrated. At Christmas, we have given our children a man in a red suit, and at Easter, a bunny and some eggs.”

He also wonders why so many issues have an entire month devoted to their cause, but the birth and resurrection of Jesus get only one day each.

“I just drove by the Christmas light display along Riverside Drive,” he said. “They have all these trees lit up and a beautiful outline of a riverboat, but not one manger scene. We have let Satan dethrone Jesus Christ. There has already been a great response to these signs, but it hasn’t been a flood. Our goal is for every home to have one.”

READ: After uproar, German town warms to refugees who took over church

Dickson said Christmas has become more about shopping than celebrating the birth of Christ.

“We have let these holy days become commercial holidays,” he said. “It has just turned into a way for merchants to make money, we have lost the meaning of Christmas.”

“When then-Senator Obama was asked if the United States is a Christian nation, his answer was ‘No, it’s a nation of many religions.’ That didn’t sit well with me. But, after some thought I realized, that is the answer that the Christians in America have given him.

“If you were in Afghanistan, it would be ignorant to ask someone, is this a Muslim country. Everywhere you look you will see signs of their religion, and who they worship. But, how far do you have to go from your house every day before you see the name of Jesus? It’s our fault. The Bible says ‘Awake thou that sleepest.’ That is what we are here to do.”

Terry’s goal is to put 100 signs in each of Tennessee’s 95 counties. The signs are free, but donations are welcome. He has help in about 20 counties so far, and he urges his supporters to help him make this program known to their Christian friends across the state.

Church attendance is down across the nation, Dickson said, and people aren’t making church a priority in their lives.

“I attribute the decline to our church leaders, and I am one of them,” Terry said. “As Christians, we must lift up the name of Jesus, We cannot be timid. We can’t be bothered with political correctness. We can’t be afraid. We must be bold when we talk about Jesus.”

“Christians in America, we send our children to secular schools to be indoctrinated,” Terry said. ”Christians should be building Christian schools. Public schools say, ‘We don’t want God in here, we don’t want the Bible in here.’ That has become our job.”

To do that job, Terry said Christians should recite the Christmas story in as many ways and as many times as they can during December.

“We must share this story,” Terry said. “We need pastors, deacons and Sunday school teachers to help us carry this message across the state. This is Jesus’ birthday we’re celebrating. On Dec. 25 we should have fireworks going off across this entire nation.”

(This story first appeared in the Leaf-Chronicle, Clarksville, Tenn.)