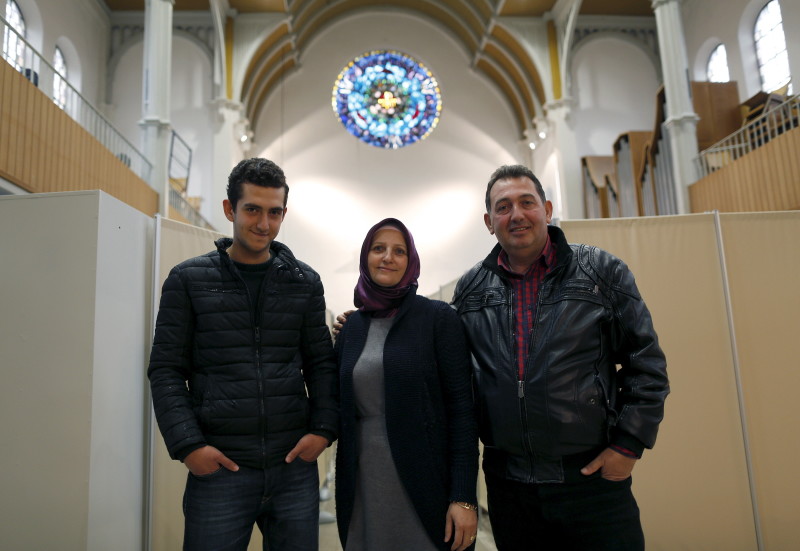 Members of a migrant Syrian family, Zabyl Olabi (C), her husband Mahmod and their 18-year-old son Humam (L), who came from Haleb near Aleppo, pose inside a Protestant church in Oberhausen, Germany November 19, 2015. Up to 140 refugees are landing in Oberhausen every week, forcing authorities to come up with new locations to house them. City officials say they had little choice but to use the church. In early November, workers removed the altar and dozens of chairs, replacing them with metal beds, which are separated by makeshift partitions to give the church’s new residents a semblance of privacy. Picture taken November 19, 2015. To match story EUROPE-MIGRANTS/GERMANY-CHURCH REUTERS/Ina Fassbender – RTX1VX13

OBERHAUSEN, Germany (Reuters) – When Daniela Handwerk looked out of her window earlier this month and saw the church across the street being emptied out and turned into a refugee shelter, she panicked – and she was not alone.

As news of the plan to house 50 refugees in the church and suspend Sunday services spread through this community on the outskirts of Oberhausen, in the Ruhr valley, angry residents pressed church and city officials to reconsider.

Some worried about safety, others about real estate values and, at a raucous meeting of locals held in the church shortly before the refugees arrived, one man complained that his new Mercedes might get scratched.

But nearly a month on, the uproar, played up at the start in the German media, has died down and residents are beginning to warm to the refugees, including 20 children, who are camped out in the ocher-colored brick church built in the early 20th century.

“Initially, there was fear among the neighbors and I don’t exclude myself,” said Handwerk. “I have two small children and of course I was worried about what was going to happen here.”

Now she is part of a local support group that counts roughly 100 volunteers. They teach German, assist with bureaucratic hurdles and play with the refugee children.

The Protestant church, surrounded by pointy-roofed stone buildings that were built to house miners, is the first in Germany to have been set aside for refugees since they began streaming into the country by the thousands in late summer.

Germany expects about 1 million migrants to arrive this year, far more than any other European country. German politicians are under intense pressure to stem the flow as local communities complain that they are being overwhelmed.

But the story of the church in Oberhausen suggests that Germany’s “Willkommenskultur,” or welcome culture, remains alive and well in some pockets of the country.

READ: The ‘Splainer: Why should we give thanks?

Local resident Sebastian Possner launched a neighborhood initiative nearly a month ago to protest against the conversion of the church. Now he says his kids are playing with the refugee children and that he’s donated bicycles and toys.

“Some of them even manage to greet us in German now,” Possner said.

Up to 140 refugees are landing in Oberhausen every week, forcing authorities to come up with new locations to house them. City officials say they had little choice but to use the church.

In early November, workers removed the altar and dozens of chairs, replacing them with metal beds, which are separated by makeshift partitions to give the church’s new residents a semblance of privacy. There was no question of removing the large metal cross that sits in the church, even though many of the new residents are Muslim.

One reason for the initial uproar, locals say, was that many of them learned about the plans in the newspaper.

“In the beginning, many older members of the parish couldn’t comprehend what was happening to the church they had been going to for so many years, but we’ve come a long way and people now appreciate the importance of Christian charity,” pastor Stefanie Zuechner said.

She said the city has promised to move the refugees out of the church and into newly built shelters by the end of February. Then it could reopen to the public, though Zuechner acknowledges that only about 20 residents used to show up on Sundays when services were held.

For the refugees themselves, the main complaint is the cramped conditions in the church.

Zabyl Olabi and her husband Mahmod, who came to Germany with their 18-year-old son Humam, owned a chicken breeding farm in Aleppo. They fled to Europe six months ago, when their house was destroyed during an air raid and Islamic State militants advanced towards the city.

“As you can see I am not Christian,” Olabi said, pointing to her headscarf. “So at first it seemed strange to us to live in a church. Now we’re just exhausted and wondering what comes next.”