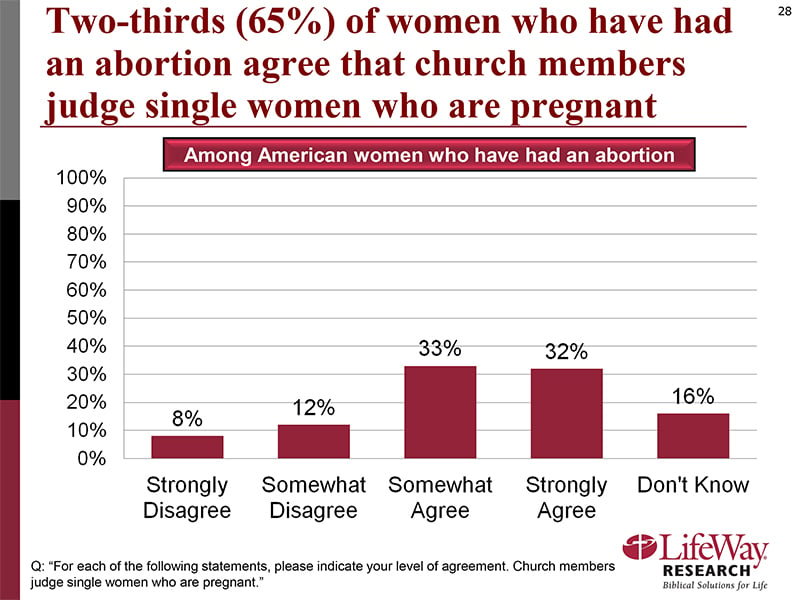 (RNS) Fear of gossip and judgmental reactions routinely prevents churchgoing women who are considering an abortion from first seeking the counsel of pastors or others in their church, according to a new survey by an evangelical polling group.

The survey was conducted by LifeWay Research, associated with the Southern Baptist Convention, and sponsored by the Care Net network of anti-abortion pregnancy centers. California recently passed a law, following a campaign by abortion rights groups, to regulate such centers, which seek to prevent abortions.

READ: Will Trump ruin Thanksgiving? What surveys say about our faith-and-family holiday

The survey of 1,038 women who have had abortions, released earlier this week, asked respondents about their church attendance, who they talked to before they made a decision, and their perceptions about church attitudes concerning abortion.

While other polls have shown a strong correlation between church attendance and anti-abortion views, the LifeWay survey found that 36 percent of the women were attending a Christian church once a month or more at the time of their first abortion. More than three out of four told LifeWay that their church had no influence at all in their decision to terminate pregnancy, and 65 percent said they felt church members are judgmental about single women who are pregnant.

Catherine Walker, who runs the Chicago-area Life After Decision, a church-based outreach to women after abortion, recognizes such sentiment.

“I have (counseled) over 30 women in my ministry. None of them ever mentioned talking directly to any church staff or minister,” said Walker, who had four abortions herself starting in 1979.

“Their shame and guilt is so strong.”

Scott McConnell, vice president at LifeWay Research, conceded that the numbers of church-attending women who have had the procedure is “sobering,” but said there was a silver lining for people who want to see fewer women ending their pregnancies.

“The biggest thing is to see the opportunity,” he said, adding that if pastors “can change the culture in the church to make it safe, six times more women will have that conversation at church before they make the call.” 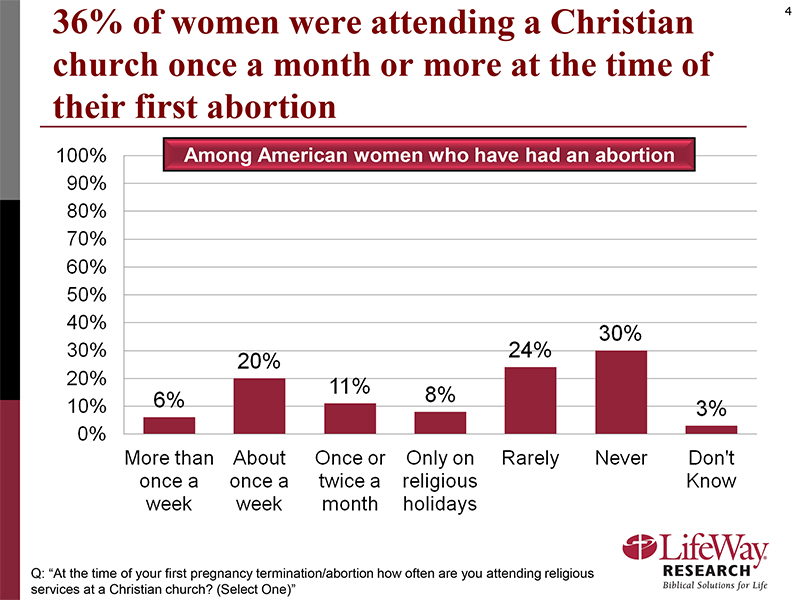 In the U.S., there are about 1 million elective abortions per year and 85 percent of women who have abortions are unmarried, according to the Centers for Disease Control and Prevention.

“Churches are already in a position to make an impact on the numbers of abortions in America,” McConnell said. “I just don’t think pastors and church leaders have really noticed that.”

The survey found that seven in 10 women who had an abortion identified themselves as Christian. Breaking that down, Catholic women represented 27 percent; Protestant, 26 percent; and nondenominational, 15 percent. Among Protestants, the top three denominations represented among women who had abortions were Baptist (33 percent), Episcopal (6 percent), Church of Christ (4 percent).

McConnell acknowledged that church staff may think they are offering help, but the message is not getting through to women facing unplanned pregnancies.

“There hasn’t really been a lot of conversation or preaching or anything about Christians having abortions,” said Roland Warren, the new president of Care Net, the national network of crisis pregnancy centers that sponsored the survey.

There has been increasing pressure from abortion rights organizations to regulate the pregnancy centers through legislation, such as California’s Reproductive FACT (Freedom, Accountability, Comprehensive Care and Transparency) Act, which Gov. Jerry Brown signed into law in October.

“We wish we could get crisis pregnancy centers to stop spreading scientifically unsound messages,” Amy Everitt, director of NARAL Pro-Choice California, said in an interview with Mother Jones magazine.

There are about 170 crisis pregnancy centers in California and about 40 percent are licensed by California as providers of medical services. The California Catholic Conference is planning to challenge the law.