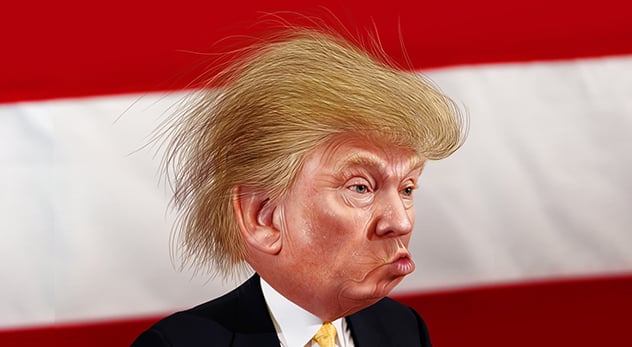 Among presidential candidates, most Americans say Trump would be most likely to say something inappropriate and ruin the fun. (Image courtesy of DonkeyHotey - http://bit.ly/1YujHNH)
November 25, 2015
Jonathan Merritt

Among presidential candidates, most Americans say Trump would be most likely to say something inappropriate and ruin the fun. (Image courtesy of DonkeyHotey - http://bit.ly/1YujHNH)

When it comes to Thanksgiving, many Americans think Donald Trump is the crazy uncle of presidential candidates.

According to a poll of 1,360 Americans by Public Policy Polling, 46 percent of Americans think Donald Trump is the presidential candidate most likely to say something inappropriate and ruin Thanksgiving dinner. Hillary Clinton came in second place at 22 percent and Trump's closest contender, Ben Carson, scored a mere 6 percent. The poll also showed that only 11 percent of GOP voters said they supported the President's decision to pardon two turkeys (named Macaroni and Cheese) last year instead of the customary one.

But Trump's holiday riskiness isn't the only revealing stat from Thanksgiving surveys. Here are five fun findings from recent polls about the holiday:

1) Almost everyone celebrates Thanksgiving, but the holiday still plays second fiddle. About 90 percent of Americans will celebrate Thanksgiving this week, but only 19 percent say the holiday is their favorite. Most Americans think Christmas is the king of all holidays, even though most also say Thanksgiving is too early to play Christmas music. 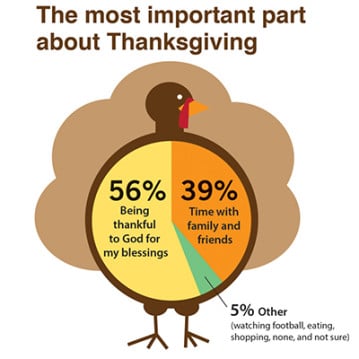 2) Thanksgiving is all about faith and family, not food or football. The emergence of Black Friday has added a consumeristic element to the holiday, and there are always interesting football pairings on this day in November. But according to a new LifeWay Research poll, 56 percent of Americans say the most important part of this holiday is "being thankful to God for my blessings." Thirty-nine percent say "time with family and friends" is most important part. According to another poll, more than three in four Americans will pray when they gather this week.

3) Side dishes vary by region. In the Southeast, where I grew up Macaroni and Cheese is the most popular side dish, but in the Northeast where I live now, squash is the most common. Check out this map to see which side dish comes in first place where you live.

4) Pumpkin Pie reigns supreme among desserts. Several surveys have shown that, when it comes to dessert, most Americans prefer Pumpkin Pie. Apple and pecan pies are also quite popular, but this doesn't explain why chocolate can't seem to make a strong showing at Thanksgiving. Come on, people!

5) Mashed beats out sweet in the great potato debate. Americans prefer mashed potatoes to sweet potatoes by 55 percent to 34 percent. If sweet potatoes are served, the topping matters. Fifty-four percent of Americans say that marshmallows don't belong on top of sweet potatoes--a number that should restore your faith in our nation. An oatmeal topping like my mother makes is really the only sane choice.

6) Cranberry sauce is more divisive than you may assume. If you're like me, you're probably thinking, "Who still eats this terrible gelatinous concoction anyway? The Great Depression ended nearly a century ago, folks!" But while only 42 percent of young voters like cranberry sauce, a whopping 80 percent of seniors still want it.

7) No matter what you choose to eat, you probably eat too much of it. On average, Americans consume about 4,500 calories at Thanksgiving. An average male would have to run 32 miles to burn off that many calories.