The ‘Splainer (as in “You’ve got some ‘splaining to do”) is an occasional feature in which RNS staff give you everything you need to know about current events to hold your own at the water cooler, or a Thanksgiving dinner. 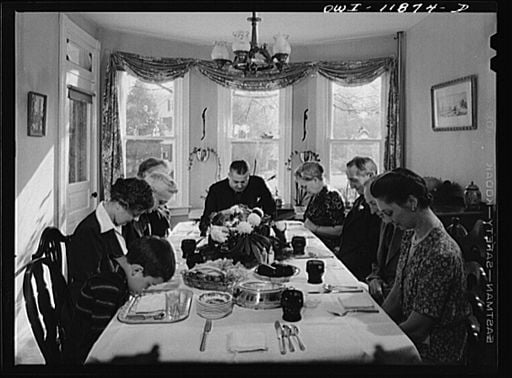 A family says grace before Thanksgiving dinner at the home of Earle Landis (1942).

(RNS) Thursday is Thanksgiving, the annual food fest that sometimes devolves into a food fight. So if the conversation around the turkey starts to get a little heated — “Why aren’t you married yet?” “Who are you voting for?” “Refugees, anyone?” — grit your teeth and keep in mind: The impulse to give thanks — in either a religious or secular setting — can be be good for the body and soul. Let us ‘Splain …

Q: Where does the tradition of giving thanks come from in the first place?

A: The answer is both religious and secular. Almost every world religion requires its followers to give thanks to a divine being, often in prayer, song and deed. The Book of Psalms is full of praises of thanksgiving. The Talmud tells Jews to give thanks for their blessings 100 times a day; the Quran tells Muslims “God always rewards gratitude and He knows everything.” Nonbelievers give thanks, too, as the growing number of secular thanksgiving “prayers” attest.

Robert Emmons, a University of California psychology professor and author of “Gratitude Works!,” says gratitude is “profoundly basic” to the human condition. “When we are grateful for something we consider its origins. Where did it come from, who was responsible for it, why and for what purpose does it exist, what should I do about it? These questions strike me as profoundly religious.” (1963) Close the mind’s eye to sidewalk, fence and modern dock and the scene viewed is that of the Mayflower, anchored off Provincetown, Mass., in November 1620. Pilgrims, who sailed from Plymouth, England, on Sept. 6 of that year, can be visualized descending from the ship into the shallop (open sailing-rowing boat) at the Mayflower’s side to explore land suitable for settling. The Mayflower II, today anchored in Plymouth Harbor, recalls that early beginning of America. Religion News Service file photo

Q: How did we go from the religious practice of giving thanks to a secular holiday of Thanksgiving?

A: The holiday, of course, has its roots in a celebratory meal between the Puritans and Native Americans in Plymouth, Mass., in 1621. The Puritans frequently held days of giving thanks — a somber kind of extra Sabbath, often with fasting, silence and prayers. The local Wampanoags also routinely gave thanks for a plentiful harvest or other good fortune. There were numerous “proclamations of thanksgiving” made by the Continental Congress, often with language recognizing a religious duty to give thanks. Thanksgiving didn’t become a national holiday until 1863, when, in the midst of the Civil War, President Abraham Lincoln declared that the U.S. would “observe the last Thursday of November next, as a day of Thanksgiving and Praise to our beneficent Father who dwelleth in the Heavens. ”

Fun Thanksgiving fact: Lincoln was pressured to create Thanksgiving by one of the first women poets in the U.S., Sarah Josepha Hale, author of “Mary Had a Little Lamb.”

Q: Is one day a year enough to count our blessings? How often should we give thanks?

A: The answer seems to be the more, the merrier. Emmons’ multiple studies of gratitude show that people who pause to count their blessings daily report they are 25 percent happier than people who don’t. He also found that thankful people exercised daily, reported fewer illnesses and had higher levels of energy and alertness. Other scholars have studied the benefits of gratitude — there’s even a program on the “science of gratitude” at the University of California, Berkeley — and researchers find that giving thanks regularly improves romantic relationships and can be a kind of natural anti-depressant.

Q: OK, giving thanks is good for my body. But what about my soul?

A: That takes us back to the religious foundations of giving thanks. Bradley Malkovsky, a professor of comparative theology at the University of Notre Dame, says giving thanks is “spiritually good for us … a training in connectivity, of getting beyond the ego” to each other and to the divine. “If we look closely at our lives, we see so much of what we have achieved is a gift,” both from other people and from God, he said. “Gratitude is the recognition that we are not the center of the universe.”