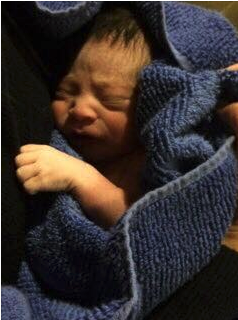 A newborn baby, found in the manger of the nativity scene in front of Holy Child Jesus Church in Queens, New York, is shown on the church’s Facebook page.

NEW YORK (Reuters) – A newborn with his umbilical cord still attached was found lying in a manger at a New York church, police said on Tuesday.

At Holy Child Jesus Church in the borough of Queens on Monday, the custodian found the crying infant wrapped in towels in the indoor nativity scene he had set up just before his lunch break, a New York police spokesman said.

Father Christopher Ryan Heanue, one of the priests at the church, said he and others placed a clean towel around the baby while waiting for paramedics to show up.

“The beautiful thing is that this woman found in this church – which is supposed to be a home for those in need – this home for her child,” Heanue said, referring to the person he assumes left thebaby there.

“A young couple in our parish would love to adopt this child and keep this gift in our community. It would make a great Christmas miracle,” Heanue said.

Paramedics took the healthy baby to Jamaica Hospital and police are investigating the incident, the police spokesman said.

Under New York state law, a parent may abandon a newborn anonymously at certain designated safe haven locations, as long as the baby is handed over to an appropriate person.

Church pastor Christopher Heanue wrote on the church’s Facebook page that the baby was a boy and weighed a little more than 5 pounds.