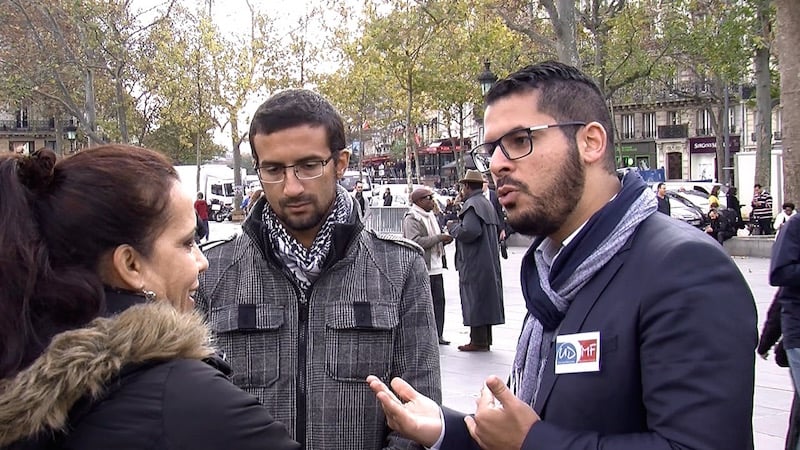 UDMF members talk to a potential voter at the Republique square. RNS photo by Elizabeth Bryant

MONTREUIL, France (RNS) Khalid Majid and his aides stride past piles of napkins, shirts and plastic watches at the weekly market here, scouting not good deals but for votes.

On a frigid morning, he pushes fliers at a clutch of men selling clothes. “Our children live in France, our lives are here,” he tells them, as one nods in agreement. “We must also have our say — not just as Muslims but as French.”

Majid is a manager at the SNCF rail company. But he’s getting name recognition these days as president of the fledgling Union of French Muslim Democrats, or UDMF party, which is making its first run in regional elections.

The first round on Sunday (Dec. 6) comes at a difficult time for France, as the country emerges from its second wave of terrorist attacks in less than a year. With a state of emergency in force and mounting fears of radical Islam, polls show the far-right National Front party is surging on a law-and-order, anti-immigrant platform, even earning some Muslim votes. For its part, the two-year-old UDMF hopes to counter a rising tide of Islamophobia and give France’s five million Muslims a greater political voice.

These clashing visions of Islam and politics are captured in ethnic working class suburbs around Paris, where the National Front has parked posters bearing two faces of the same woman — one wearing a ski cap and the country’s national colors and the other in a niqab — with the tag line: “Choose your suburb.”

“Islam and the banlieues (suburbs) have become the center of the political debate,” said Alexandre Piettre, a sociologist at the GRSL, or Societies, Religions and Secularity Group, a Paris-based think tank. “So it’s normal that a population that always feels itself stigmatized searches for a way to express itself. That’s the electorate the UDMF is tapping.”

The party is campaigning in the Ile de France region around the French capital. It doesn’t expect to win many votes. Just getting Muslims to the polls, especially young Muslims, would count as a first success. Many who traditionally vote left are increasingly disillusioned by the ruling Socialist party.

“For the past decade, Muslims have been seen through the prism of terrorism, fundamentalism and jihadism,” said Nizarr Bourchada, who heads the UDMF’s regional ticket. “We want to show that Muslims today participate socially and economically and will also participate politically.”

Many UDMF candidates are solidly middle class and upwardly mobile. Half are women, and many don’t wear veils. The party is campaigning on bread-and-butter issues like education, jobs and the environment, with platforms similar to other leftist parties. But it’s also weighed in on areas like repealing a school veil ban that strike a chord among Muslims. 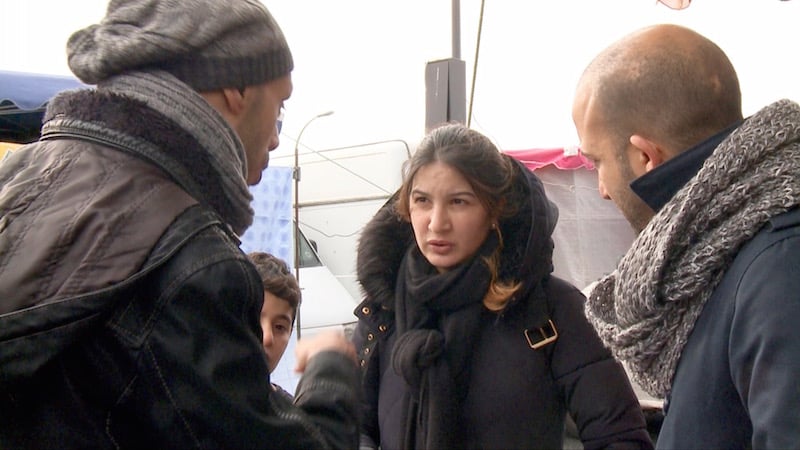 In Montreuil, Majid chats with 28-year-old mother Ferroudja Ghersbousbele about school canteens, a hot-button issue after some right-wing mayors banned offering alternatives to pork. The UDMF wants a vegetarian option. “That’s secularism,” he tells her.

“When I was a kid, we lived normally, we didn’t categorize different religions,” said Ghersbousbele, who is bare-headed but supports a woman’s right to veil. “Now they’re trying to isolate us, to put us in a group.”

Especially after the recent terrorist attacks, for which the Islamic State group has claimed responsibility, she believes Muslim politicians can play a role “in showing that we’re not like them.”

If the UDMF does not define itself as a religious party — Bourchada calls it “serenely secular” — it is not the first European movement to assert its Muslim roots. Others have cropped up in the Netherlands and Britain with little backing or lifespan. In Alsace, a Muslim party founded in 1997 similarly petered out.

But today, sociologist Piettre believes the UDMF is surfing on a larger sense of Muslim identity that has been gathering steam across Europe. “It’s a kind of assertion of citizenship, and the UDMF fits into this dynamic,” he said, especially in France, where many Muslims feel discriminated against.

While the party’s score in the regionals is likely to be negligible, it could “nibble” some gains in immigrant-heavy communities, Piettre says, and build enough support over time to strike alliances with other political parties. “The fact they embrace their attachment to secularism and the French Republic can help in de-demonizing Muslims,” he added, speaking of the candidates. “As these people appear in the media and get better known, they’ll be seen in a different way.”

But the opposite may also happen. The party tried running for local elections after the first Paris attacks in January, but withdrew amid mounting Islamophobia, partly fed by French author Michel Houellebecq’s novel “Submission,” about a Muslim party in power.

Today, other analysts believe the UDMF may further stigmatize a Muslim population that mostly wants to fit in. “If French Muslims want to be heard, they have to join traditional parties,” said Elyamine Settoul, a researcher at the Paris Institute for Political Studies, who believes the UDMF’s impact will remain “marginal.”

At the National Front’s Paris office, Wallerand de Saint Just goes further, claiming the party is stoking divisions. “The difficulty with Islam is it puts religious law ahead of civil law,” said de Saint Just, who is heading the Front’s ticket in Ile de France. “To run for elections in this religious, sectarian fashion is not acceptable.”

But UDMF candidates say they can help bridge divides. Shortly after the Paris attacks, many marked a moment of silence for the victims at the city’s Place de la Republique, then spent time explaining their platform.

“We can share a lot of things,” Majid says. “We can build a different country, if we do it together.”

(Elizabeth Bryant is a Paris-based contributor to RNS.)