Last week, I had the privilege of finally seeing the much-anticipated “Spotlight.” This powerful film focuses on the true story of an amazing group of journalists from the Boston Globe who worked alongside brave and tireless abuse survivors and a relentless plaintiff’s attorney to expose the untold horrors of child sexual abuse and cover up in the Boston archdiocese in 2002. What finally surfaced was hundreds of offending clergy and over 1000 victims in Boston alone.

Though I think everyone should watch this film, I especially think that my fellow Protestants can learn much from seeing it. However, learning will require a humility that enables us to be slow in pointing the finger at others, and quick to the difficult and sobering task of self-examination.

Some may be tempted to watch this film with disgust for the Catholic Church and a sigh of relief for Protestant churches. Such relief would be unfounded and misplaced. A number of years ago, the three companies that insure most Protestant churches reported that receiving approximately 260 reports a year of minors being sexually abused by church leaders and members. This is compared to the approximately 228 “credible accusations” a year of child sexual abuse reported by the Catholic Church. (Both numbers are much higher due to underreporting and the manner in which such information is collected and determined – that is another blog for another day.) In reality, the likelihood is that more children are sexually abused in Protestant churches than in Catholic churches. Regardless, the abuse of one child is one child too many. Instead of pointing fingers, we should be learning from each other and working together to bring an end to this epidemic that permeates all of Christendom. In order to do this, Protestants are going to have to accept the fact that we have many more similarities than differences with our Catholic brothers and sisters when it comes to how we have failed to protect and serve God’s children. Here are just three that surfaced in “Spotlight”:

Clergy who abuse: “When you’re a poor kid from a poor family and when a priest pays attention to you, it’s a big deal. How do you say ‘no’ to God?”

These were the gut-wrenching words of Phil Saviano, a clergy abuse survivor (and member of SNAP) who was attempting to describe the dark dynamics of how his nightmare began. In a later scene, another survivor explains, “He offered to get me ice cream. It’s a priest. I’m a kid. So I go.” 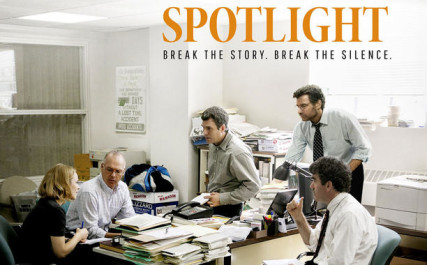 The case of “Spotlight” – courtesy of Open Road Films

The evil perpetrated by those who use their religious cover to access and abuse children is alive and well in Protestantism. My friend Christa Brown, who was sexually abused by her Baptist youth pastor, writes, “Eddie [pastor] always said that God had chosen me for something special. I guess I really wanted to believe that. Doesn’t every kid want to think they’re special? Besides, who was I to question a man of God? It wasn’t my place.” The sinister reality is that sex offenders who hold positions of authority while carrying Bibles and quoting scripture are treacherous, regardless of whether they are called priest, pastor, or reverend. It’s not just a Catholic problem.

Protecting Reputations: Much of “Spotlight” focuses on the inordinate and distorted efforts taken by the Boston Archdiocese to protect its own reputation from the horrors being perpetrated by its priests.  In most cases, the Church accomplished this by moving offending priests and silencing victims. Abusing priests were either transferred to new parishes or temporarily removed under the guise of “sick leave” and sent to live with other offending priests in homes located throughout Boston (many located in neighborhoods with unsuspecting children). Prior to the exposure of these crimes and cover-ups, victims were systematically coerced into silence by false assurances, small sums of cash, confidentiality agreements, and lots of guilt and shame.

As I watched this all unfold on the screen, I couldn’t help but recall the countless cases I have encountered in Protestant circles where offending pastors, missionaries, and other leaders have been reassigned or allowed to quietly resign all in an effort to insulate the institution. The youth pastor who rapes a child and is transferred to a new church and given a going away party; the pedophile missionary physician who is quietly sent home from the mission field; the church volunteer who admits to sexually abusing a child and is simply directed by the church leadership to move quietly to another state. The list could go on and on. It’s not just a Catholic problem.

In addition to quietly moving or reassigning offenders, many Protestant institutions are no less savvy than the Boston Archdiocese in using money, shame, and guilt to influence survivors and their families to remain silent. The missionary child who is made to sign a “confession” for her responsibility in being repeatedly sexually abused by an adult missionary; the pastor who spends his days attempting to shame and threaten a sexual abuse survivor who speaks up about how the church failed to properly respond to her abuse disclosure; the ministry that exploits the poverty of victims by giving them a pittance of money in exchange for waivers and confidentiality agreements. The list could go on and on. It’s not just a Catholic problem.

Silent Bystanders: Another disturbing truth that surfaced in “Spotlight” was the deafening silence that surrounded the sexual abuse of children that had permeated inside the Church in epidemic proportions. A silence usually fueled by wanting to protect friendships and reputations. For example, a friend of Archbishop Bernard Law admonished one of the reporters to remember all the “good” the Archbishop had done when considering whether to expose his complicity in protecting pedophile priests. Sometimes the silence seemed fueled by deliberate ignorance. A powerful scene in the film was when one of the reporters attended a Catholic charity event shortly after an emotional interview with a victim. He finds himself amongst Catholics who are celebrating the good deeds of the Church and seem oblivious to the countless numbers of lives that had been silently eviscerated by that same Church. The gala was a picture of a modern day gathering of Priests and Levites celebrating their great “religious” accomplishments, all the while stepping over those dying in their midst. Too many  chose to simply look the other way.

That same deadly silence permeates inside many Protestant institutions. For example, many Protestant leaders who aren’t shy about speaking out on a wide variety of spiritual and cultural issues will often refuse to speak out against specific cases of child sexual abuse. They defend such silence by claiming something like, “We don’t know all the facts and don’t want to tarnish the reputation of someone who has done so much good.” Tragically, what often seems to be the real reason behind such silence is a fear of losing friendships, speaking engagements, book contracts, and other types of “influence”. It’s not just a Catholic problem.

Silence is not just limited to leaders. Just like in the Catholic Church, too many within Protestant congregations prefer to remain ignorant on the prevalence of child abuse within our churches, organizations, and mission fields. We consume ourselves with evangelism programs, pro-life activities, and other good causes, all the while ignoring the blatant reality that children and adult survivors are suffering in our midst. We convince ourselves that being ignorant gives us the excuse to be silent. Such toxic silence makes us complicit in this wickedness by placing children at risk, re-traumatizing survivors, and emboldening offenders. It’s not just a Catholic problem.

I want to end on a more positive note.  In recent years,  I have encountered more and more Protestants who are opening their eyes to the realities of child sexual abuse within our churches and beginning to acknowledge the urgent need to something about it. My prayer is that films like “Spotlight” will help enable us to move beyond vague platitudes and empty actions. Perhaps, we can start by acknowledging our failures and begin seeking ways to live out real repentance to the many precious lives lying beaten and wounded in our midst.

A start many have been waiting a very long time for, including Jesus.

Catholicism
Vatican cardinal sues for defamation in Quebec assault claim
Follow us on Facebook!
Submit your photos to RNS