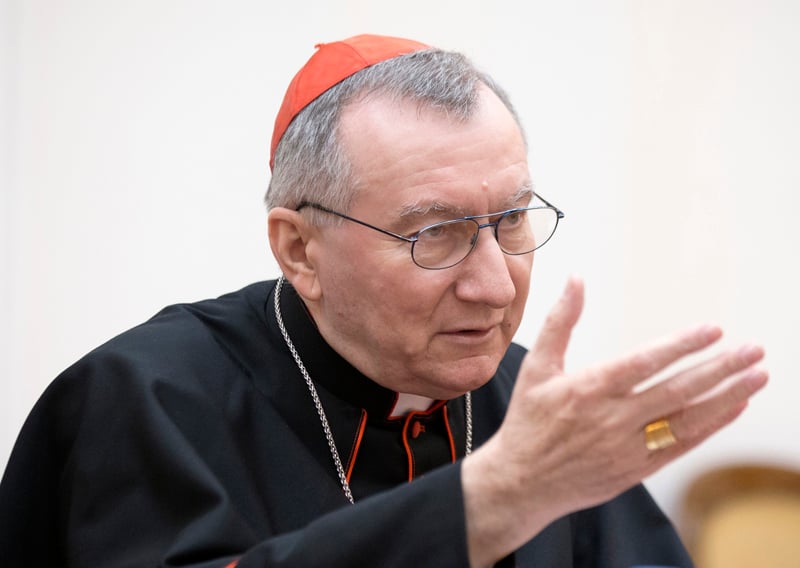 Cardinal Pietro Parolin, the Vatican’s secretary of state, speaks during his official visit with Belarusian Foreign Minister Vladimir Makei in Minsk, on March 13, 2015. Photo courtesy of REUTERS/Vasily Fedosenko
*Editors: This photo may only be republished with RNS-VATICAN-LEAKS, originally transmitted on Dec. 7, 2015.

VATICAN CITY (RNS) A Vatican court on Monday (Dec. 7) named the Holy See’s second-ranking official after the pope, Secretary of State Cardinal Pietro Parolin, as a witness in a controversial trial in which two journalists and others stand accused of leaking secrets about Vatican finances.

Cardinal Santos Abril y Castello, a confidant of the pope and a member of three Holy See congregations, was another high-profile Vatican official named as a witness in the trial. Polish Archbishop Konrad Krajewski, who personally distributes alms to the needy, was also to be called.

In the latest hearing of the so-called “Vatileaks” trial, in which two journalists, a laywoman, a priest and his assistant are accused of divulging confidential information, the court also rejected two notable requests.

In the first, the court rejected a request by the priest, the Rev. Lucio Angel Vallejo Balda, who asked to undergo a psychological assessment. In explaining the decision the court said the legal system does not allow for psychological tests, only psychiatric ones, and that the relevant aspects of a defendant’s personality would become clear during the trial.

A previous psychiatric assessment of Vallejo Balda will be made available, the Vatican said in a statement.

On a second motion, the court dismissed an argument by Vallejo Balda’s co-defendant, Italian public relations executive Francesca Chaouqui, who said the Vatican tribunal did not have jurisdiction because the alleged crimes happened in Italy. Her lawyer also claimed that she is a “political refugee” in Italy.

The judges who make up the court deliberated in private for an hour before rejecting both Vallejo Balda and Chaouqui’s requests. But they did agree to the latter’s request for an evaluation of the computer and phone evidence. A number of defense lawyers will also be given greater access to evidence, including email and text transcripts.

In its description of the morning’s procedures, the Vatican made no mention of any specific requests made by Vallejo Balda’s former assistant, Nicola Maio, or Italian journalists Gianluigi Nuzzi and Emiliano Fittipaldi.

The inclusion of Nuzzi and Fittipaldi in the trial, after both published books in November based on leaked Vatican documents, had led to widespread criticism of the Vatican’s apparent rejection of press freedom.

In seeking to distance the Holy See from the controversy, the Rev. Federico Lombardi, the Vatican’s chief spokesman, issued a detailed statement on Monday saying many of the criticisms were “inappropriate, or at times entirely unjustified.”

Lombardi described the Vatican City State courts as having “all the procedural guarantees characteristic of the most advanced contemporary legal systems.” Among other things, he said, these include an independent and impartial tribunal, the presumption of innocence and the right to defense.

At the start of the trial on Nov. 24 both Nuzzi and Fittipaldi complained of being given court-appointed lawyers, rather than having access to their Italian legal teams. Lombardi, however, said a lawyer must be qualified to practice in the Vatican, a country operating its own legal system, in order to defend a client at its courts.