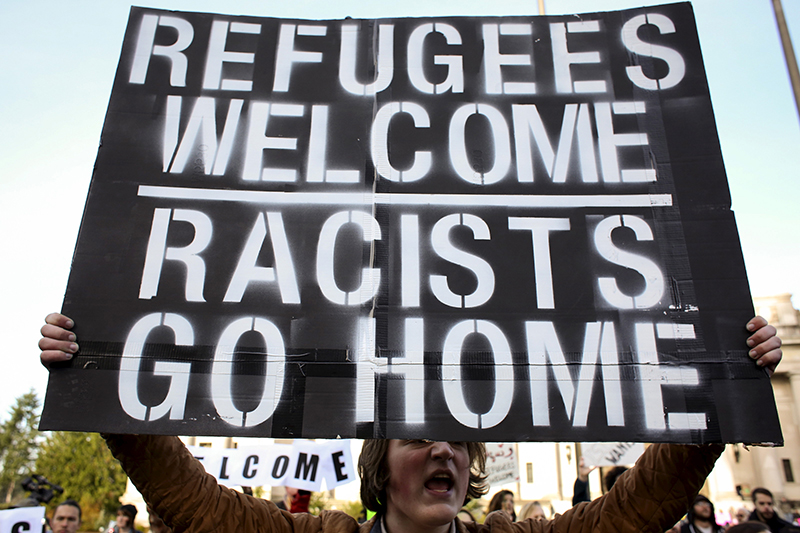 A pro-refugee counterprotester shouts during another group’s protest against the United States’ acceptance of Syrian refugees at the Washington state capitol in Olympia, Wash., on Nov. 20, 2015. Photo courtesy of REUTERS/David Ryder
*Editors: This photo may only be republished with RNS-REFUGEE-STATES, originally transmitted on Dec. 10, 2015.

(RNS) More than half of the nation’s governors declared their state’s borders closed to Syrian refugees after the Nov. 13 terrorist attacks in Paris. But some churches and faith-based agencies are defying such orders, saying their faith tells them to open their doors to the stranger.

Here are some of them:

1.Georgia: Johnson Ferry Baptist Church, a Southern Baptist megachurch north of Atlanta, has helped resettle a Syrian family, despite an order from Gov. Nathan Deal that the state would not accept Syrian refugees.

Bryant Wright, the church’s pastor and former president of the Southern Baptist Convention, told CNN Wednesday (Dec. 9) he understands the governor is “concerned about the security of the citizens of the state. But as Christians and as a church, we want to reach out with the love of Christ to these folks.”

He told The Atlanta Journal-Constitution that his church had been planning to help the family before the recent attacks in France.

2. Indiana: The Catholic Archdiocese of Indianapolis defied Gov. Mike Pence by welcoming a Syrian family that arrived in the city on Monday (Dec. 7).

Archbishop Joseph W. Tobin said  the day after the family arrived that he had “prayerfully considered” the governor’s request to defer their arrival until Congress approved new legislation regarding immigrants and refugees, but went ahead as planned.

Pence disagreed with the archdiocese’s action but said he would not block food stamps and other state aid for the family, the Indianapolis Star reported.

3. Ohio: Westminster Presbyterian Church of Wooster, Ohio, has volunteered to accept up to three refugee families from Syria or elsewhere.

“As Christians and as part of the human family, we are moved to put our faith into action when we see the unfathomable need of our siblings,” said the Rev. Andries Coetzee, pastor of the church in a Nov. 30 announcement. “It is our duty to remind those in power that we do have a responsibility to care for Syrian refugees, especially as our foreign policy is part of the root cause of the refugee crisis.”

Gov. John Kasich, a GOP presidential candidate, has written to President Obama, asking him to halt acceptance of Syrian refugees.

4. Texas: Refugee Services of Texas, an affiliate of several Christian refugee organizations, settled six Syrian refugees in Houston on Monday, The Associated Press reported. It expects to settle nine more before the end of the week.

“We can reassure all Texans that the refugees are receiving a warm and compassionate welcome from staff and volunteers,” said Aaron Rippenkroeger, president and CEO of Refugee Services of Texas, according to The AP.

Gov. Greg Abbott is working with Sen. Ted Cruz, R-Texas, another presidential candidate, on the State Refugee Security Act, proposed legislation that would allow governors to reject refugees who are deemed to be a security risk.

(Adelle Banks is production editor and a national reporter for RNS)