(RNS) Religious groups are pushing back against a wave of opposition toward Syrian refugees and working to preserve the U.S. as a haven for them.

“We’re really in emergency mode,” said Jen Smyers, director of policy and advocacy for the Immigration and Refugee Program at Church World Service, one of the nine U.S. nonprofits that work with the federal government to resettle refugees.

“We’re talking to the media nonstop. We are sending letters and petitions and making phone calls to all the governors as well as to members of Congress right now,” she said. “Every voice is needed to make sure they understand just how important the resettlement program is.”

The Refugee Resettlement Program program — which relies mostly on faith-based organizations to find homes, jobs and schools for refugees — is under attack, a casualty of the Islamic State group’s assaults on Paris Friday (Nov. 13) that killed 129 people. 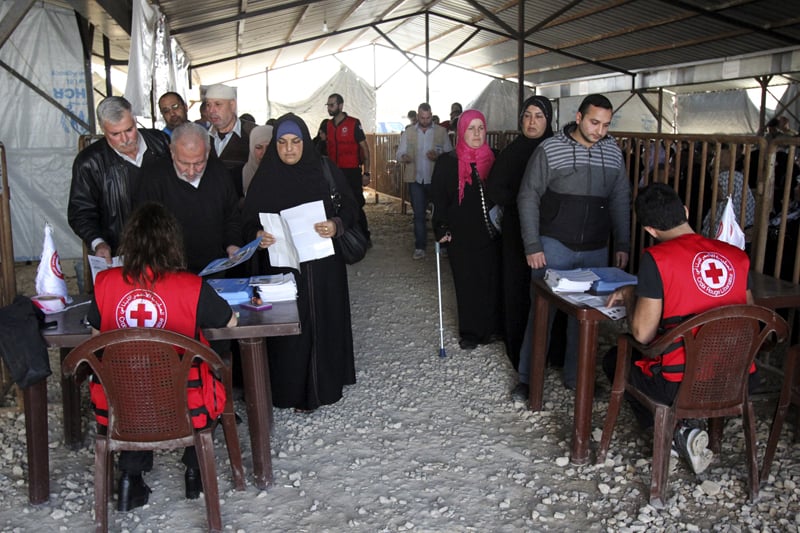 Syrian refugees line up to receive aid for the winter from the U.N. refugee agency in Tripoli, northern Lebanon, on Nov. 18, 2015. Photo courtesy of REUTERS/Omar Ibrahim
*Editors: This photo may only be republished with RNS-REFUGEE-RESETTLE, originally transmitted on Nov. 19, 2015.

Arguing that the federal government can’t assure that terrorists from Iraq and Syria, where ISIS makes its capital, won’t gain entry to the U.S. through the program, American politicians have sought to curb it, and by extension the work of its religious partners. In the wake of the carnage in France:

These latest developments on Capitol Hill have the nonprofits particularly worried. The resettlement program in recent years has annually welcomed between 70,000 and 80,000 people to the U.S., with about 2,200 from Syria since 2011. Just weeks ago they had high hopes that those numbers would increase.

Mounting numbers of Syrians, faced with civil war and terrorist threats at home, were boarding flimsy boats to escape and drowning in the Mediterranean. A widely circulated photo of a dead Syrian toddler, washed up on a Turkish beach, tugged at many American hearts. Obama in September said that the U.S. would increase the number of Syrians it would accept to 10,000 in the coming year.

Read: ISIS, ISIL, Daesh — explaining the many names for terrorists

Then the Paris attacks happened, ISIS announced that it would target New York and Washington, and news reports raised the possibility that one of the Paris bombers may have entered Europe amid a group of refugees. American politicians began lashing out against plans to bring more Syrians to America.

“What the political backlash has done is build a climate of fear, and for some people it is based in Islamophobia,” said Rabbi Jennie Rosenn, vice president for community engagement at the HIAS, formerly known as the Hebrew Immigrant Aid Society, one of the nine faith-based groups supporting the resettlement program.

They have been asked to explain to their representatives in Congress, Rosenn continued, “that the resettlement process shutting down would be antithetical to everything we believe as Jews and everything that America stands for as a refuge for vulnerable people.” 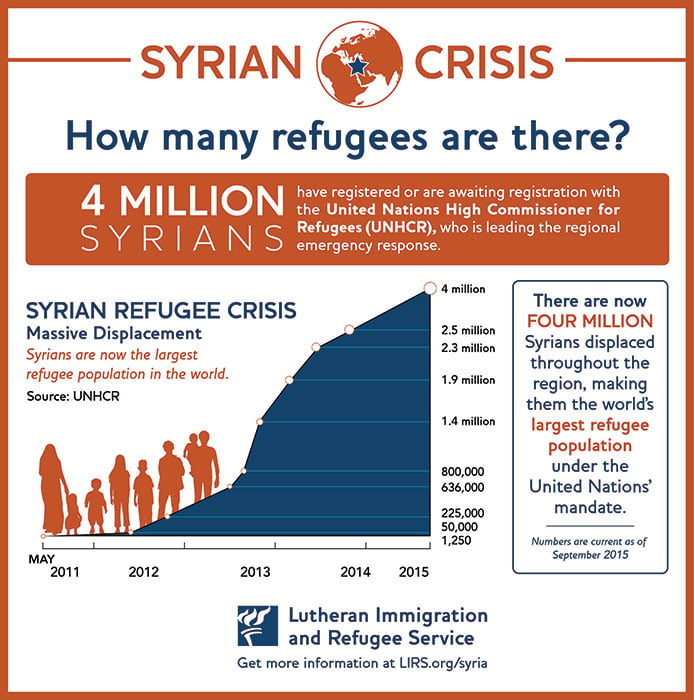 “How many refugees are there?” Graphic courtesy of Lutheran Immigration and Refugee Service

Six of the nine nonprofits that work with the program are faith-based, and guided by the biblical injunction to welcome the stranger. In addition to HIAS and CWS, they are: the United States Conference of Catholic Bishops, Lutheran Immigration and Refugee Service, Episcopal Migration Ministries, and World Relief.

In the past few days these groups have sent their leaders to Capitol Hill, hoping to derail the House bill and dissuade the Senate from supporting a similar measure.

They have hosted webinars and conference calls with their clergy and lay leaders, as Episcopal Migration Ministries did Thursday (and will do again Monday), to encourage sermons and local efforts to counter hostility toward the refugees.

And they have reached out to the media, to remind the public of the plight of the Syrians, and to reassure that the U.S. government carefully vets everyone accepted under the program.

READ: Want to see the pope? Get in line at the security checkpoint

“Let’s remember these refugees themselves are fleeing ISIS,” Linda Hartke, president of Lutheran Immigration and Refugee Service, told a Wisconsin television station this week after Gov. Scott Walker announced that the state would not help resettle any Syrians. Terrorists won’t use the resettlement program to gain entry to the United States, she said, because it takes so long and scrutinizes them so carefully — a sentiment repeated by many who work with refugees in the U.S.

But Republican politicians and even some Democrats say they’re less than convinced. They point to FBI Director James Comey’s testimony to Congress last month noting flaws in the vetting that have allowed into the U.S. two Iraqi refugees whose fingerprints had been found on improvised explosive devices.

Church leaders are trying to counter this “can’t be too careful” approach with the Bible, which repeatedly exhorts: “Do not be afraid.”

“Be not afraid,” said Episcopal Church Presiding Bishop Michael Curry in a statement released by the church on Wednesday. “We will not let the nightmare this world often is keep us from carrying out the words of Jesus who told us to be a neighbor to those in need.”