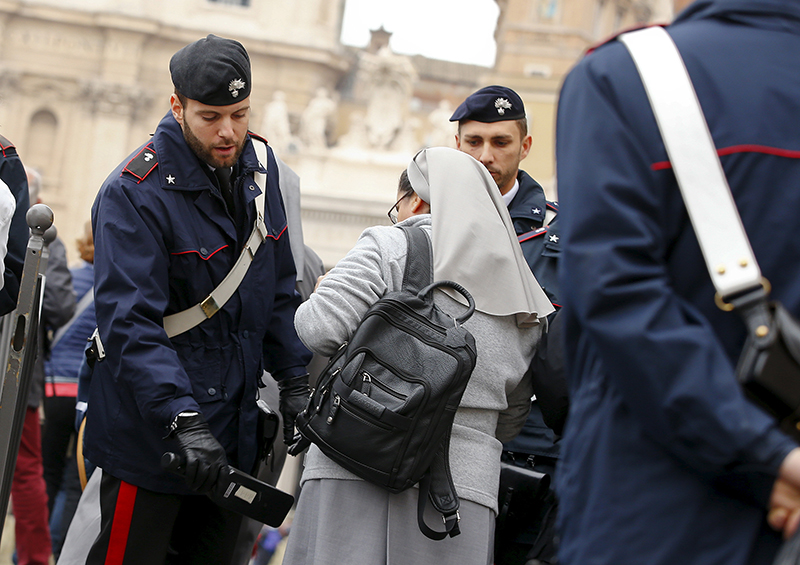 Italian Carabinieri officers check a nun as she arrives to attend Pope Francis’ Wednesday general audience in St. Peter’s Square at the Vatican on Nov. 18, 2015. Photo courtesy of REUTERS/Tony Gentile
*Editors: This photo may only be republished with RNS-VATICAN-SECURITY, originally published on Nov. 19, 2015.

VATICAN CITY (RNS) Even nuns in habits were subjected to a security checkpoint Wednesday (Nov. 18) during Pope Francis’ general audience, a weekly event that attracts thousands.

Hundreds of others were also searched before being allowed into the square.

The high state of alert follows a statement from the U.S. Embassy in Rome, identifying St. Peter’s Basilica as a potential target for terrorists.

“The Italian authorities are aware of these threats,” said the note, published Wednesday.

Two celebrated Milan sites — the city’s central cathedral and La Scala opera house — were also listed as possible targets, in addition to “general venues” such as churches and synagogues.

While the embassy did not explicitly tell U.S. citizens to stay clear of the Vatican, it encouraged them to stay up-to-date when planning their travels.

“U.S. citizens are advised to remain vigilant and aware of their surroundings,” the embassy said.

Italian media attributed the intelligence information to the FBI, although the U.S. Embassy to the Holy See would not comment on the source.

Italy has stepped up security after attacks in Paris on Friday, where militants from the terrorist group calling itself the Islamic State killed 129 people.

Rome has repeatedly been named as a target by the group, which is also known as ISIS, and while terrorists have attacked holy sites in the Middle East, in the West they typically hit secular venues, such as trains, business centers and in the case of last week’s Paris attacks, soccer stadiums, restaurants and concert halls.