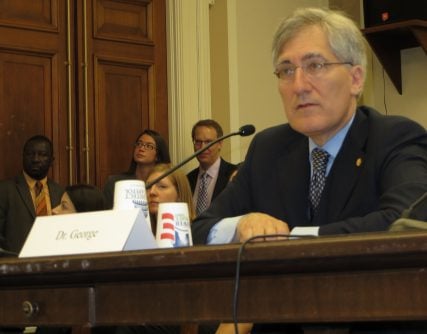 (RNS) Princeton political scientist Robert George, an intellectual leader of the religious right and outspoken Catholic culture warrior, was in the hospital but “out of danger” Friday (Dec. 11) after suffering a potentially life-threatening tear in his aorta.

George began feeling ill on Sunday evening and went to a hospital near Princeton, where tests confirmed that he had a mesenteric arterial dissection, or a tear in the inner layer of the aorta, the large blood vessel branching off the heart.

If the blood ruptures through the outside aortic wall it  “is often fatal,” according to the Mayo Clinic’s website.

Ryan Anderson, a friend of George’s who is a fellow at the Heritage Foundation, wrote on Facebook on Thursday night (Dec. 10) that George was being transferred to the NYP/Weill Cornell Medical Center in Manhattan to see a specialist in this rare condition.

“Robby sounded pretty good and quite lucid,” Anderson wrote, citing another friend of George’s who had spoken with him. “Surgery is a last resort, because it would be risky. Right now he is being pumped with blood thinners, so that circulation to the whole body is restored … Robby says that he is told that this can be a stable long-term solution, and thus that surgery might not be required at all.”

On midday Friday, Bradford Wilson, executive director of the James Madison Program in American Ideals and Institutions that George heads at Princeton, released a statement saying that George was “out of danger.”

“We are grateful for the prayers and good wishes of Professor George’s many friends and admirers here at Princeton and around the nation and world,” Wilson said. “We look forward to providing additional reports on Professor George’s recovery.”

Reports began circulating Thursday afternoon (Dec. 10) on conservative websites and on social media that George, whose Princeton homepage says that he is on leave this fall, had fallen ill, and that it was serious. GOP presidential candidate Jeb Bush was one of those tweeting a request for prayers for George.

George, a Republican who makes no bones about his partisanship, has for years been a paladin of social conservatism, leading the charge against gay marriage and abortion and staking out ground as one of the sharpest critics among Catholics of President Obama.

Yet he also regularly lectures with his friend and former Princeton colleague, the famously left-wing Cornel West, who is currently Professor of Philosophy and Christian Practice at Union Theological Seminary.

George, who is a youthful 60 years old, goes by “Robby” and is known for his passion for bluegrass banjo picking.

His many friends and fans quickly began posting prayers and good wishes on his Facebook page and on Twitter:

Please join me in praying for Robert P. George @McCormickProf this evening as he’s been hospitalized in serious condition.

George is also a well-known as the chairman of the U.S. Commission on International Religious Freedom. He is connected to numerous conservative think tanks and is co-founder of the National Organization for Marriage and founder of the American Principles Project, both of which promote social conservatism. 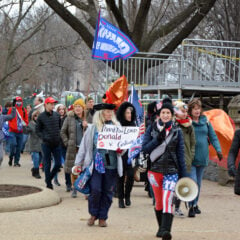 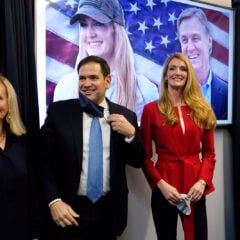