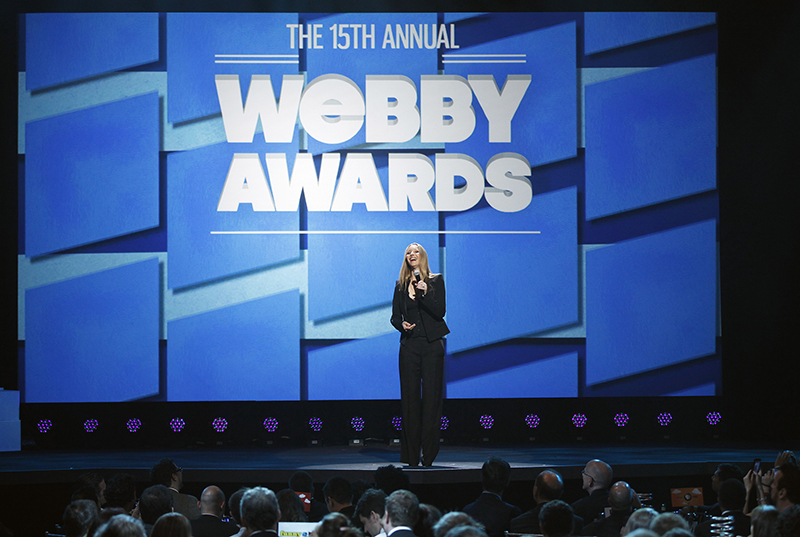 Actress Lisa Kudrow speaks on stage as she hosts the 15th annual Webby Awards in New York on June 13, 2011. Photo courtesy of REUTERS/Lucas Jackson
*Editors: This photo may only be republished with RNS-WEBBY-RELIGION, originally transmitted on Dec. 17, 2015.

(RNS) The most coveted award for work on the Internet bestows honors in 231 categories, but “Religion & Spirituality” is no longer one of them.

A producer of the Webby Awards, now in its 20th year, cited fewer submissions to the category.

“Last year, the category received very little interest,” Gilley continued. “Therefore, it was retired to make room for the addition of some new categories.”

Some who work at the intersection of the Internet and religion expressed disappointment in the decision.

“Since coverage of religion and spirituality in the mainstream media continues to diminish, access to this coverage on the Web becomes more and more important, and so it’s disappointing that this category is being eliminated,” said Arnie Labaton, executive producer of “Religion & Ethics,” a weekly news show of the Public Broadcasting Corp. Its website has won Webbys in the past.

Called “the Internet’s highest honor” by The New York Times, the Webbys were founded in 1996, when they recognized work in 15 categories. Presented by the International Academy of Digital Arts and Sciences, the Webby Awards now includes categories for everything from shopping apps to political blogs. Last year more than 13,000 entries came from 70 countries.

The Webby Awards ceremony is usually held in May.