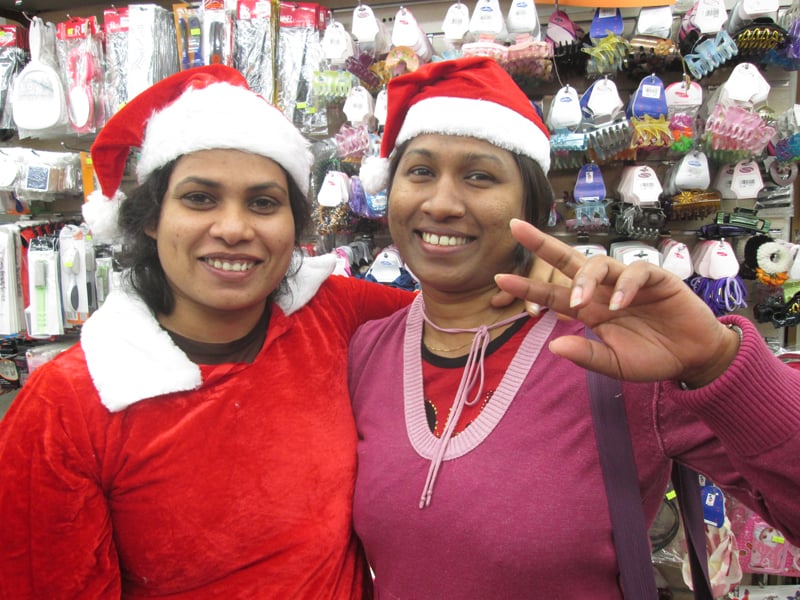 On the fourth floor, where Asian food stores and African hair weavers mostly cater to migrants and refugees, they bought Santa hats and Christmas lights.

The gritty, cavernous bus station, in a run-down neighborhood in south Tel Aviv, is the best-known place in this overwhelming Jewish city to purchase Christmas trees and Santa suits.

"You have to work harder to create a Christmas atmosphere,” said Perez, a Filipino citizen who works as a caregiver in Israel. “The joy comes from our church and community and our faith. It’s more spiritual, less materialistic.”

While Christians around the globe decorate their homes for Christmas, doing so takes on added significance in Israel, where public Christmas displays are generally seen in just a handful of municipalities such as Nazareth and Haifa with sizable Christian populations. Here, winter breaks and lighting festivals revolve around a Hanukkah menorah, not a Christmas tree.

But as the population of Christian foreign workers and asylum seekers has grown in Israel, so, too, has the demand for Christmas-related merchandise. Israel’s 158,000 Christian citizens, the majority of them residents of Arab communities, make up 2 percent of the population.

But there are at least 100,000 more Christians living in Israel, according to the Rev. David Neuhaus, patriarchal vicar for Israel’s Hebrew-speaking Catholic community.

“And then there’s the huge population -- it could be as high as 90,000 -- who came as tourists or pilgrims, often from Latin America or northern European countries, who never left,” the priest said.

To meet their spiritual and day-to-day needs, dozens of churches have sprung up around Tel Aviv and other parts of the country, Neuhaus said.

The Catholic Church has established a pastoral center and places of worship in Tel Aviv. It also offers religious education to hundreds of migrant children who attend Jewish schools.

Despite being in the Holy Land, migrants and asylum seekers can find Christmas here an especially challenging time.

“They’re not at home with their families,” Neuhaus said. “They work long hours and have very little time to celebrate Christmas. The places where they could go to celebrate,” such as Bethlehem and Nazareth, “may be far from where they live. At home everything would be centered around Christmas.”

Selling everything from Christmas trees to inflatable Santas in an alcove of the bus station, Alexander Rothberg, a Russian Jew, noted that many of his customers are secular Jewish and non-Jewish emigrants from the former Soviet Union.

But Alexander Kuf, a Christian who emigrated from the former Soviet Union with his Jewish wife, said some of his sales have been to Israelis who didn't grow up with Christmas but, thanks to the availability of foreign TV shows and movies, and the influence of social media, "think the decorations are pretty."

Trying on a red velvet dress with white trim in another bus station store, Shama Senanyakgi, a caregiver from Sri Lanka, said she and her friends accompanying her on a search for holiday decorations and gifts “are glad to be in Israel."

“It’s more pleasant here,” she said of her close-knit foreign-worker community. “Everyone comes into Tel Aviv and we go to our church. We sing in a choir, we put on shows and give gifts. We’ve been decorating since the end of November.”

Senanyakgi, who has lived in Israel for the past five years, said she will pray for many things this Christmas, and “especially that this country will experience peace.”