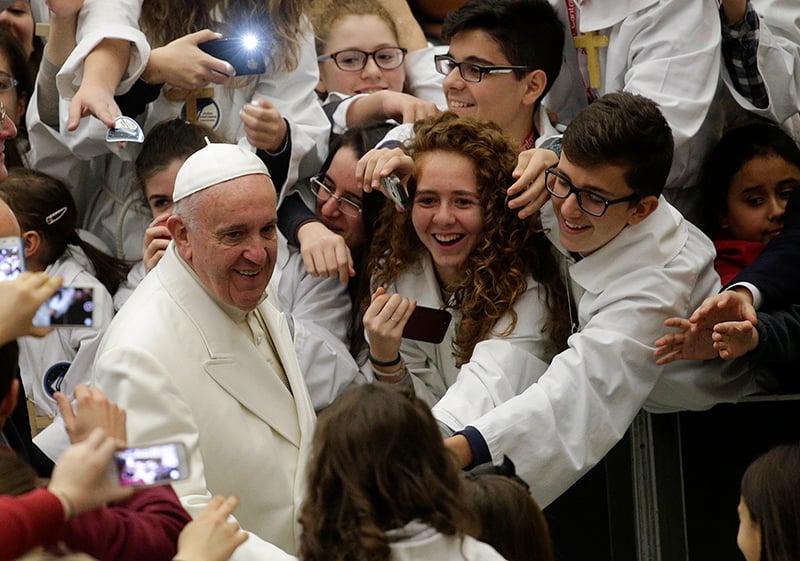 Pope Francis arrives to lead a special audience for "Pueri Cantores" in Paul VI Hall at the Vatican on December 31, 2015. Photo courtesy of REUTERS/Max Rossi

VATICAN CITY (RNS) Pope Francis told young choristers he sings “like a donkey” and once wanted to be a butcher.

The pope took the unusual opportunity to answer the choristers’ questions Thursday (Dec. 31) during the annual meeting of the Pueri Cantores, an international Catholic choral organization.

The give-and-take included insights from Francis about growing up in Argentina and his thoughts on media and anger.

Here are some of the pope’s responses:

READ: Singing, cooking and shooting -- nuns made news in 2015

Francis acquired a love of music as a child, while listening to opera on the radio. But despite believing that singing is good for the soul, he said he has no such talents:

“I like hearing singing, but, if I sang, I’d sound like a donkey, because I don’t know how to sing. I don’t even know how to speak well, because I have a defect in the way I speak, in the phonetics.”

When he was a child the pontiff dreamed of being a butcher:

“Why? Because there were butchers in the market -- there were three or four places for meat -- taking the knife, cutting the pieces. ... It’s an art, and I liked to see it, to watch it.”

The pontiff admitted he gets angry when people do something wrong.

He described anger as “poisonous” and seemed particularly aggrieved with those who have a “bitter soul”: “It seems that every morning they clean their teeth with vinegar to be so angry! People like this ... it’s a sickness.”

Although Francis doesn’t log online, he likes to read the papers and claimed to know a thing or two about the workings of global media:

“There are so many good things in the world, and I ask myself: Why are these good things not published? Because it seems that people prefer to see mean things or hear bad news. … If you want to have (a high) rating -- journalist, television or whatever you want -- show only bad things; people get bored of good things.”