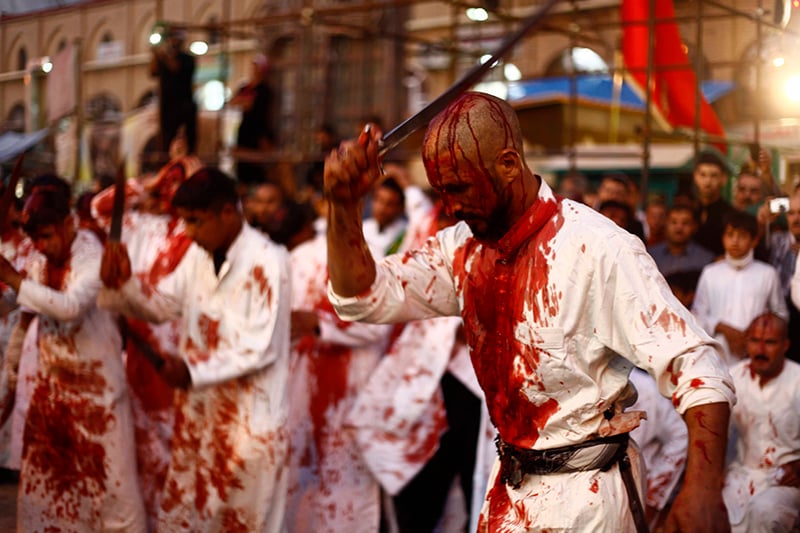 Iraq Shi'ite Muslim men bleed as they gash their foreheads with swords and beat themselves during the religious festival of Ashura in Najaf, 160km (100 miles) south of Baghdad on November 13, 2013. During Ashura, Shi'ite Muslims commemorate the slaying of Prophet Muhammad's grandson Hussein in Kerbala in 680 AD. The most important day in the Shi'ite calendar, Ashura has become a show of strength in Iraq for a majority whose public worship was repressed by former dictator Saddam Hussein. Photo courtesy of REUTERS/Alaa Al-Marjani
January 4, 2016
Kimberly Winston

Iraq Shiite Muslim men bleed as they gash their foreheads with swords and beat themselves during the religious festival of Ashoura in Najaf, 160km (100 miles) south of Baghdad, on Nov. 13, 2013. During Ashoura, Shiite Muslims commemorate the slaying of Prophet Muhammad's grandson Hussein in Karbala in 680 A.D. The most important day in the Shiite calendar, Ashoura has become a show of strength in Iraq for a majority whose public worship was repressed by former dictator Saddam Hussein. Photo courtesy of REUTERS/Alaa Al-Marjani *Editors: This photo may only be republished with RNS-SUNISHIITE-SPLAINER, originally transmitted on February 18, 2015.

The ‘Splainer (as in, “You’ve got some ‘splaining to do”) is an occasional feature in which RNS gives you everything you need to know about current events to help you hold your own at the water cooler.

(RNS) The execution of a senior Shiite cleric in Sunni-ruled Saudi Arabia has exacerbated Sunni-Shiite tensions. Two main sects of Islam have been in conflict for more than a millennium. Why does such an ancient division continue to influence politics, foreign policy and even wars today?

Here's what you need to know:

A: Both are sects of Islam and the adherents of both are Muslims, all bound by the same Quran, the same Five Pillars of Islam -- belief in one God, daily prayer, fasting, charity and hajj, or pilgrimage. Both revere the Prophet Muhammad, who founded Islam in 620.

A very rough -- and admittedly imperfect -- analogy is the Protestant/Catholic/Orthodox divide within Christianity. All three groups are Christian, but they have diverging views on leadership, theology, worship rites and even sacred shrines. Some Catholics and Protestants view the other as apostates, but the bloody conflicts between the two camps are mostly consigned to history.

Q: What is at the root of their conflict?

A: Basically, Sunnis and Shiites differ on who should have succeeded Muhammad after his death in 632. Sunnis supported Abu Bakr, the prophet’s friend; Shiite Muslims felt the rightful successor was the prophet’s son-in-law and cousin, Ali ibn Abi Talib. Ali became the fourth caliph, or spiritual leader of Muslims, but he was murdered and his son was killed in battle, effectively ending the direct line from Muhammad. Today's Shiites consider all caliphs after Ali to be false. Sunnis, meanwhile, believe Muslim leaders can be elected, or picked, from qualified teachers. So Sunni and Shiite Muslims do not recognize the same line of authority.

That's why the declaration by the Islamic State group, also known as ISIS or ISIL, last summer that it was establishing a "new caliphate" through its leader Abu Bakr al-Baghdadi caused such a global stir. The Islamic State is a Sunni group and its stated goals are to create a territory run by a caliph and Shariah, or Islamic law. In a video announcing the caliphate last June, the group described al-Baghdadi as “descendant from the family of the Prophet, the slave of God” -- perhaps an attempt to legitimate him in the eyes of Shiites. If they -- or any other Muslims -- fail to recognize the new caliphate, they will be considered apostates and can be killed under Shariah.

Q: Where do Sunnis and Shiites live?

A: In lots of hotbed places. Syria is a majority-Sunni country, but the regime of President Bashar Assad is a close ally of Shiite-dominated Iran (Assad's Alawite sect is a whole other story). Iraq is majority Shiite, but northern Iraq has a lot of Sunnis and the Islamic State group has made increasing inroads into the country. Neighboring Iran is majority Shiite, while next-door Saudi Arabia is majority Sunni. Yemen, Afghanistan, Pakistan and Lebanon have significant Shiite minorities. Sunnis make up about 85 percent of the world’s Muslims (including the vast majority of U.S. Muslims). See the problem? 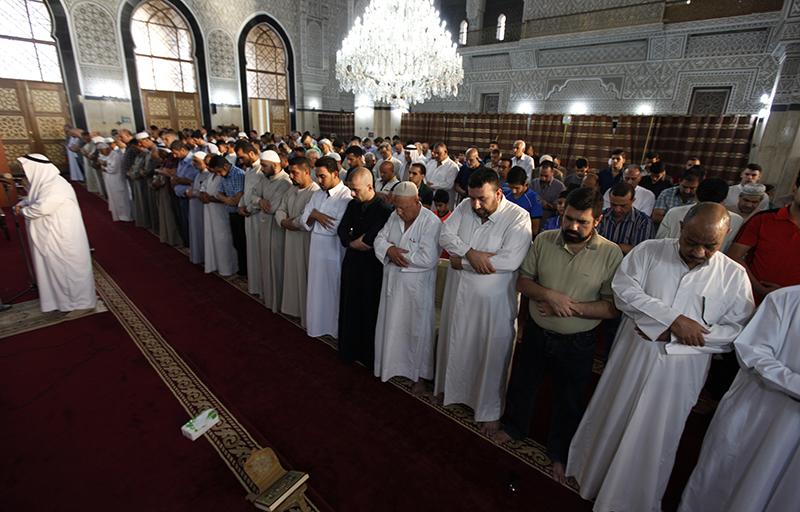 Sunni worshippers attend prayers at a Sunni mosque during Eid al-Fitr in Baghdad July 28, 2014. Photo courtesy of REUTERS/Ahmed Saad *Editors: This photo may only be republished with RNS-SUNISHIITE-SPLAINER, originally transmitted on February 18, 2015.

Q: So, if all this happened 1,400 years ago, what are they fighting about now?

A: It's a complicated question that can’t be reduced to a few sentences, but here goes:

Where once the conflict between Sunni and Shiite was religious, now it is more political. In Iraq, the Shiite-dominated army has been seen as a strong-arm of former Shiite Prime Minister Nouri al-Maliki and an oppressive force by majority Sunnis in the north. That's why many were happy to have the Sunni-dominated Islamic State group make gains across the north. And as the Islamic State group grows in strength and numbers -- experts say would-be jihadis have flocked to its forces in northern Syria since the declaration of the caliphate -- the Sunni-Shiite conflict will intensify and spread.

Q: OK, but all this is taking place on the other side of the world. Why should I care?

A: Because Islam is a global religion, and America has significant strategic and military interests in the region. The number of Muslims is expected to rise by 35 percent in the next 20 years, according to the Pew Research Center, to reach 2.2 billion people.