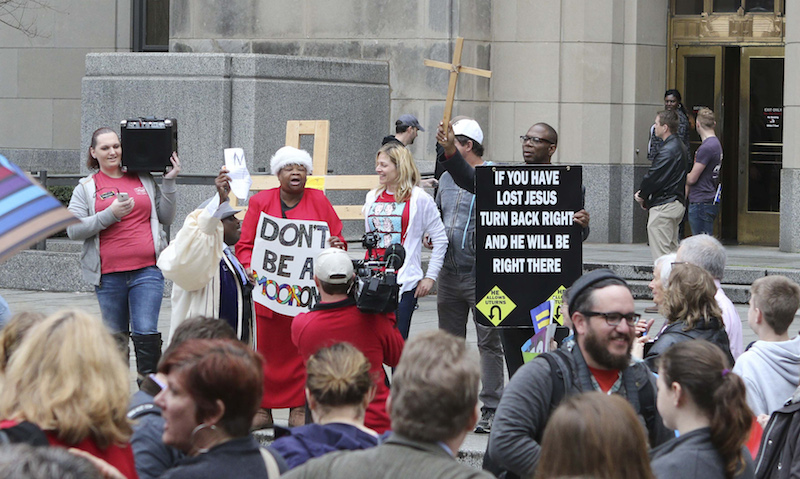 (RNS) Alabama’s probate courts may not issue marriage licenses to same-sex couples, the chief justice of the Alabama Supreme Court has ordered.

Chief Justice Roy Moore ruled Wednesday (Jan. 6) that Alabama’s Marriage Protection Act, which bars such unions, remains “in full force and effect” despite a June ruling by the U.S. Supreme Court that struck down similar laws banning same-sex marriage in Kentucky, Michigan, Ohio and Tennessee, according to USA Today.

This is not Moore’s first attempt to blur church-state boundaries. He was Alabama’s chief justice in 2003, when a state judicial panel removed him because he refused to obey a federal judge’s order to remove a 5,200-pound granite Ten Commandments monument from the lobby of the Alabama Judicial Building. But he was re-elected to the post in 2012.

In the same-sex marriage showdown, Moore does not have the authority to override higher courts, Scott McCoy, a senior staff attorney for the Southern Poverty Law Center, told Reuters news service.

But Christian supporters were vocal about supporting the chief justice:

Breaking News: In Alabama, Roy Moore continues to stand up for traditional marriage and the rule of law in that… https://t.co/Jms8h5mVcU — Pastoredsmith (@pastoredsmith) January 6, 2016

Religion Hub
As Texas ban on abortion goes into effect, a religion scholar explains that pre-modern Christian attitudes on marriage and reproductive rights were quite different
Follow us on Facebook!
Submit your photos to RNS