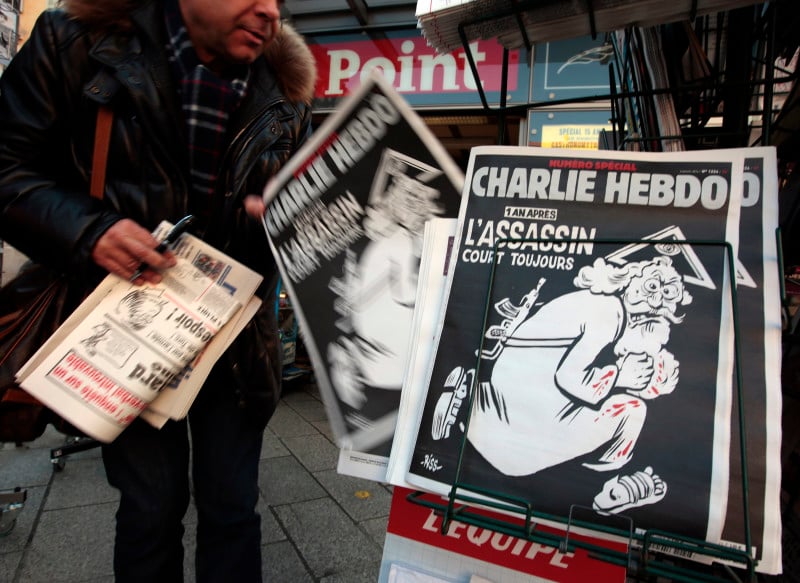 A man takes a copy of the latest edition of the French weekly Charlie Hebdo with the title “One year on, The assassin still on the run” displayed at a kiosk in Nice, France, on Jan. 6, 2016. France this week commemorates the victims of last year’s Islamist militant attacks on the satirical publication and a Jewish supermarket with eulogies, memorial plaques and another cartoon lampooning religion. Photo by Eric Gaillard, courtesy of Reuters *Editors: This photo may only be republished with RNS-VATICAN-HEBDO, originally transmitted on Jan. 6, 2015.

The controversial cover commemorates a year since the terrorist attack against Charlie Hebdo’s Paris headquarters, which left 12 people dead and led to a global debate on religious extremism and freedom of speech.

“One year later, the assassin is still on the run,” reads the black and white front page, with a cartoon depicting a violent God.

READ: Pope Francis on free speech: ‘You cannot insult the faith of others’

“The French weekly once again forgets what religious leaders of every affinity have been repeating for some time, to reject violence in the name of religion,” it said, describing the move as blasphemous.

“The choice of Charlie Hebdo shows the sad paradox of a world increasingly more careful of being ‘politically correct,’ to the point of being almost ridiculous … But that doesn’t want to recognize and respect the faith in God of every believer, whichever religion they practice,” L’Osservatore Romano added.

The latest issue of Charlie Hebdo stands in stark contrast to the edition published in the aftermath of the attack, featuring a crying Muhammad under a headline reading “All is forgiven.”

Two gunmen stormed the magazine’s offices on Jan. 7, 2015, shooting staff in an attack that was later claimed by Yemen’s al-Qaida branch.

After that attack, Pope Francis said freedom of expression was a “fundamental human right” and stressed that killing in the name of God was an unacceptable “aberration.”

But he also took issue with Charlie Hebdo’s anti-religious stance.

“You can’t provoke, you can’t insult the faith of others, you can’t make fun of faith,” he told reporters during an Asian tour.

The Vatican later issued a statement that said the pope’s comments were not intended as a justification for the attacks.