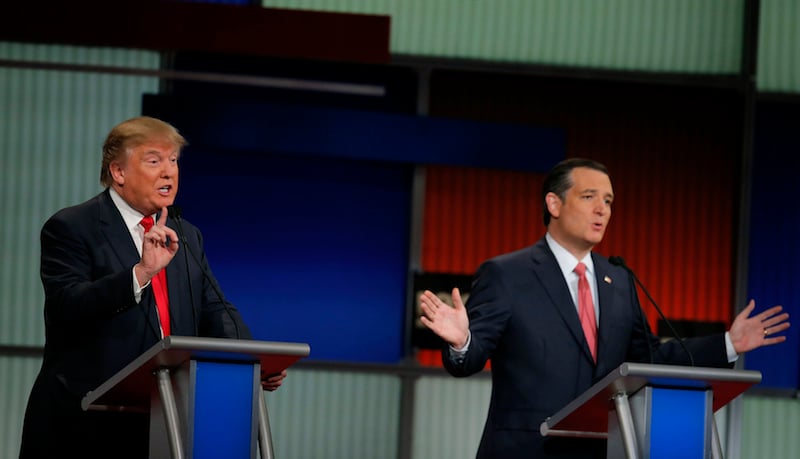 (RNS) I’m Jewish. And while it’s true I wasn’t born in New York City to native New York parents, which according to English common law precludes my being considered a natural-born New Yorker, I grew up in Montclair, N.J., from which my father commuted into the City every day to work, eventually at The New York Times.

I know from New York values.

So Ted Cruz goes on Massachusetts radio and says that Donald Trump “embodies” them. And at Thursday’s (Jan. 14) Republican presidential debate, he doubles down and says “everyone understands that the values in New York City are socially liberal or pro-abortion or pro-gay marriage, focus around money and the media.”

Trump wins the hand by playing the 9/11 card: “When the World Trade Center came down, I saw something that no place on Earth could have handled more beautifully, more humanely than New York.”

All Cruz can do is lamely clap.

“New York” certainly can serve as code for “Jew” throughout what The New Yorker‘s Saul Steinberg (yes, a Jew) famously portrayed as the American Outback — in national politics no less than in other venues.

To Jesse Jackson, the city was ipso facto a Jewish place called Hymietown. As he confided to The Washington Post‘s Milton Coleman when he was running for president in 1984, “That’s all Hymie wants to talk about, is Israel; every time you go to Hymietown, that’s all they want to talk about.” When Coleman reported the remark, all hell broke loose.

Or take the iconic TV show “West Wing,” which in its inaugural episode had an irate Christian conservative say to Deputy Chief of Staff Josh Lyman, “It was only a matter of time with you, Josh. That New York sense of humor was just a little ….”

“She meant Jewish,” Communications Director Toby Ziegler says to Lyman. “When she said New York sense of humor, she was talking about you and me.”

Now I don’t think Cruz was referring to Trump as having a Jewish sense of humor, though I must confess that when I hear his voice I sometimes think I’m listening to Billy Crystal.

No, the key term in his debate explanation is “money.” You’ll find plenty of social liberalism in, say, Cambridge, Mass., where I was born and went to college and, like Cruz, earned my professional degree. Cambridge is not notably Jewish. But that “focus around money and the media”? That was “New York = Jews” all the way. Don’t kid yourself.