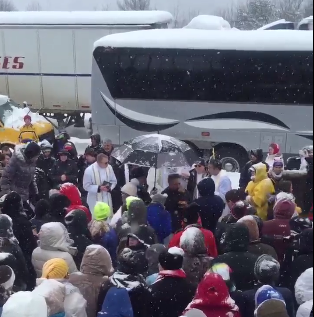 Catholic activists homeward bound from the anti-abortion March for Life in Washington were trapped on an interstate by the weekend blizzard. They built an altar from snow and conducted Catholic Mass. Video posted on Twitter by Abbie Rehurek.

Anticipating the massive weekend storm, reporters at Philadelphia Magazine asked the archdiocese, on behalf of the city’s many concerned Catholics: “What will become of my soul if I skip church on Sunday due to the massive amount of snow — snow that God himself hath sent?”

Attend if possible, the faithful were told, but keep safety in mind.

And if attendance isn’t possible, watch the Mass on TV.

No TV? Read the Word of God, especially the biblical readings for Sunday, which can be found online.

Pray the Holy Rosary, and/or make use of other devotional prayers.

The Bishop of Arlington, Va., just south of Washington, alerted parishioners ahead of the storm that Catholics in the diocese weren’t obligated to attend Mass and by Saturday, when some people might have headed for weekend Mass, snow drifts made it nearly impossible to drive.

Indeed, the storm cut into attendance for the annual anti-abortion “March for Life” in Washington and complicated the return home for those activists who did make it to the Supreme Court steps.

One convoy of buses shepherding hundreds of marchers, priests and chaperones was trapped for hours on an interstate as snow brought traffic to a complete halt.

According to multiple reports on social media, the Midwest Catholics spent their time aiding other drivers, singing, and ultimately, holding Mass on an altar they built from snow.

Catholics weren’t alone in using caution. Riverside Baptist Church in Washington D.C., posted a snowfall video on its website with this message in bold red type: “SUNDAY SERVICES CANCELED. Stay safe, read or listen to a sermon under the sermon tab, pray and return to us Sunday, January 31st. The Lord bless and keep you.”

Still, this weekend may not set a low-attendance record. Blizzard or no blizzard, millions of self-identified Christians — Catholic or Protestant — don’t attend weekend worship services more than once a month, anyway.

“There’s an aspirational quality here,” Robert Jones, CEO of PRRI pointed out. “People see themselves as the kind of person who would go.”