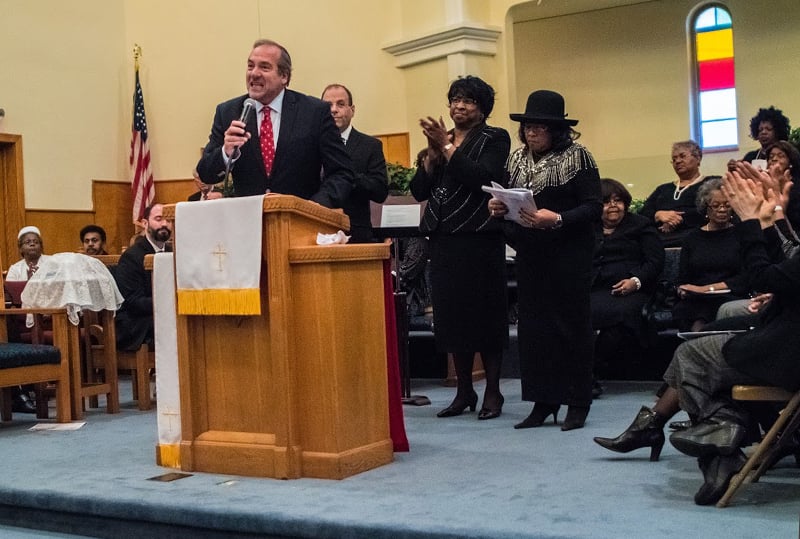 (RNS) The rabbi who has for decades painstakingly and successfully nurtured evangelicals’ love for Israel now extends his hand to African-American churches.

And many are responding with as much enthusiasm as the white heartland congregations into which Yechiel Eckstein first ventured more than 35 years ago.

“I felt the need to reach out again, to the African-American Christian community,” said Eckstein, founder of the International Fellowship of Christians and Jews, which collects more than $125 million annually for social welfare projects in Israel, mostly from Christian donors. “The potential of beginning dialogues and fostering cooperation between blacks and Jews in America is great.”

Eckstein aims for a partnership with historic resonance, one that recalls the support many American Jews gave to blacks during the civil rights era. “At the same time you had people like Dr. Martin Luther King Jr., who was very, very supportive of Israel,” says Eckstein, an American who now lives in Israel.

The Orthodox rabbi, who has taken thousands of Christians and their pastors to the Jewish state, in August hosted his first trip organized exclusively for clergy from a traditionally black denomination, with about 20 ministers from the Church of God in Christ.

The relationship is not only about travel.

On the Sunday before Martin Luther King Jr. Day in Detroit, Eckstein joined the pastor of the historic Russell Street Missionary Baptist Church as the congregation celebrated the day with a local synagogue and gave its entire collection plate to refurbish a bomb shelter in Israel.

Eckstein has found Russell Street’s pastor, the Rev. DeeDee M. Coleman, an exceptionally willing partner in his new outreach program, which he also plans to extend to Latino churches.

Coleman traveled on the summer trip with Eckstein to Israel and saw communities with not enough bomb shelters to protect them from rocket fire. Some of the existing ones were dilapidated.

“I knew that this was what I needed to do,” Coleman recalls of her visit to one shelter with broken vents. “If my church could repair one bomb shelter it could mean life or death for a Jewish family, or a Jewish person, and it just touched my heart.”

On the MLK Sunday when Adat Shalom Synagogue members came to Russell Street and sang “We Shall Overcome” with the church choir — as well as the Israeli national anthem — the collection for the bomb shelter topped $6,700.

Both Eckstein and Coleman — who sits on the national council of the American Israel Public Affairs Committee, the pro-Israel lobby — have taken flak for their work.

American Jews — more liberal as a group than most Americans — have criticized Eckstein for forging ties with evangelical Christians with whom they may share few values besides their support for Israel. Others question the motivations of the evangelicals, some of whom believe in a fiery eschatological end for Jews who don’t convert to Christianity. Still others resent that Eckstein solicits money from Christians who may have little to spare for their own communities.

Eckstein is “selling the dignity of the Jewish people,” Abraham Foxman, the Jewish civil rights leader, once said.

But Coleman views her church’s donations to Israel in religious terms.

“Russell Street is a missionary Baptist church. We are a global church. And if we can build a well for the lives of individuals in Africa, then surely we can build a bomb shelter for the safety and security of the Jewish people in Israel,” she said. “According to what my church believes, and what I have taught them, Israel is the holy land of God, the people of God, and we are to honor them.”

And as Eckstein had hoped, African-American pastors are also thinking of their alliance with the Fellowship in reference to a previous generation’s partnership with Jews.

“I’m looking at it from the historical perspective, that Jews were supportive of African-Americans during the civil rights movement,” said the Rev. James C. Perkins of Detroit’s Greater Christ Baptist Church, who is traveling on this week’s Fellowship trip to to Israel. He said he was touched to see that one of the first events on the tour is a service in honor of the memory of the Rev. Martin Luther King Jr.

Rabbi Aaron Bergman, who brought his progressively minded congregation to Russell Street Missionary Baptist earlier this month, similarly harks back to the struggle for black equality. 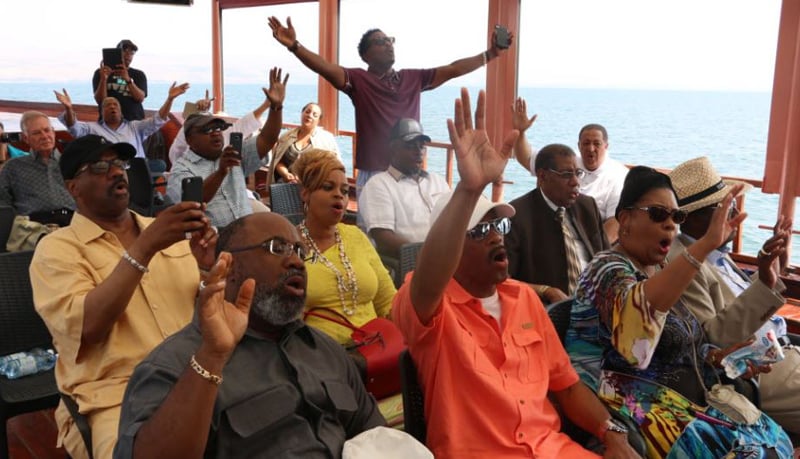 Members of the Church of God in Christ denomination pray during a boat ride on Israel’s Sea of Galilee with the International Fellowship of Christians and Jews last summer. Photo courtesy of Phil Lewis/The Fellowship

“I’m really happy that black churches and synagogues are reconnecting in a better way,” he said. Though impressed by the joint Martin Luther King Jr. Day service, and the money raised for the bomb shelter, he wants the partnership between Adat Shalom and Russell Street Missionary Baptist to deepen — especially, he says, given the nation’s recent awakening to the unfinished business of the civil rights era of 50 years ago.

But some African-Americans, including members of the Black Lives Matter movement who have aligned with “Free Palestine” activists, may look skeptically upon Eckstein’s work. The rabbi does not focus on Muslims or the conflict between Palestinians and Israelis. Neither does Eckstein’s Chicago and Jerusalem-based Fellowship expend energy on predominantly white mainline Protestant denominations. Several, including the Presbyterians (PCUSA), have in recent years passed resolutions critical of the Israeli occupation and have withdrawn church investments from companies that they say support it.

“We don’t get involved with issues like (West Bank) settlements, or in issues like abortion or school prayer or homosexuality,” said Eckstein. “The hot issues that can divide: That’s not our calling, that’s not what we do.”

What the Fellowship does pay for, among other projects: soup kitchens, clothing and medical care for poor Israelis and Jews in the former Soviet Union, and assistance for Jews around the world to migrate to Israel. In this way, Eckstein says, the Fellowship connects Christians with their Jewish roots — the faith from which theirs sprang.

“The key verse for Christians is Genesis Chapter 12:3,” Eckstein says. “God promises Abraham: ‘I will bless those who bless you and curse those who curse you.'”