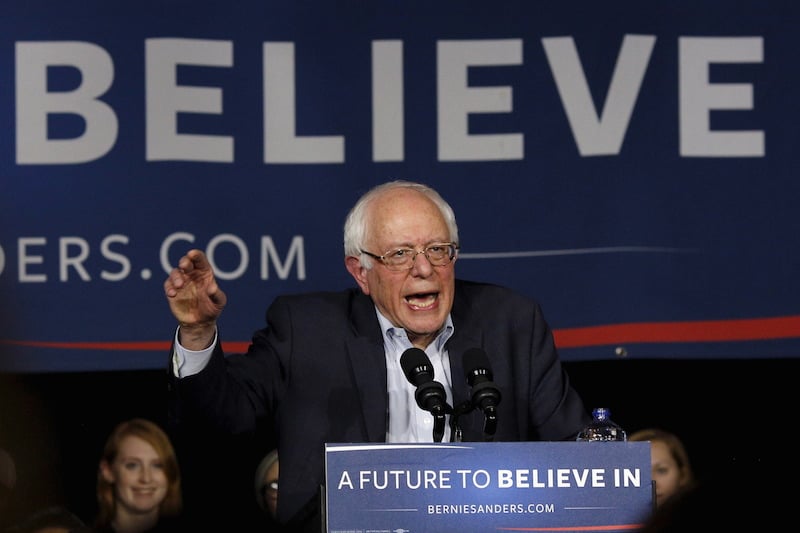 (RNS) Vermont Sen. Bernie Sanders — a political independent, a socialist and possibly the most liberal member of Congress — may be a cultural Jew, but he’s campaigned on the idea that people of faith and those with strong moral values can stand together.

He took his pitch — that the separation of church and state honors diversity and respects autonomy — to conservative evangelicals at Jerry Falwell-founded Liberty University. He prayed with faith leaders in South Carolina.

And every speech he gives embodies his near-religious fervor for a “revolution” that returns political and economic power to working-class people.

The presidential candidate, 74, was born to Jewish parents and identifies as culturally Jewish. Although by Jewish law he is Jewish, he has freely acknowledged that he is not a religious person.

Sanders has three grown stepchildren with his wife, Jane O’Meara Sanders, the former president of Vermont’s Burlington College, as well as a grown son, Levi, born prior to his current marriage. Raised Catholic, O’Meara Sanders said in a 1996 interview with the Burlington Free Press that she still practices Catholicism “in my own way.”

As far as religious influences go, Sanders said he finds himself “very close to the teachings of Pope Francis,” and he described the pope as “incredibly smart and brave,” according to USA Today.

2. He grew up in a world of liberal Jewish activism.

Brooklyn-raised Sanders was born to a Polish immigrant father, whose family was mostly wiped out during the Holocaust, and a mother who was the daughter of Polish immigrants, according to a 2007 New York Times profile.

Sanders’ version of socialism is rooted in 20th-century Jewish American leftist politics, which organized for better working conditions and wages, equality for women and civil rights for African-Americans, among other causes.

Sanders has called for free higher education for all Americans, publicly funded elections and a $1 trillion program to restore the nation’s bridges and roads.

Sanders has strong appeal with millennials, about a third of whom say they have no religious identity.

Conversely, he may have no appeal with evangelicals and other conservative Christians. He scored a solid zero from Ralph Reed’s Faith and Freedom Coalition in its most recent scorecard and a 100 from the abortion rights group NARAL Pro-Choice America.

But he was treated with applause by the conservative audience at Liberty University — tens of thousands in person and online — when he said  Americans should stand with the poor. He quoted from the Bible (Matthew 7:12 and Amos 5:24) and told students, “I am motivated by a vision which exists in all of the great religions — in Christianity, in Judaism, in Islam, Buddhism and other religions — and which is so beautifully and clearly stated in Matthew 7:12.

“It is not very complicated,” he added.

4. He spent time in the Holy Land.

After he graduated from the University of Chicago in 1964, Sanders spent several months in Israel on a kibbutz, an agricultural collective and one of the Jewish state’s experiments with socialism.

He has voiced criticism of the Jewish state and boycotted Israeli Prime Minister Benjamin Netanyahu’s speech to Congress in fall 2015. But Sanders also has stood up to constituents who vilify Israel and who defend Hamas, the U.S.-designated terrorist group that calls for the destruction of Israel.

Although he won a handful of states on Super Tuesday, Sanders remains hundreds of delegates behind Hillary Clinton.

But while he battles her on social and economic policies, her faith — like that of the Catholic and evangelical Republican contenders — is not subject to attacks from Sanders.

He prefers to keep the conversation on common ground, with one exception — God.

Asked by Jimmy Kimmel whether he believed in God, Sanders glided past the question to remind listeners: “What I believe in and what my spirituality is about, is that we’re all in this together. That I think it is not a good thing to believe that as human beings we can turn our backs on the suffering of other people.”

It’s not a matter of Judaism or Christianity, it’s the idea, Sanders told Kimmel, paraphrasing Pope Francis, that “we cannot worship just billionaires and the making of more and more money. Life is more than that.”

But as Sanders soldiers on in the campaign, some Jewish critics are offended that he rebuffs his cultural and religious heritage. Even so, “I think it is very much a statement about America that someone who everybody knows is of Jewish background and has a Jewish name and sounds Jewish from Brooklyn can get several delegates,” Jonathan Sarna, an expert in American Jewish history at Brandeis University, told The Associated Press. “There is a sense that only in America could a Bernie Sanders be a candidate.”

(Lauren Markoe is a national reporter for RNS; Cathy Lynn Grossman contributed to this report) Martini Judaism
President Trump is a religious leader
Follow us on Facebook!
Submit your photos to RNS