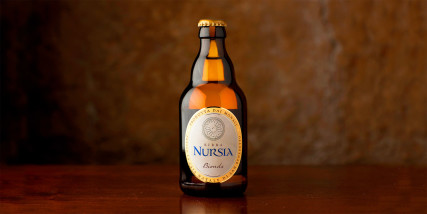 Image via the Monks of Nursia beer-selling site

(RNS) The Benedictine monks of Norcia in Italy, the birthplace of St. Benedict, founder of the Western monastic tradition, have been celebrated for reviving the monastery and topping Billboard’s classical chart with their traditional Gregorian chant CDs.

Now, just in time for Lent, fans in the U.S. can for the first time buy their home-brewed beer as easily as they can download their music.

And it seems we can thank the Rev. Richard Cipolla, a Connecticut priest and blogger at the Traditionalist site Rorate Caeli, for this development (as it were) and for this news, which he said came just a few days ago from the head of the monastery north of Rome:

“I had urged them to expand their market to the United States, both to make their excellent beer more available and well known, but also to let themselves to be more well known in the United States as a center of monastic renewal based on the Traditional Liturgy of the Church,” Cipolla writes.

“I wanted to share this good news with you all who love the Tradition and who like beer made in the traditional way … Since their beer is as good as their chant (I can attest to this), we can already thank God for their success in this venture.”

Yes, monks in the U.S. have been noteworthy as craft brewers (and casket-makers, among other things). But c’mon, beer from the birthplace of St. Benedict (and don’t forget his twin sister, St. Scholastica)!

The only question is whether it will travel well. I think I’ll leave that judgment to Fr. Cipolla, and also the truly qualified Rod Dreher at the American Conservative — blogger, bon vivant, and Benedict Option-ist — who has been to the source, and declared it a font of evangelization:

“I asked Fr. Martin how brewing beer serves the Church,” Dreher wrote in an October 2014 post. “He said that you’d be surprised by how many people who aren’t especially interested in Christianity taste the beer and find that it really tastes good. Then they want to know more about how it’s made, and sooner or later, some of them want to know about the faith. Besides, he said, drinking beer makes the heart glad.”

Hence, the motto of the monastery at Nursia (its Latin name, common in English): “Ut Laetificet Cor,” or “That the heart might be gladdened.”

For details, visit the monastery’s beer website, and read more on its products from this press release. Hurry, there will be a limited quantity available each month, and the reason they are doing this is because demand is so high.They have a Brewmonks’ Club for regulars, and read about their first U.S. customer here. He seems quite satisfied.

The beer comes in wine-sized bottles sold separately, in 6-packs and in cases of 12. They have two types, a blonde ale and a Belgian style strong dark ale.

Oh, and yes, beer (like pretzels) was viewed by monks in the past as a legit beverage to sustain them during the Lenten fast. So there.

Let me know what you think. A visual taste below:

News
Study: Biden still leads among Latino Christian voters, but Trump’s support has grown
News
In Oregon, churches and anti-fascists unite to provide mutual aid to fire evacuees and others in need
Opinion
What good is faith when your fertility treatments aren’t working?
News
Campaign brewing to get Hindu god Brahma off popular beer
News
Who is Junipero Serra and why are California protesters toppling statues of this saint?
© Copyright 2020, Religion News Service. All rights reserved. Use of and/or registration on any portion of this site constitutes acceptance of our User Agreement and Privacy Policy, Privacy Statement and Cookie Notice. The material on this site may not be reproduced, distributed, transmitted, cached or otherwise used, except with the prior written permission of Religion News Service.