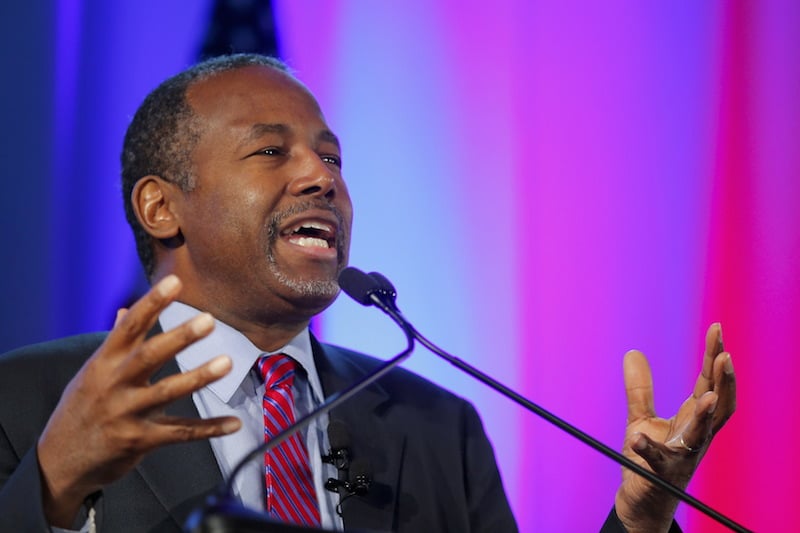 UPDATE: Ben Carson withdrew from the 2016 GOP race on March 4, in the wake of losses on Super Tuesday

(RNS) Ben Carson was once best-known as a neurosurgeon with a specialty for separating conjoined baby twins.

Then, he attended a National Prayer Breakfast and blasted President Obama while standing just a few feet away from him. Suddenly, Carson was a hero among conservative Christians who urged him to run for the Republican nomination for U.S. president. But, by the Super Tuesday vote, he had clearly been deserted by evangelicals for more strident rivals than the soft-spoken physician.

Carson: “As long we continue to receive…support, and the Lord keeps opening doors, I will remain in this presidential race.”

In his book “Gifted Hands,” Carson, 64, describes being baptized as a boy by the pastor of Detroit’s Burns Seventh-day Adventist Church. At age 12, he told the pastor of another Adventist church, in the Detroit suburb of Inkster, that he hadn’t completely grasped his first baptism and wanted to be baptized again.

Carson has served as an Adventist local elder and Sabbath school teacher. But he attends other churches. “I spend just as much time in non-Seventh-day Adventist churches because I’m not convinced that the denomination is the most important thing,” he told RNS in 1999. “I think it’s the relationship with God that’s most important.”

2. He prayed before starting any surgery.

“Even when I don’t operate, I pray because I feel that God is the ultimate source of all wisdom,” said Carson, the former director of pediatric neurosurgery at Baltimore’s Johns Hopkins Hospital, a role that gave him the status of an African-American hero.

“Quite frankly, as a neurosurgeon, there’s a lot of emphasis on technical ability, but I believe that that’s something that can be taught, but wisdom comes from God and I think that it’s something that you have to seek.”

“The PC police are out in force at all times,” he said at the 2013 National Prayer Breakfast. “People are afraid to say ‘Merry Christmas’ at Christmastime. … We’ve got to get over this sensitivity. You know it keeps people from saying what they really believe.”

4. He’d govern for all in this “Judeo-Christian nation.”

Asked in 2014 at a National Press Club appearance about how he would include non-Jews and non-Christians, he said: “The same way that we always have. Everybody’s free to do whatever they want. To try to impose one’s religious beliefs on someone else is absolutely what we should not be doing. That goes in both directions. Someone who is an atheist doesn’t have a right to tell someone who isn’t an atheist what they can or cannot do or what they can or cannot say. We have to be fair, but it has to be fair in both directions.”

Carson flashed in the headlines and social media when he told CNN’s “State of the Union” in September: “I would have problems with somebody who embraced all the doctrines associated with Islam. If they are not willing to reject Shariah and all the portions of it that are talked about in the Quran — if they are not willing to reject that, and subject that to American values and the Constitution, then of course, I would.”

He doubled down on the idea of no Muslim for president by adding that he believes some Muslim beliefs are not consistent with the Constitution: “I’m assuming that if you accept all the tenets of Islam that you would have a very difficult time abiding under the Constitution of the United States.”

By January, he had fallen in the polls behind Donald Trump, Ted Cruz and Marco Rubio as they contested for who could be loudest and toughest on immigration, ISIS and terrorism.

Carson’s slow, quiet talks with inspirational messages, such as on the value of dreaming when the going gets hard, were drowned out.

Some people “think toughness is denoted by how loud your voice is and how loudly you stamp your feet,” he said to reporters after an Iowa event days before the caucus.

(Adelle Banks is production editor and a national reporter for RNS; Cathy Lynn Grossman contributed to this report)