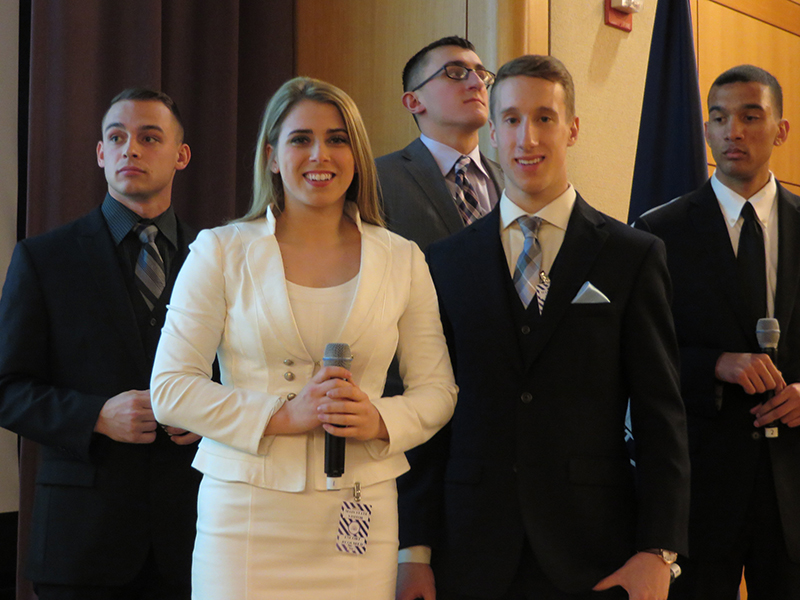 (RNS) Last fall, 16 West Point cadets -- none of them Muslim -- signed up for an elective on counterterrorism and created a Facebook page to appeal to young Muslims thinking about joining the so-called Islamic State.

The cadets aimed to persuade those tempted by the terrorist cause to see "jihad" as a struggle, but not the violent one that groups such as the Islamic State promote. For their project to succeed, the cadets knew, they would have to learn more about the faith and build a social media platform that reserved judgment even on those who expressed admiration for committed terrorists.

And there was no way they could let on that West Point cadets had engineered the page and its related Twitter feed, YouTube channel and website. "If individuals went (to) the website and knew 16 cadets from the U.S. Military Academy were behind it, I think it would lose a lot of its credibility," said Lt. Col. Bryan Price, the cadets' professor.

On Tuesday (Feb. 2), the West Point project took second place in an international contest for college students on combating terrorism online sponsored by the State Department, the Department of Homeland Security, Facebook and EdVenture Partners, a business that connects industry to colleges.

"We sought out the most creative minds at universities around the world to help us find answers," Assistant Secretary of State Evan Ryan told the contest finalists and their supporters.

The first-place winners, from Pakistan's Lahore University of Management Sciences, explained how they connected Twitter and Facebook campaigns with pop concerts and tourism ventures to convince people to speak out against the terrorism in Pakistan to which many Pakistanis have become almost numb.

They and the other 44 teams in the "Peer to Peer" competition -- from schools as diverse as New York's West Point to Saudi Arabia's King Faisal University to the University of Cincinnati -- each had $2,000 to spend on their entries. The three finalists -- from Lahore, West Point and Universita della Svizzera italiana in Lugano, Switzerland -- presented their projects in a State Department auditorium. Peer to Peer debuted last spring, with half as many entrants.

The cadets, who used most of their cash on website development, said they had wondered how their project -- designed to appeal to young people who might sympathize with terrorism -- would fare in a contest co-sponsored by Homeland Security. They used the same hashtags often deployed by the Islamic State group on Twitter -- #Syria, #IslamicState and #ParisAttacks -- to give but a few examples.

And they would anonymously insert themselves into online spaces that had little to do with terrorism, but where a lonely young person vulnerable to extremists might virtually hang out. “Our campaign uses the same strategies to compete for the same audience that the Islamic State is reaching out for,” said Cadet David Weinmann.

The project got results.

In two months it reached more than 900,000 users on Facebook in more than 25 countries. Nearly 75,000 people engaged with the page. Twitter shut down the cadets' account a few weeks ago after it received complaints -- the cadets don't know from whom.

"We took that as a compliment," said Cadet Jordan Isham, a sign the feed attracts people other than those who adamantly reject violent extremism. A phone call explaining who controlled the Twitter account and their goal quickly persuaded Twitter to restore it.

In pursuit of credibility, the students began their project by interviewing Muslim fellow cadets to deepen their knowledge of Islam. They consulted with psychologists to learn how certain colors on their website could evoke certain emotions in users -- green because of its association with Islam, and black because terrorists tend to like it. And they found the most opportune times to put new material online -- after major terrorist attacks, but also on Fridays in the Muslim world.

“We post after Friday prayer, when many people would be home and at their computers,” said Cadet C.J. Drew.

Many of their online postings are in Arabic. Two of the cadets in the class know the language -- one is an Arabic major and the other studied it before he came to West Point. And nothing on the site explicitly warns of the perils of signing up with the Islamic State or any other radical Islamist group. The message is subtle. And the cadets let the users do most of the talking.

But once on the cadets' social media platforms, users are gently pushed toward a website -- now live but still developing -- which features moderate Muslim voices talking about Islam as a religion of peace. With their $3,000 second prize, the cadets plan to continue work on the project. They asked that the media refrain from disclosing their campaign's URLs or other identifying information, for fear it would lose credibility if associated with future Army officers.

What if your social media platforms get swarmed with extremists? one of the judges asked the cadets after they presented their work.

That happens, and it's not always such a bad thing, answered Drew. It can lend authenticity to the site, and more moderate voices -- not the cadets' -- often overwhelm the extremist ones, he said.

The project took on a life of its own.

"I thought that this was going to be dead after the class ended and the final grades were submitted," said Price, the director of West Point's Combating Terrorism Center.

"Over break when most of them should have been hanging out with their families, we had cadets that were still updating stuff on the website," he said of his students, who exchanged warm handshakes with their Pakistani competitors when the winners were announced.

But can a contest really make a difference in the global battle against violent extremism?

"When it comes to new technology and uses of social media, I’m in favor of these crowd-sourcing competitions that don’t cost the government very much money and draw on the creativity and intellectual curiosity of a wide variety of people, whether it be Americans or people around the world," said Duke University Professor David Schanzer, director of the Triangle Center on Terrorism and Homeland Security. 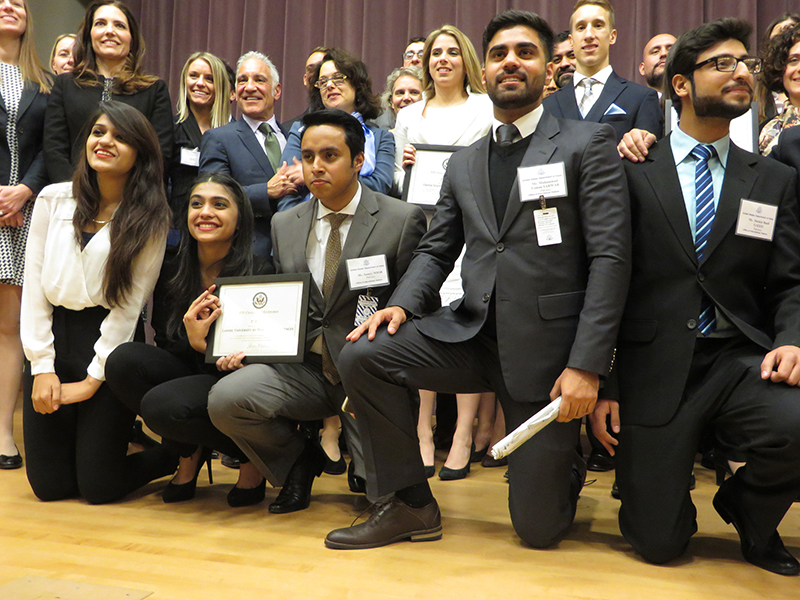 In the front row, from the Lahore University of Management Sciences in Lahore, Pakistan, are the first-prize winners of the State Department’s Peer to Peer contest for combating violent extremism. The students won their award at the finals of the international competition for college students, held at the State Department on Feb. 2, 2016. Behind them are cadets from the U.S. Military Academy (West Point), the second-place winners. In all, 45 teams from universities around the world competed. Religion News Service photo by Lauren Markoe

For the grand-prize winners, who take $5,000 back to Pakistan to further their project, terrorism is a fact of life. They introduced their project to the State Department judges by describing their homeland.

"I live in a country where academic institutions must be protected by snipers every day," one of them told the panel of judges.

(Lauren Markoe is a national reporter with RNS)

September 21, 2020
Related Posts
By Claire Giangravé
Black Jesus version of Michelangelo's Pietà divides Catholics on race and politics
By Yonat Shimron
Alabama Southern Baptist pastor resigns after speaking at party for a KKK leader
By Daniel Darling
If you've got Jesus in your profile, don't be nasty on your timeline
By Caitlin Yoshiko Kandil
'I have to find the Mecca of my heart': Muslims grieve as hajj is drastically limited
By Kathryn Post
Protester, Oluwatoyin Salau, found dead after tweeting assaulter was 'disguised as a man of God'