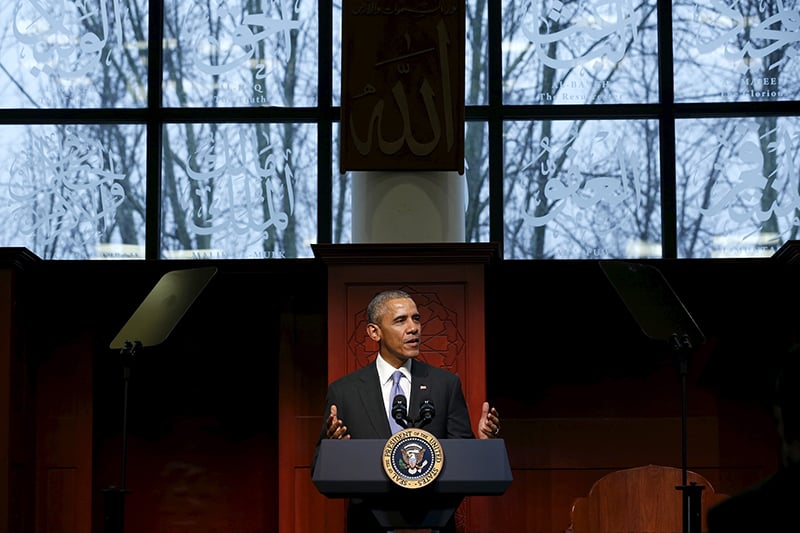 President Barack Obama delivers remarks at the Islamic Society of Baltimore mosque in Catonsville, Md., on Feb. 3, 2016. Photo courtesy of REUTERS/Jonathan Ernst
*Editors: This photo may only be republished with RNS-OBAMA-MOSQUE, originally transmitted on Feb. 3, 2016.

CATONSVILLE, Md. (RNS) In times of rising Islamophobia, President Obama made a plea for religious tolerance during his first presidential visit to an American mosque.

In keeping with local Muslim tradition, Obama removed his shoes and began by noting that many Americans have never been to a mosque.

“Think of your own synagogue or church or temple, and a mosque like this will be very familiar,” he said. “This is where families come to worship and express their love for God and each other.”

Speaking to about 500 members of the suburban Islamic Society of Baltimore on Wednesday (Feb. 3), Obama said he knows that Muslim Americans bear an outsized burden of religious bigotry in the U.S. and are called upon to condemn crimes committed by a few Muslims when the vast majority abhors violence.

Nobody asked white people to condemn the white supremacist who targeted an African-American church last spring, he said, adding: “I recognize that sometimes that doesn’t feel fair.”

But the president asked American Muslims to speak out despite prejudice against them and to proudly showcase their successes in the U.S. and the depths of their patriotism.

“This mosque, like so many in our country, is an all-American story,” Obama said, praising the hard work of the immigrants who make up many of the 3,000 who typically attend Friday prayers here.

Obama said he wanted to say two words to the Muslim Americans that they don’t hear very often: Thank you.

“Thank you for serving your community,” he said, reeling off the achievements of Muslim Americans in medicine, architecture, sports and other fields.

Obama’s predecessor also visited a mosque. George W. Bush went to the Islamic Center of Washington six days after 9/11 and made his own plea for religious tolerance.

On Wednesday, the president also spoke of the Founding Fathers’ commitment to religious tolerance — and the fact that both Thomas Jefferson and Benjamin Franklin owned Qurans.

He also spoke of Islamic extremists as a threat.

We must acknowledge, he said, that even though an overwhelming majority of Muslims are peaceful people, “a small fraction of Muslims propagate a perverted interpretation of Islam,” used to justify terror.

“It’s real, it’s there,” said Obama. “The question is: ‘How do we move forward together?’ It can’t be the work of any one faith alone.” 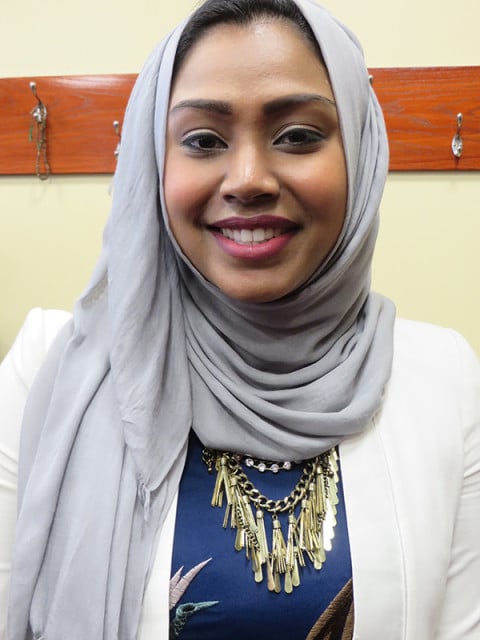 After the speech, Sarah Khan of Baltimore, who attends the mosque, said she was particularly taken with Obama’s interfaith message.

“I like how he tied all the religions together. He said it’s not just Christianity, or Judaism or Islam in the United States. It’s all of us together as a family.”

Before his speech, Obama held a private roundtable with a cross-section of the local and national Muslim community, where those attending talked about combating stereotypes of Muslim Americans. Among the participants: Yale University student Emtithal “Emi” Mahmoud, winner of the 2015 Individual World Poetry Slam Championship, and Rami Nashashibi, executive director of the Inner-City Muslim Action Network.

Before Obama’s speech, an honor guard of children bearing the U.S. flag and the Maryland state flag recited the Pledge of Allegiance. A recitation of a verse from the Quran followed, as well as words from the president of the Islamic Society of Baltimore, Muhammad Jameel.

“This community is part of the fabric of American society,” said Jameel, explaining the founding of the now expansive mosque in 1969 in a room at a local college.

Obama has received criticism from the right and the left for his visit to the mosque. Conservative critics took the White House to task for choosing a mosque where a former imam, Mohamad Adam el-Sheikh, was accused of ties to terrorist groups.

But White House spokesman Josh Earnest brushed off that criticism, calling attention to the mosque as a bulwark against extremism and an enthusiastic participant in community service projects. He also rejected criticism that Obama — who has visited mosques abroad — had waited too long to visit an American one.

(Lauren Markoe is a national reporter at Religion News Service)