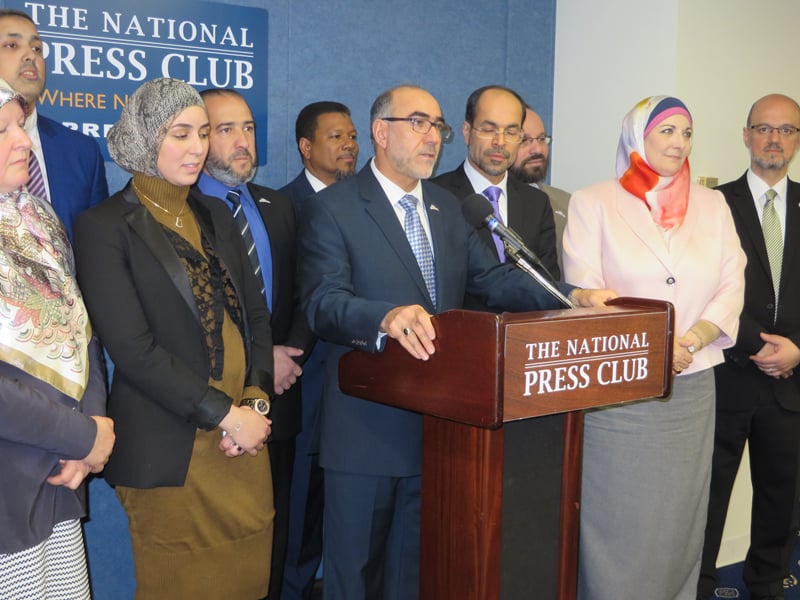 Oussama Jammal, center, at microphone, secretary general of the U.S. Council of Muslim Organizations, announces a new coalition of Muslim groups from the U.S. and other Western nations at the National Press Club in Washington, D.C. on Jan. 4, 2016. Religion News Service photo by Aysha Khan

WASHINGTON (RNS) Finding similarities in the problems they face, Muslim leaders from countries outside the Islamic world created an American-led federation to tackle Islamophobia, youth radicalization and integration in their respective societies.

The new Coordinating Body of Muslim Councils in the West, launched Thursday (Feb. 4) in Washington, is being billed as the first international organization for Muslims outside of the traditional Islamic world to strategize on these issues.

“Muslim communities in the West have been caught right in the middle of the rising tide of Islamophobia,” said Nihad Awad of the Council on American-Islamic Relations.

The initiative was agreed on at an International Conference of Muslim Councils in the West, held this week in Arlington, Va., which drew about 200 delegates from national Muslim councils in North America, Latin America, Europe, Australia, New Zealand and South Africa.

Oussama Jammal, secretary-general of the U.S. Council of Muslim Organizations, which is heading the initiative, said it will address rising Islamophobia, refugee resettlement, countering violent extremism and other concerns in the global Muslim community.

The announcement came a day after President Obama’s first visit to a mosque in Baltimore. Awad said he was “pleasantly surprised” with the president’s statement that engagement with Muslim American communities “must never be a cover for surveillance.”