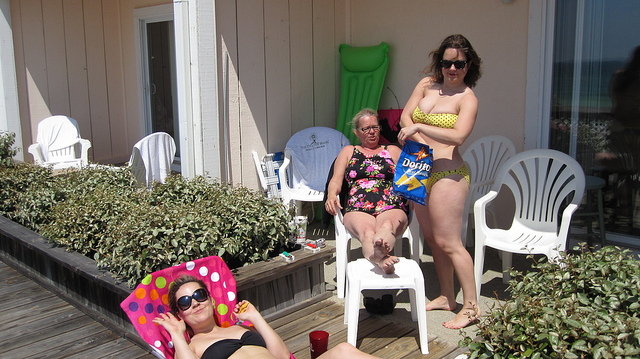 There are two kinds of people in the world: People who pay attention to Super Bowl commercials, and people who are too busily eating queso to be bothered to look up. Being one of the latter, it took me a few minutes to piece together what I had seen in a Doritos commercial that had left the rest of the group at our house with their mouths agape. There was an ultrasound, I remembered. And the bag was orange? The baby wanted chips? I couldn't think straight. I needed more queso.

Later, I went back to YouTube for a refresh. I had moved on to chocolate chip cookies at this point, but by the end of the commercial I felt like I didn't want to eat again for years. Take a look yourself:

If you can't take another second of it, here's what happens: Mom is laying down for her ultrasound, and the doofy guy she's married to brought a bag of Doritos to an ultrasound. It's not even a small personal bag, like the kind you get with a sandwich at Subway--it's a full-sized bag of Doritos. They aren't Cool Ranch, but appear to be some

We all love Cool Ranch Doritos | Photo by lolololori via Flickr (http://bit.ly/1nVKKUL)

kind of cheese-flavored chip. Cool Ranch is the only good flavor of Doritos. Doofy dad holds a chip close to his wife's stomach, baby reaches for it, dad laughs, does it again, baby wants the Doritos so badly that it literally rockets itself out of its mother's birth canal and into the room in order, presumably, to gnaw on a cheese-covered chip with its baby gums, unless it was born with teeth, which some babies are, which is terrifying.

Now, if you were me, you were thinking about the levels of approval a commercial like this has to go through. Doritos has to hire an ad agency. The ad agency has to come up with several campaigns, present them to Doritos executives (there are Doritos executives!), come up with a budget, choose a campaign for the Super Bowl, and THIS is what they all agreed on. A baby willing itself out of it's mother's womb in order to eat a Dorito.

If you weren't me, which you aren't, you might have been thinking something different. Apparently, a lot of people had thoughts about this ad. NARAL Pro-Choice America, a national organization that works to expand access to abortion, live-tweeted their responses to SuperBowl ads, including this one.

Then, the gloves were off! Conservative website The Federalist published a piece that included the sentence, "Aborting a baby who just exited the womb in order to have a Dorito chip is called infanticide, Adweek." Politico covered NARAL's tweetstorm, and the National Review argued "The trouble for NARAL and other pro-choice advocates is that technological advances like ultrasounds have become some of the most powerful arguments on the pro-life side."

A writer at Aleteia, a new female-centric Catholic website, had a saner take on the whole thing: "If anything, Doritos was commercializing the fetus, which any halfwit can see is already pretty damn human without needing any help from an ad campaign. Still, it was nice to see an ultrasound in a commercial, I guess (although the commercial itself was, frankly, gross)."

Commercials exist for one reason only--to get you and me, the queso-eating viewers of America, to give money to the people making them. Doritos didn't intend to make a statement one way or another about the sanctity of life. Doritos chips are full of terrible stuff, and if you eat too many of them, you will die sooner than you should. Literally no one will change their beliefs about the complicated and controversial topic of abortion because of a Doritos commercial, so let's stop pretending that anything but more doofy dads eating chips in ultrasound rooms are going to come out of this dumb ad. (So many dads! Can't you see it now? They're dangling their favorite foods over their wife's belly and going, "heh, heh, heh, like that Doritos commercial, you know?" And if you have to ask someone if they know, the joke isn't funny.)

Lessons learned: None. Go back to eating your queso. America is ridiculous.