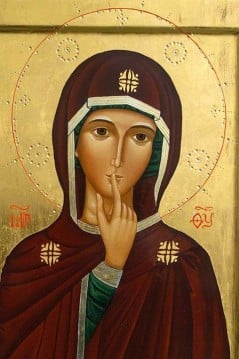 (RNS) In the good old days — that is, before 2013 when Francis was elected pope — if you wanted to silence someone in the Catholic Church you traditionally got the Vatican’s Congregation for the Doctrine of the Faith to investigate them and issue an order to stay quiet, or else.

Now, it looks like Francis is taking a different tack, and with a different aim — using the Virgin Mary to get Vatican officials to stop gossiping among themselves about each other.

Paolo Rodari, the Vatican beat reporter for the Italian daily La Repubblica, noted in a Facebook post last week (Feb. 3) that for several months this icon of the Virgin Mary above, with her finger to her lips, has been hanging in the Apostolic Palace between the two elevators that are used for going up and down to what is in effect the West Wing of the Vatican.

The image was placed there at the behest of Francis, Rodari reports; it was given to the pontiff last spring by Mariella Enoc, head of the famous Bambin Gesù pediatric hospital in Rome, and was created in a monastery in Novara in northern Italy.

The motive for the placement, Rodari guesses, is “to maintain an atmosphere of silence.”

Not that the Apostolic Palace is exactly a frat house.

But as Rodari goes on to suggest, Francis has regularly blasted his own Roman Curia for indulging in the “terrorism of gossip” — a phrase he re-purposed last week when he told members of religious orders to avoid the “terrorist bomb” of gossip and back-biting in their communities.

Can Our Lady of the Shush seal the deal?