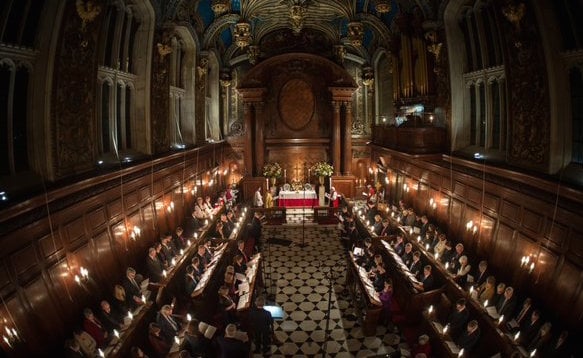 CANTERBURY, England (RNS) For the first time in 450 years, a citadel of Protestant worship in England -- the Chapel Royal at Hampton Court Palace -- echoed to the sound of Roman Catholic prayers and music.

Around 350 people assembled on Tuesday (Feb. 9) inside the ornate palace, about 15 miles from London, as Cardinal Vincent Nichols, head of the Roman Catholic Church in England and Wales, led a solemn vespers service, known in the Church of England as evensong.

The service was a symbolic act cementing growing ties between this country’s two leading Christian faiths, Catholicism and Anglicanism, divided since the Reformation.

Both are grappling with internal divisions on the issues of women priests and bishops, sex scandals and Christian rights for gay men and women, and are keen to emphasize what they have in common.

"There is much historic resonance about this moment, but in this place, where so much of the impetus of the Reformation was created, was provoked, I think we can now find ourselves side by side with a musical tradition that we share," Nichols said after the service.

Not everyone was pleased, though. A handful of protesters stood on a nearby bridge over the River Thames, including the Rev. Dominic Stockford, chair of the Protestant Truth Society, founded in 1889 to protest against the supposed influence of Roman Catholicism in the Church of England.

"The Roman Catholic Church will treat this as a coup," Stockford told RNS.

Several other protesters from evangelical congregations carried banners reading "The Church of England is denying its own faith" and "Reversing the Protestant Reformation means abandoning the Bible."

And British newspapers on both sides of the political spectrum wondered whether Henry VIII would be "turning in his grave."

The service included 16th-century chants and hymns in Latin, readings from the Bible and the saying of the Magnificat (Luke 1: 46-55). It was assisted by one of the most senior clerics in the Church of England, the bishop of London, Richard Chartres.

In his homily, Chartres spoke of the "tumultuous consequences" of the split between England and Rome during the reign of Henry VIII. And in response to Nichols’ description of Catholics as a "significant minority," the bishop of London replied: “Of course, we are all minorities now."

In the 16th century, the Chapel Royal at Hampton Court was very much the home of Catholicism in England. Built by Cardinal Thomas Wolsey, who failed to gain a divorce for Henry from Queen Catherine of Aragon so he could marry his mistress Anne Boleyn, it became one of the king’s favorite homes.

Henry, who had been given the hereditary title "Defender of Faith" by the pope for the book he wrote denouncing Germany’s reformer Martin Luther, often worshipped at the royal chapel.

After Henry's death in 1547, his son Edward ruled for a short while before his daughter Mary, a strong Catholic, came to the throne.

It was during her reign that the last Catholic service was held at Chapel Royal.