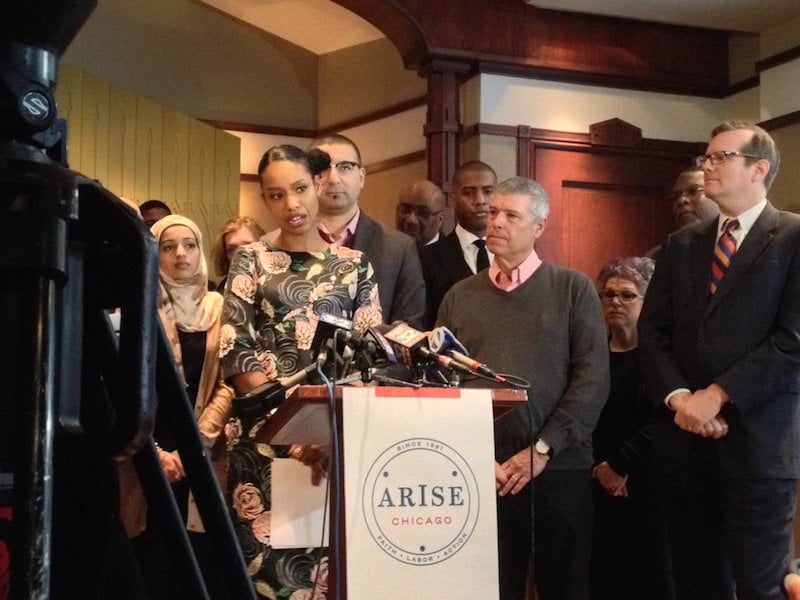 CHICAGO (RNS) At an often-emotional press conference to discuss the confidential agreement they had reached to part ways, Wheaton College’s president and Larycia Hawkins expressed gratitude for their time together.

The evangelical school had moved to fire Hawkins, a tenured political science professor, after she said Muslims and Christians worship the same God. The school’s action stirred up intense public scrutiny, especially after Wheaton’s faculty diversity committee issued a memo calling the administration’s proceedings against Hawkins “discriminatory on the basis of race and gender.” On Saturday (Feb. 6), Wheaton and Hawkins issued a joint statement announcing that the college would drop the termination proceedings and that she and the school would part ways.

At a joint press conference Wednesday (Feb. 10), Wheaton President Philip Ryken — commenting publicly for the first time — said the college will move forward with an effort to address “the issues that brought us to this point.” He did not elaborate.

Ryken noted that reconciliation doesn’t mean everybody on every side is satisfied. “But,” he added, “we are saying we are moving forward in genuine friendship, wishing each other well and wanting to bless each other and our work,” he said.

Hawkins was joined by Ryken and about two dozen interfaith clergy, faculty, alumni and other supporters at the press conference “in pursuit of further public reconciliation” at First United Methodist Church at the Chicago Temple.

Wheaton Provost Stan Jones noticeably was absent, his name scribbled out on the agenda for the event.

RELATED STORY: Is Wheaton reconciled with Doc Hawk or with conservative evangelicals? (COMMENTARY)

“My journey at Wheaton College is part of my journey,” said Hawkins. “It’s not the end of my journey. There are no goodbyes — only good memories.”

Tears streaked her face as she spoke about her students, who she said taught her what “embodied solidarity” looks like.

Wearing a hijab to identify with American Muslims during the Christian season of Advent leading up to Christmas was an act of “embodied solidarity,” she said. And continuing to stand with — not apart from — Wheaton is what embodied solidarity means.

During the news conference, Ryken thanked Hawkins for developing Wheaton’s new certificate program in peace and conflict studies. That’s a program the college is committed to continuing after her departure, inviting Muslim and Jewish scholars to dialogue about interfaith relations.

He also announced the college would establish an endowed scholarship in her name for interns to pursue summer projects in peace and conflict studies.

Hawkins was placed on leave and termination proceedings against her started in December after she posted a photo of herself wearing a hijab on her personal Facebook page. It wasn’t the hijab that gave Wheaton pause, the college has said, but the caption the tenured professor of political science posted with the photo: “I stand in religious solidarity with Muslims because they, like me, a Christian, are people of the book. And as Pope Francis stated last week, we worship the same God.”

She later made additional posts on Facebook and Twitter reaffirming that Muslims and Christians worship the same God, which the college has said seemed “inconsistent with Wheaton College’s doctrinal convictions.”

Some supporters were not so happy with Wednesday’s talk of reconciliation.

“A lot of students and alumni don’t see this as full reconciliation,” said Clara Kent, a 2014 Wheaton graduate who describes Hawkins as a mentor and now works near the Chicago Temple at the Chicago Lawyers Committee for Civil Rights. “We don’t see it as reconciliation at all. It feels like the college took the easy way out.”

The demonstration was meant to begin a “fast of embodied solidarity” calling on Wheaton and all of the nation’s evangelical Christian institutions to confess and repent of racism, sexism and Islamophobia — issues many see at the heart of the controversy — during the 40 days of Lent. The fast doesn’t have to include abstaining from food but is meant to encourage intentional engagement in dialogue or prayer, according to a press release from organizers.

Individual members of other institutions, including Calvin College in Grand Rapids, Mich.; Columbia Theological Seminary in Decatur, Ga.; and Westminster Presbyterian Church in Santa Fe, N.M., were invited to participate.

Wheaton students, faculty and staff had gathered for a reconciliation service the night before at Edman Chapel, where Ryken and Hawkins had spoken about lamentation, according to tweets from the service by Kirkland An, editor-in-chief of the college’s student newspaper, the Wheaton Record.