Logo of the 19th-century People’s Party

The Tea Party may be over and the Occupy camps a fading memory, but this year’s election is their will and testament. Donald Trump and Bernie Sanders have inherited the anger they tapped and the energy they created, and become the national leaders they lacked in their heyday.

The problem with the Tea Party was that it was a creature of the GOP, constructed to excite populist rage and channel it into Republican electoral victories. If the creature sometimes didn’t behave itself, it served that purpose but failed to satisfy the rank and file.

The problem with Occupy was that it was an anarchist exercise in show and tell, disconnected from anything that smacked of electoral politics. It captured a moment and then was gone with the wind.

Now the spirit of each has been seized by a candidate sailing under a false flag: Trump the Pseudo-Republican and Sanders the Democrat-of-Convenience. Each is promising a brave new world over the horizon.

Trump’s message is Restoration. His endlessly repeated “Make America Great Again” picks up the “restore America” mantra chanted by every Republican candidate for president four years ago. It is designed to capture the longing for an idealized past that animated the Tea Party masses.

In antebellum America an idealization of primitive Christianity spawned Restorationist Protestant denominations like the Disciples of Christ and the Church of Christ, and new religious traditions like Mormonism. Evangelical Protestantism as a whole drank  the Kool-Aid. Beginning with Ronald Reagan’s “Morning in America,” a secularized incarnation of it has captured Republican hearts and minds, not least by appealing to old-time evangelical and Mormon millennialism.

Sanders laces his speeches with the Occupy mantra of the one percent. His digital platform peopleforbernie.com and his brilliant hashtag #FeeltheBern were created by Occupy veterans Winnie Wong and Charles Lechner. But don’t take my word for it. My son Ezra, who spent a year traveling around the country reporting on Occupy sites (and Ez, you’ve got to finish up that book!), was in Iowa two weeks ago doing climate change activism, and has this to report:

I attended two Bernie Sanders rallies in Des Moines – one on the eve of the Caucuses, the other on the night of the Caucuses. It felt quite a lot like the early days of Occupy Wall Street – except with a leader.

Similarities included an ambiguous left-wing populism, lots of excited 20- and 30-somethings (about 80-90 percent white), a crowd of bemused-looking national media reporters, and a huge level of collective excitement.

Like Occupy, there was catharsis in the air as the disenfranchised banded together to curse the darkness – namely, the moral catastrophe of neoliberal capitalism. There was also an overwhelming sense that participatory democracy could save the day.

But this time around, the rejection of electoral politics and the state is gone. Anarchism and leaderlessness are passé. In Occupy, hope came from the sudden emergence of a left-wing populist movement that would revolutionize American culture through direct democracy. The hope now is to seize the state through a political revolution that will topple the billionaire class and restore democracy.

So the Occupy generation is a little older and wiser. In New Hampshire, they (Democrats under 30) voted 83 percent to 16 percent for Sanders over Clinton, an astonishing margin no doubt enhanced by Madeline Albright’s “There is a special place in Hell for women who don’t vote for Hillary” — a remark that will earn Albright a place in American political history beside the Presbyterian preacher who in 1884 sank James G. Blaine’s presidential candidacy by describing the Democrats as the party of rum, Romanism, and rebellion.

I don’t mean to suggest that Sanders’ social democratic vision of an America with single-payer health care, higher taxes on the rich and their stock transactions, free college, and campaign finance reform is the left-wing equivalent of Trump’s nativist fantasy of a Mexican-financed southern border wall, Muslim exclusion, and the reestablishment of a mid-twentieth-century industrial economy. But there is a sense in which voting for either of them is like buying a lottery ticket. It lets you dream.

In a dysfunctional political system deeply frustrating to many citizens, dreams can have consequences. We’re about to find out. 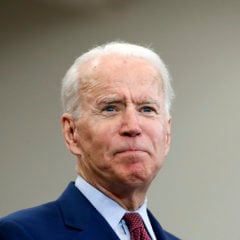 Opinion
Why Bernie Sanders brings out the Muslim vote 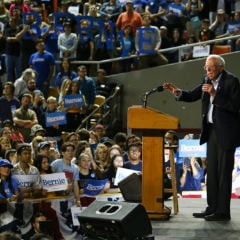 Signs of the Times
Democrats ignore Catholic voters at their own peril
Follow us on Facebook!
Submit your photos to RNS