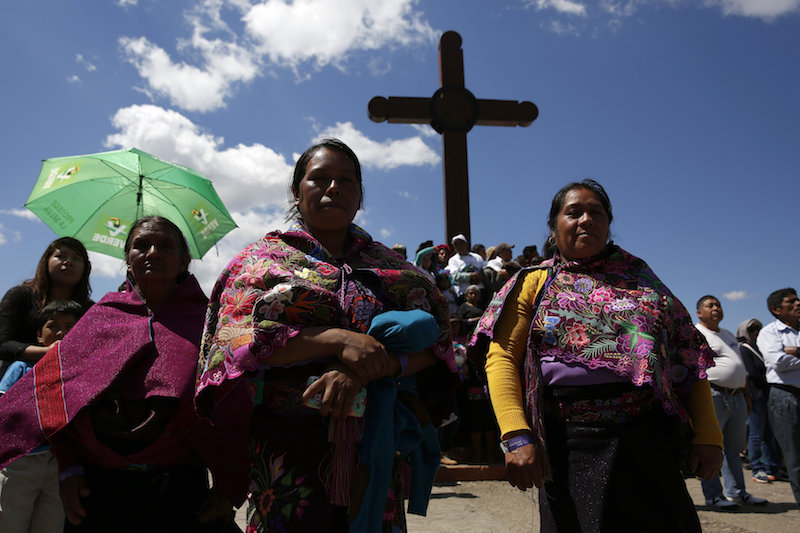 People wait for the arrival of Pope Francis outside the cathedral in San Cristobal de Las Casas, Mexico, on Feb. 15, 2016. REUTERS/Carlos Garcia Rawlins

SAN CRISTOBAL DE LAS CASAS, Mexico (Reuters) - Pope Francis embraced Mexico's poor indigenous south on Monday, denouncing the people's "systemic" exclusion from society and encouraging the use of native languages in Catholic worship in a bid to stem a tide of Protestant conversions.

The region, mired in poverty and plagued by rising insecurity, has fallen far behind other parts of the country economically.

Preaching to a packed crowd at a sports ground in the southern state of Chiapas, the pope quoted the Popol Vuh, a sacred Maya text, and drew comparisons between Catholic and indigenous values.

"Today's world, ravaged as it is by a throwaway culture, needs you!" he said as he celebrated a Mass that included bible readings in native tongues, referring to the mostly indigenous throngs who loudly cheered him.

"You have much to teach us," he said, lauding Mexico's native peoples while denouncing "the systemic and organized way your people have been misunderstood and excluded from society."

He said the Mass before a Hollywood-style stage set replica of the facade of the colonial-era city's main cathedral.

Many women wore indigenous dress of black skirts and colorful tops, their hair braided with ribbons and parts of the Mass were said in the Tzeltal, Ch'ol and Tzotzil languages.

The state of Chiapas was the scene of the Zapatista uprising of Maya rebels in the 1990s. It is now the frontline of a government crackdown on illegal immigration to the United States from Central America.

When the Zapatistas burst onto the scene, more than two- thirds of Chiapas' population was Roman Catholic. The expansion of evangelical Christianity through poor indigenous towns since has driven the number down to around 60 percent, making it Mexico's least-Catholic region.

In the colonial mountain city of San Cristobal de las Casas, the pope will visit the church that houses the tomb of Bishop Samuel Ruiz, a champion for indigenous rights and served as a mediator between the Zapatistas and the government.

Ruiz, who died in 2011, long lobbied to permit Mass in languages such as Tzotzil because many of the region's Maya residents do not speak Spanish.

"He is bringing a message for us to ... become Catholic again," said Rocío Roman, 58, a local bank manager. "San Cristobal used to be more Catholic, but many people, mostly indigenous, have converted to other religions."

The pope last year apologized for the role of the Church in the conquest of Latin America and he is expected to formalize a Vatican decree while in Chiapas to authorize translations of the liturgy.

Francis is visiting some of the most marginalized parts of Mexico. On Sunday, he took a swipe at the its rich and corrupt elite in a Mass near the cinder block slums of Ecatepec, one of the country's most violent cities.

The poverty rate in Chiapas, already the most impoverished state in Mexico, has risen in recent years to more than three-quarters of the population.

Francis may highlight the struggle of Central American migrants during his visit. He will also meet indigenous leaders and hold a stadium rally in the capital of Tuxtla Gutierrez.

Thousands of people from neighboring Guatemala are believed to have crossed over the porous border of rivers and jungle in Chiapas for a chance to see the pope.

On Tuesday, he will speak to youths in Morelia, the capital of Michoacan state, where warring drug gangs cook much of the methamphetamine smuggled into the United States.

He will then travel to Ciudad Juarez, which borders with the U.S. state of Texas, where he will pray for migrants and victims of violence.