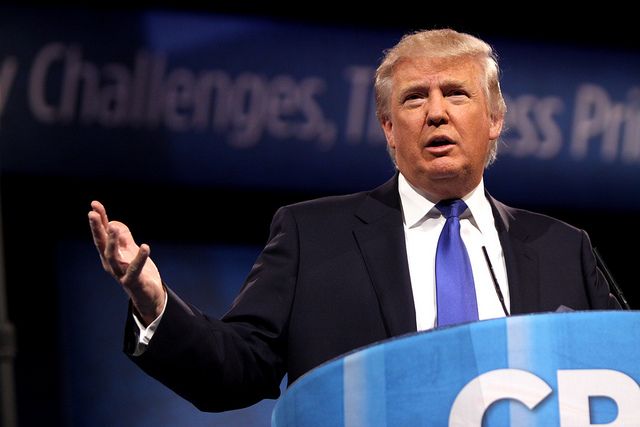 In a twist that religion reporters will be spilling ink on for days to come, Pope Francis spoke yesterday aboard his papal airliner about Republican presidential candidate Donald Trump. “A person who thinks only about building walls, wherever they may be, and not building bridges, is not Christian,” the Pope told a group of reporters when asked about Trump.

This might sound like bad news for Trump, who has been courting the conservative Christian vote during most of his candidacy: In January, a poll found that 37 percent of white evangelical Republican voters were behind Trump. Some prominent evangelicals, including Russell Moore, president of theEthics & Religious Liberty Commission of the Southern Baptist Convention, have been critical of Trump; others, like Liberty University president  Jerry Falwell, Jr., have publicly praised him. Trump has divided evangelicals with his numerous religious gaffes and aggressive behavior, but he continues to draw support from the most conservative among them.

Trump’s camp was quick to issue a response to the Pope’s remarks. It started off in a Trumpian fashion, imagining a future date when the Vatican will be attacked by ISIS and “the Pope would have only wished and prayed that Donald Trump would have been President.” (It’s unclear why Trump isn’t president in his own hypothetical fantasy, but that’s neither here nor there right now.) Trump’s response goes on to attack the Pope for not seeing both sides of the story about the US and Mexico, and calls Pope Francis’s remarks “disgraceful.”

“I am proud to be a Christian,” Trump continued, “and as President I will not allow Christianity to be consistently attacked and weakened.” Nevermind that the Pope has arguably done more good for global Christianity than anyone since Mother Teresa–Trump needs to make a point, and a favorable comparison of his faith to the Pope’s is just the ticket. It turns out that conservative Christians, especially evangelicals, have a deep-seated distrust of Catholics. This is anecdotal, but the evangelical church I grew up in was always urging us to bring our Catholic friends to church–the implication being that Catholics are not real Christians. Their veneration of Mary (which we called “worship”) is disdainful to many evangelicals, and their adherence to liturgy and ritual strikes many conservative Christians as confusing and legalistic. Having the Pope as a nemesis may actually bolster Donald Trump’s ratings among the conservative evangelical Christians who are already afraid of immigration and their gun rights being taken away.

There are very few people who could spin a denunciation by the Pope into campaign success. Unfortunately for us, Donald Trump may be one of them.