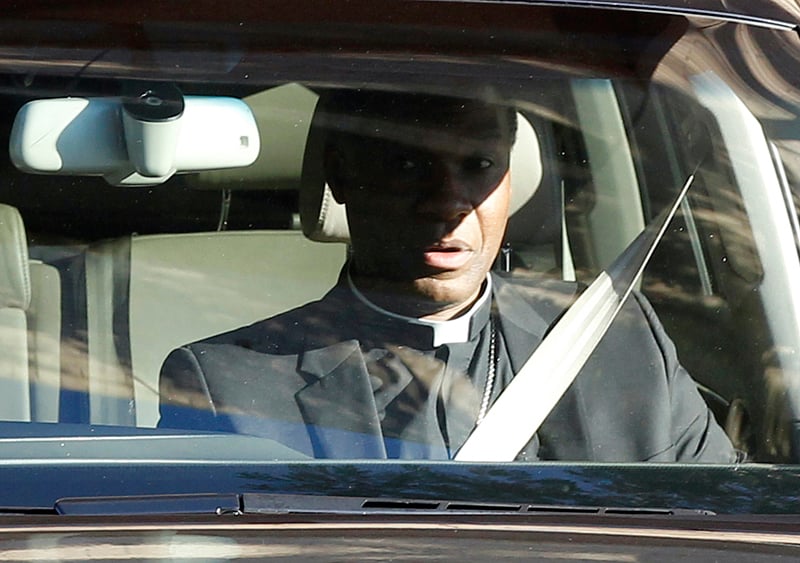 Anglican Archbishop of Cape Town Thabo Makgoba leaves a Pretoria hospital where Nelson Mandela was being treated on June 25, 2013. Photo courtesy of REUTERS/Siphiwe Sibeko
*Editors: This photo may only be republished wtih RNS-SAFRICA-ANGLICAN, originally transmitted on Feb. 22, 2016.
February 23, 2016
Fredrick Nzwili

(RNS) South Africa’s Anglican bishops have taken an initial step toward including LGBT people as full members of their congregations with the passage of a resolution at a meeting in the Grahamstown Diocese. Anglican Archbishop of Cape Town Thabo Makgoba leaves a Pretoria hospital where Nelson Mandela was being treated on June 25, 2013. Photo courtesy of REUTERS/Siphiwe Sibeko *Editors: This photo may only be republished wtih RNS-SAFRICA-ANGLICAN, originally transmitted on Feb. 23, 2016.

"I believe its adoption by Provincial Synod would be an important first step signaling to the LGBT community that we … see them as welcome members,” Makgoba said in a pastoral letter dated Monday (Feb. 22).

If the synod adopts the resolution, the South African church will be the first African province of the Anglican Communion to welcome gays and lesbians as full members.

According to Makgoba, the resolution would open the doors for the baptism and confirmation of children of same-sex couples.

“No child brought for baptism should be refused merely because of the sexual orientation of the parents,” said Makgoba, while warning that particular care should be taken against stigmatizing the parents or the children.

The Rev. Michael Kimindu, president of Other Sheep Africa, a multicultural ministry for sexual minorities, said he thinks other churches in Africa may follow.

At the same time, Makgoba said the bishops did not reach agreement on marrying same-sex couples in church or allowing clergy to enter same-sex civil unions.

“Most of our dioceses across Southern Africa are predominantly rural, and for many the urgent priorities of food security, shelter, health care and education crowd out debate on the issue of human sexuality,” Makgoba said.

“In some rural dioceses, responding to challenges to the church's restrictions on polygamous marriages is a much higher pastoral priority,” he added.

In this way, the bishops agreed to follow the broad consensus of the Anglican Communion, which states that provinces "cannot advise the legitimizing or blessing of same-sex unions nor ordaining those involved in same gender unions."

Makgoba said the bishops were determined to avoid splits in the Anglican Church in Southern Africa.

Related Posts
By Jack Jenkins
Blasting lawmakers, USAID official quits over alleged 'anti-Christian sentiment'
By Alejandra Molina
‘Your fight is my fight’: Latino clergy and faith leaders rally behind Black Lives Matter
By Yonat Shimron
Religious conservatives look to the next Supreme Court rulings on religious liberty
By Mark Silk
Measuring the religious significance of the Supreme Court's LGBT decision
By Alejandra Molina
Four young people of different faiths move into a home together, then a pandemic happens