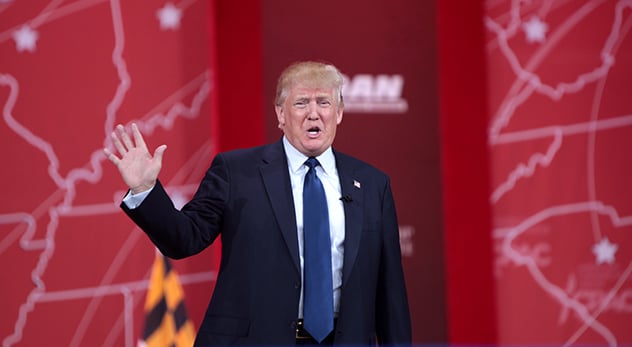 When Donald Trump insinuates the federal government is mistreating Christians, many of these religious voters say “amen.” – Photo courtesy of Gage Skidmore (http://bit.ly/1Tcxrgy)

Donald J. Trump wears many hats: real estate mogul, a reality television star, fashion merchandiser, a mediocre mail-order steak conossuier, a board game inventor, and of course, a Republican presidential hopeful. But you can add another title to the list after last night: persecuted Christian.

In an interview following the GOP presidential debate on CNN, Trump stated that he could not release his tax returns because he was currently being audited by the Internal Revenue Service. The candidate then went on to speculate that perhaps the IRS was targeting him because of his faith.

“Well, maybe because of the fact that I’m a strong Christian, and I feel strongly about it, maybe there’s a bias,” Trump said.

The idea that Trump has drawn a target on his back for being too outspokenly religious surely ranks as one of the more ridiculous statements made by a man with a history of outlandish remarks. But it will likely appeal to some conservative Christian voters who feel they are increasingly being marginalized in American society and even persecuted for their beliefs.

It’s poor form for many reasons to speculate about the authenticity someone’s self-proclaimed faith. If Mr. Trump says he is a Christian, he is a Christian so far as I’m concerned. But his claim to be a “strong” Christian who “feel(s) strong about it” is a expression of deep devotion and commitment, which are challenged by Trump’s actions themselves.

He claimed the Bible was his favorite book and even waved one around at a rally, but was unable to name his favorite verse. He has said he’s never asked God for forgiveness. And while Trump claimed to be a faithful member of a Presbyterian church, the congregation’s leaders released a statement saying he was not an “active member.” And of course, there was the whole “two Corinthians” debacle.

This is not to say that the candidate’s commitment to his faith isn’t “strong” in some sense. But Trump has not been outspoken about it until recently, so it is highly unlikely that he is being attacked for it. Yet some conservatives will still find his speculation believable since the IRS has been recently accused of unfairly targeting conservative groups.

Trump’s seemingly stupid comments might actually be a smart move. The assertion appeals directly to the voters he’s been working hard to capture: conservative Christians. The candidate has been ramping up his outreach to evangelicals since speaking at Jerry Falwell’s Liberty University. This week, he met with Pat Robertson and spoke at the televangelist’s Regent University. Last week, he captured 41 percent of the white evangelical vote in the Nevada caucuses.

Will Trump garner sympathy from conservative Christian voters by playing the persecuted Christian card? He will among at least some. According to a recent Pew poll, white evangelical Christians believe they are the most persecuted group in America–more than blacks, hispanics, and Jews. When Donald Trump insinuates the federal government is mistreating Christians, many conservative religious voters say “amen.” Even if saner voices cry, “oh my.”