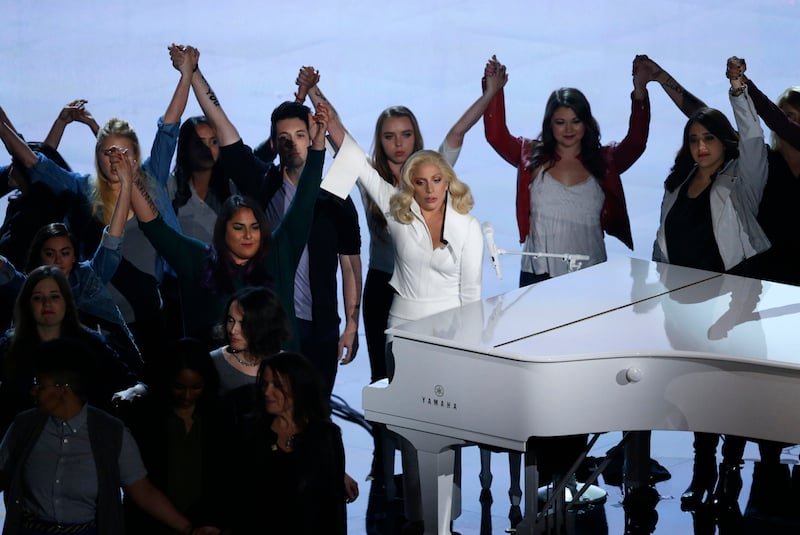 Lady Gaga sings her Oscar-nominated song "Til It Happens to You" at the 88th Academy Awards in Hollywood, California February 28, 2016. Vice President Joe Biden made a special appearance at the Oscars ceremony on Sunday to advocate for victims of sexual assault and introduced a powerful performance by Lady Gaga that featured survivors of sexual abuse. REUTERS/Mario Anzuoni TPX IMAGES OF THE DAY - RTS8HBB
February 29, 2016
Laura Turner

Lady Gaga sings her Oscar-nominated song "Til It Happens to You" at the 88th Academy Awards in Hollywood, California February 28, 2016. Vice President Joe Biden made a special appearance at the Oscars ceremony on Sunday to advocate for victims of sexual assault and introduced a powerful performance by Lady Gaga that featured survivors of sexual abuse. REUTERS/Mario Anzuoni TPX IMAGES OF THE DAY - RTS8HBB

Last night's Oscars saw a host of controversial topics being addressed. Chris Rock's opening monologue was devoted almost entirely to the lack of racial diversity at a ceremony that, for the second year in a row, saw only white nominees in all twenty actor and actress spots. Sam Smith won for an objectively terrible song and called himself the first openly gay man to win an Academy Award (he's not even in the first five). Leonardo DiCaprio won an Oscar for being mauled by a bear! It was a night.

Even something as seemingly commonsense as preventing campus sexual assault stirred up a whirlwind of controversy. Vice President Joe Biden who, with President Obama launched the "It's On Us" campaign to stop sexual assault on college campuses, got a standing ovation when he came on stage to introduce Lady Gaga. Her Oscar-nominated song, "'Til It Happens To You," is a somber tune from the documentary "The Hunting Ground," about alleged sexual assault on college campuses in America. Biden spoke about progress that had been made over the last few years, but noted that "too many woman and men on and off college campuses are still victims of sexual abuse. Tonight, I’m asking you to join millions of Americans including me, President Obama, the thousands of students I’ve met on college campuses and the artists here tonight to take the pledge.” The pledge "says I will intervene in situations where consent has not or cannot be given," Biden said.

Lady Gaga then performed the  song surrounded by dozens of campus sexual assault survivors, male and female alike. With phrases like "Survivor" and "Not Your Fault" written in marker on their arms, the survivors stood hand-in-hand and made the Oscar audience--both in the Dolby Theatre and the tens of millions at home--confront the reality of sexual assault.

It was a powerful moment, but not universally revered. Conservative Twitter users were quick to jump on the irony of Biden, a man who has a reputation for being touchy with the women around him, condemning sexual assault:

Others somehow thought that the Oscars were the wrong place to be talking about sexual assault:

@lkoturner "Joe Biden talking about sexual abuse at the Oscars?
Where more sex is showcased than any other place in the world?"@PhilCooke

Which might lead a person to wonder...when is a good time and place to talk about sexual abuse? And who is the right person to do it? Sure, Biden's light lechery might have earned him the nickname "Uncle Joe," but is that tantamount to sexual assault? This is the man who introduced the Violence Against Women Act into Congress in 1990 and, as Vice President, appointed the first-ever White House Advisor on Violence Against Women. Is he the perfect spokesperson against sexual assault? No, but if we waited for the perfect spokesperson we might be waiting for a long time. People in power have voices that can be heard, and Biden is using his now for a really good cause.

The showcasing of sex at the Oscars is another line of defense that makes little sense. Does Hollywood glamorize sex, or portray it in unrealistic ways, or give us films with gratuitous sex? Sure! Does it also handle sex carefully and in interesting, nuanced ways? Yes. Silencing any discussion about sexual assault because of Hollywood's (whatever "Hollywood" means these days) past sins is being complicit in shutting down one of the most important conversations of our time because you don't like the terms or the parties involved. Hollywood is the perfect place to have a conversation about sexual assault, because Hollywood is filled with powerful people, arbiters of taste and culture who need to know how serious this issue is.

Sexual assault on campus is too serious of an issue to wait around on. I, for one, am exceedingly grateful that Biden and Lady Gaga and others are willing to use their positions to elevate the conversation now, imperfect as it may be.