Donald Trump is close to being the de facto Republican nominee for President. His coalition unexpectedly includes many religious conservatives. How is this possible? 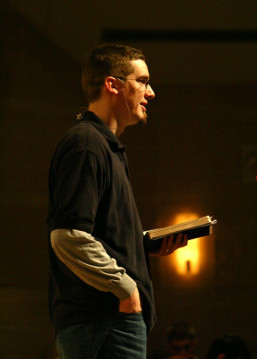 Just recently a number of political scientists have proposed that Trump may be activating so-called “authoritarians.” These authoritarians are a large segment of the population who share a personality trait. Authoritarians seek strong, powerful leadership and fear many types of minorities.

According to this theory, Trump has been masterful act activating this personality trait by continuing to talk about the threat of illegal immigration and ISIS attacks inside the United States. As political scientist Jonathan Haidt has written, authoritarians become active when threatened:

when [authoritarians] perceive that the moral order is falling apart, the country is losing its coherence and cohesiveness, diversity is rising, and our leadership seems (to them) to be suspect or not up to the needs of the hour, its as though a button is pushed on their forehead that says “in case of moral threat, lock down the borders, kick out those who are different, and punish those who are morally deviant.”

In recent polling, authoritarianism has been the most predictive factor in supporting Donald Trump.

Could authoritarianism be a reason why some religious conservatives are supporting Donald Trump, a candidate whom they would normally find far less than ideal?

Authoritarianism plays a part in religious life. The Religious Right was a movement that was synonymous with strong, unquestioned leadership. Men like Jerry Falwell, James Dobson, and Pat Robertson were the singular authorities on matters of scriptural interpretation and politics during the height of their power. Trump’s circle of clergy include fundamentalists who value strong leadership in churches and in politics.

In my own research, I’ve found some interesting connections between religious beliefs and authoritarianism. I sent a survey out to clergy in several established denominations, and asked them how much they agreed with a number of statements regarding how religious congregations should be structured and led.

In addition, I asked clergy a battery of questions to gauge their overall religious conservatism. This conservatism measure is based on how much they agreed or disagreed to theological statements:

Both scales run from 1-5 with higher levels indicating more trust in religious authority or being more religiously conservative. See the geek note below for more details. 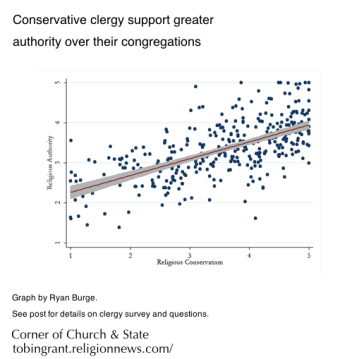 It’s clear that there is a positive relationship between trust in religious authority and being conservative on theology. Those at the “liberal” end of beliefs averaged about two on the authority scale; those with the most “conservative” beliefs were near a four.

It turns out that those who are higher on the religious authority scale are also more supportive for authoritarianism in politics. Even after I take into account their political positions and other factors, clergy who are more authoritarian in how they run their congregations are often less supportive of foundational values that are important for a properly functioning democratic society.

I’ll have the details on this link between religious and political authoritarianism in my next post.

Ryan Burge @ryanburge researches religion and politics. He is currently studying the politics of the emerging church movement.

The survey was drawn from the Southern Baptist Convention, the United Methodist Church, the Reformed Church in America, the Presbyterian Church (USA), and clergy from the Greek Orthodox Church.

Religious conservatism: An averaged index composed of 5 questions. Each is coded from 1=strongly disagree to 5=strongly agree (except for the fifth, which is reverse coded), Cronbach’s alpha =.92. The items include: “Jesus was born of a virgin;” “The Devil actually exists;” “The Bible is literally true;” “There is an objective standard of right and wrong established by God’s Word;” “Men are given authority over women.”

Religious authority: An averaged index composed of 5 questions. Response items ranged from strongly disagree to strongly agree, the index was coded to run from 1 to 5 (α=.66). The items include: “The more clergy can step out of the way of the congregation the better;”  “It is important for the congregation to construct their own salvation;”  “The Gospel is what the congregation makes of it;” “I believe there are many valid interpretations of the Bible;” and “The church must adapt to a postmodern culture in order to spread the Gospel.”