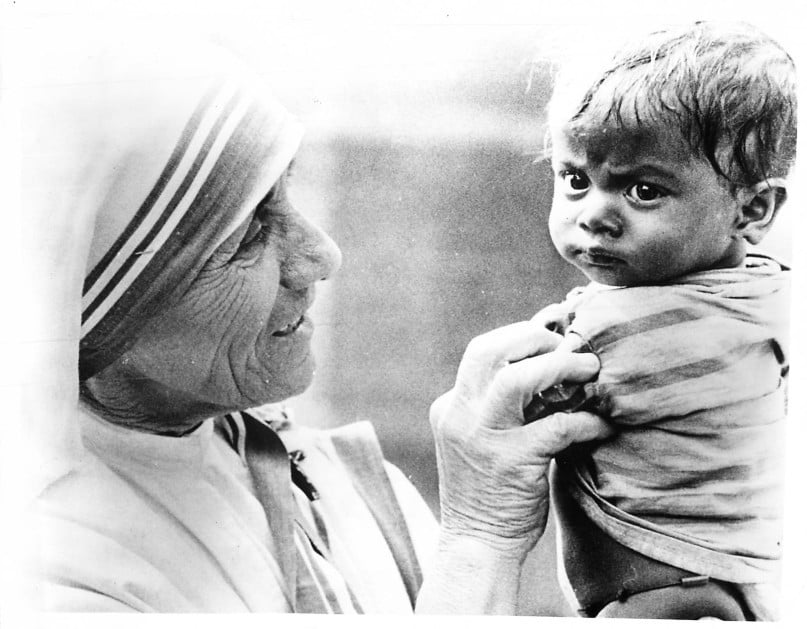 (1977) Mother Teresa of Calcutta, shown with an Indian child, worked to help sick and homeless victims in the cyclone-ravaged Indian state of Andhra Pradesh. She said her Missionaries of Charity nuns have “all the experience necessary to work in this disaster area because of previous efforts during floods.” “In all these human tragedies, God is trying to teach us something. We are not able to understand him,” she said as she went about supervising the rescue operation. Religion News Service file photo

VATICAN CITY (RNS) Mother Teresa of Calcutta will be made a saint on Sept. 4.

Pope Francis made the announcement on Tuesday (March 15) during a meeting with Catholic cardinals, which also saw four others approved for sainthood this year.

Approval from the pontiff marks the definitive stage in the path to sainthood for the Albanian nun, who became reputed globally for her charity work in India. Mother Teresa’s canonization will come almost exactly 19 years after her death on Sept. 5, 1997, a relatively speedy sainthood for the Catholic Church.

The Rev. Brian Kolodiejchuk, the postulator behind Mother Teresa’s canonization case, welcomed the news on behalf of the Missionaries of Charity, the congregation founded by the nun. “With her canonization, the Church presents her as a model and intercessor of those who, like her, ‘long to light the fire of love and peace throughout the world,'” he said.

“May we all continue to live and deepen our awareness of being in need of mercy and our willingness to extend mercy in our communities, in our families and in our service of the poor,” Kolodiejchuk added.

The pope’s final clearance for Mother Teresa’s sainthood has been anticipated since his approval in December of a miracle attributed to her, through which a Brazilian man in 2008 woke from a coma after prayers to the nun.

Francis signed the canonization decree 13 years after St. John Paul II beatified Mother Teresa — a significant step in the sainthood process — after attributing another miracle to her intercession.

The canonization is expected to be held at the Vatican after Francis failed to respond to an invitation from the Indian bishops’ conference to hold the ceremony in that country, The Times of India reported.

High-ranking members of the Missionaries of Charity will travel to Rome for the canonization, bringing a relic of Mother Teresa’s blood, while the two people healed through the two miracles are also expected to attend, the newspaper said.