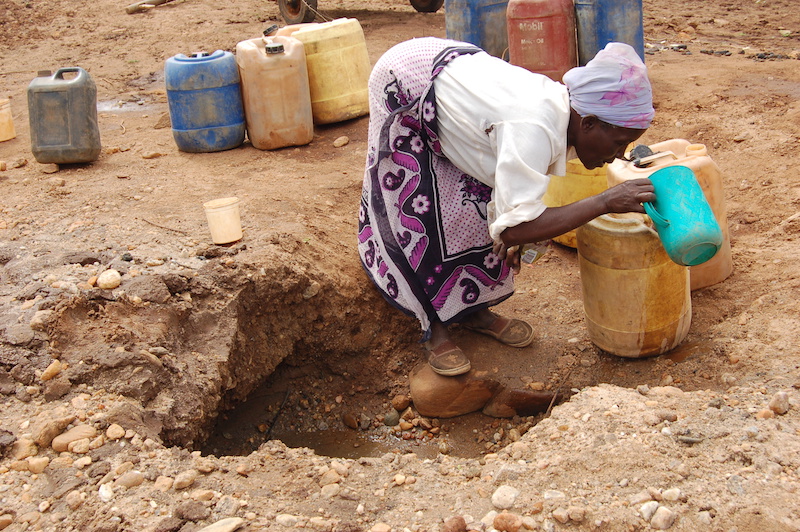 A woman scoops water from a dry riverbed in Machakos in eastern Kenya in 2009. The drought has worsened along the horn of Africa. Photo courtesy Fredrick Nzwili

NAIROBI, Kenya (RNS) Churches in eastern and southern Africa are appealing for humanitarian aid in the region, as 36 million people grapple with the worst drought in decades.

“In parts of Somaliland, where people live on livestock and agriculture, the problem is serious,” said Roman Catholic Bishop Georgio Bertin of Djibouti, a country in the horn of Africa.

In 2011, a drought made worse by Islamic terrorism forced thousands of Somalis into a refugee complex in northeastern Kenya.

“We are intervening,” said Bertin who is relying on the help of Caritas, the Catholic relief organization. “We are providing food to very poor families. It is a gesture of solidarity.”

Over 10 million people face hunger in Ethiopia. Agencies are also racing to save the country from falling into a famine similar to the 1983-1985 one, which killed an estimated 1 million people. It was the subject of the December 1984 Band Aid charity single “Do They Know It’s Christmas?”

The Catholic Bishops Conference of Ethiopia said nine dioceses are affected by what they see as the worst-ever effects of climate change and environmental degradation.

“The severity of the situation is continuously increasing the number of people affected,” said Cardinal Berhaneyesus D. Souraphiel, the archbishop of Addis Ababa.

In February, Malawian Bishop Martin Mtumbuka of the Karonga Diocese stopped taking tithes and offerings due to the drought.