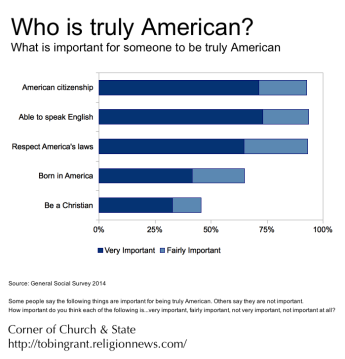 What does it mean to be American? For many, being a Christian is important to be truly American.

The most recent General Social Survey (GSS) listed off possible reasons why someone would be “truly American.” Topping the list are legal criteria: being a citizen, ability to speak English, and respecting political institutions and laws.

A majority of Americans also said that it was very or fairly important that a person be born in America.

The biggest divide was the importance of religion. One-third of Americans say that being a Christian “very important” for someone to be “truly American.” Another 13 percent said it is “fairly important.” There are significant differences across religious traditions.

Two-thirds of evangelicals say that true Americans are Christian. Those in historically black Protestant churches also put a high importance on being Christian.

Only a small number of the so called “nones” see faith as important to being American. Still, roughly one-in-ten see Christianity as linked to being a real American.

Donate Now!
Posted in
Arts & CultureBlack ProtestantsOpinionTobin Grant: Corner of Church and State
Follow us on Facebook!
Submit your photos to RNS