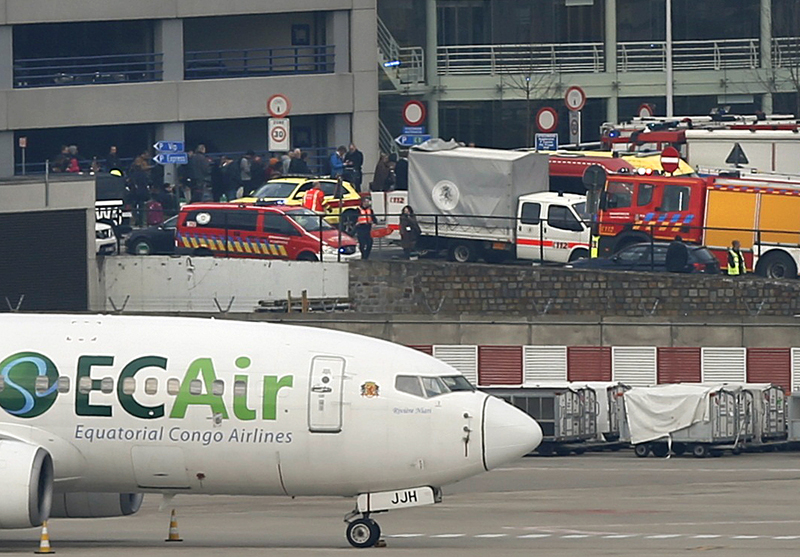 Emergency services at the scene of explosions at Zaventem airport near Brussels, Belgium, on March 22, 2016. Photo courtesy of REUTERS/Francois Lenoir
March 22, 2016
Jana Riess

This is not the post I planned to run today.

But this morning I learned of the awful attacks in Brussels. It hit home particularly because a good friend was in Brussels just a couple of days ago, so I'm experiencing that strange mixture of relief that he is home safely and horror at the senseless deaths and injuries that other people suffered today. 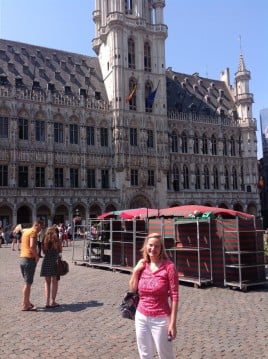 In the Grand Place in Brussels, summer 2014

In the last few months, terrorism has felt ever closer to home, as strikes have happened in places I have visited and loved: Istanbul, Paris, and now Belgium, where I traveled with my brother in 2014.

And it registered even more strongly when I got a call from a colleague at RNS about the fact that three Mormon missionaries from the France Paris mission were among the injured. Fox 13 in Salt Lake City reports their names as:

Later in the day, the LDS Church confirmed that a fourth missionary, Sister Fanny Rachel Clain, had also been hospitalized.

My sadness multiplied significantly when I heard all this news. Maybe it's my Mormon chauvinism talking: it probably doesn't speak well of me that the story only fully hit home when it began affecting my own people. I ought to be bigger than this.

And yet there is a particular pathos when hatred strikes young people. We have a young woman from my congregation right now who is serving a mission in Belgium (Dutch speaking). There's such joy attending her service -- and that of so many other missionaries, tens of thousands of others who volunteer their time and love for people they had never met until the day they received that call:

But every injury and death in Brussels -- and Paris and Damascus and Istanbul and Kano -- has happened to innocent people who also love their families, love to laugh, and have unfulfilled dreams ahead of them. It may be the missionaries' hospitalizations that brings the fact of terrorism home to many Mormons, but let it be a catalyst for us to acknowledge that they are all our children.

The hospitalization of three Mormon missionaries in Brussels prods me to remember: Every victim of terrorism could be my child, my sister, or my parent.

As the LDS Church put it in a statement today,

With much of the world, we awoke this morning to the heartbreaking news of the bombings in Belgium. Our prayers are with the families of the deceased and injured, including three of our missionaries who were injured and hospitalized. We also pray for the people of Belgium and France as they continue to deal with the uncertainty and devastation caused by the recent terrorist attacks.

Update, 3/23: Yesterday, the president of the France Paris mission, Frederic Babin, released a short video statement you can access here. He confirmed that four missionaries, not three, were being treated in the wake of the attacks.

"They’re doing okay, and they've been taken care of," he said. "And we’re looking at the possibility for them to feel better soon and to be able to get out of the hospital.”

Babin said that he asked all the missionaries in the area to stay in their apartments until he had the all-clear that they would be safe. Soon, he hopes, they  will be able to return to the reason they are in Belgium, “which is to preach the gospel.”

The missionaries, he said, are “wonderful men and women who are sending to the world a message of peace, of joy."