(RNS) If Dana Carvey’s Church Lady wrote a craft book, it would look a lot like “What Would Jesus Craft?: 30 Simple Projects for Making a Blessed Home.”

Born out of a lifelong collection of just plain wacky stuff gathered by author Ross MacDonald, the book blends tongue-in-cheek satire with tender regard for a 1950s Christian sensibility to serve up do-it-yourself craft projects that would make Jesus weep.

There’s the “Time-to-Obey-The-Lord Clock,” a slice of tree trunk where Jesus’ hands point to the word “pray” at every hour. And there’s the “Eye-See-You-in-Hell Mirror,” a giant, mosaic reflective eyeball framed with the words, “Missed seeing you at church last Sunday.”

And there’s “Jesus’ Pet Dinosaur Nacho Platter”  (since the Earth is only 6,000 years old, Jesus rode a brontosaurus). And who doesn’t love nachos when they’re served on a platter with a plastic dino and a Jesus action figure stuck on the rim?

Not all Christians will want to put down the colored eggs, Popsicle stick crosses and tissue paper stained-glass projects so popular during Lent and Easter. The book, MacDonald said, is for “Christians with a sense of humor.”

MacDonald, 58, is a lapsed Protestant who lives in Connecticut. Memories of his own Canadian childhood as the youngest of six served as fodder for many of the projects. He recalls attending church dressed in something of a Little Lord Fauntleroy suit, his older sisters in white gloves, sitting stiffly through the service until — finally! — being sent downstairs to Sunday school, where there were crayons, pipe cleaners, crepe paper and paints.

“Listening to this ancient preacher would put you to sleep,” he said. “And then you got to go downstairs and see all this cool stuff.”

And make some pretty awful stuff, too. MacDonald remembers taking a tin can, removing the lids, wrapping some fuzzy acrylic yarn around the sides. It is in the book as the “Count Your Blessings Card Display” — stick a couple of Christmas cards through the yarn and — voila! — Christian kitsch.

“My mother would faithfully haul those things out and every year plug those Christmas cards in,” MacDonald said. “Half of our tree was homemade stuff. There was lots of ugly.”

MacDonald has always been a glue gunslinger. He remembers making his own gas mask to protect him from his parents’ smoking.

It was stories like that that gave Holly McGhee, MacDonald’s agent, the idea for the book. MacDonald came up with over 60 projects for the book proposal, eventually whittled down to 30. He made weekly — sometimes daily — trips to the craft store.

“I was walking out with armloads,” he said. “I spent $300 to $600 every time I went. It was like a jam session. I still have tons of extra beads and rhinestones, bins and bins full of stuff.”

MacDonald, who is also an illustrator and a film-and-television prop master, photographed all of the projects, placing them in teasing tableaus — the “Last Supper Lunch Box” unpacks a bologna sandwich and a My Little Pony thermos, and the “Goblets of His Glory” glassware holds Schlitz beer. Then he developed a character, a la Stephen Colbert on “The Colbert Report,” to write the accompanying text and how-to’s.

“There is practically no surface in our lives that can’t be beautified with some reminder of His ever-watchful gaze,” MacDonald’s alter-ego writes in the introduction. “You can craft things that no store would ever sell!”

Writing for The Washington Post’s Book World, Ron Charles said it “walks that straight and narrow path between blasphemy and hilarity.”

Others are less favorable toward the whole enterprise of Christian kitsch — “Jesus Shaves” razors, “Testa-mints” breath mints and the like, which would all find a home in MacDonald’s collection.

“If a product cheapens the deep, sacred realities of the Christian faith then the Christian community should resist buying those items,” James Beverley, a professor at Tyndale University, told The Christian Post in a story about the popularity of such products.

But MacDonald is serene.

“I have had people who said, ‘I am going to make some of this with my Sunday school class,'” he said. “I think that’s because I set out not to mock Christianity. I have too many Christian friends I respect for that.”

Then he added: “But I don’t know. The mob could be gathering just down the street as we speak.” 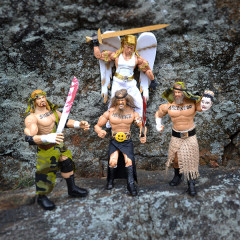 War-On-Christmas Action Figures. “I can’t think of anyone better to fight the false god of Seasons Greetings than these Old Testament badasses and the Archangel Michael,” MacDonald writes. “You do NOT want to wish these guys a happy Kwanzaa!” Photo courtesy of Ross MacDonald 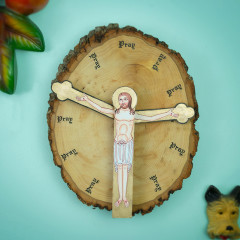 Time-To-Obey-The-Lord Clock. “Have you been doing enough praying lately?” MacDonald asks. “Probably not, but there’s no time like the present.” Photo courtesy of Ross MacDonald Jesus’ Pet Dinosaur Nacho Platter. Because God made the world 6,000 years ago, Jesus had a pet dinosaur. Photo courtesy of Ross MacDonald 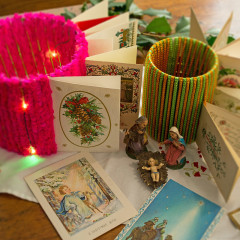 Count Your Blessings Card Display. “When I was a kid,” MacDonald writes, “we made these in Sunday school using old tomato cans and unwanted yarn.” Photo courtesy of Ross MacDonald 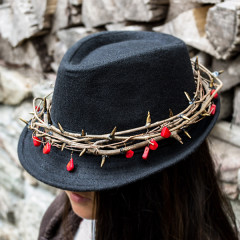 Fedora of Thorns. “Everyone who sees you sporting this jaunty chapeau will shout, ‘Thank you!’ for the graphic reminder of whom it was that suffered and died for their sins,” MacDonald writes. “Plus — admit it — it just looks badass.” Photo courtesy of Ross MacDonald 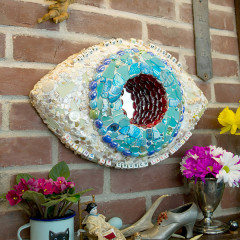 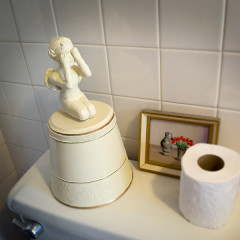 Guardian Angel Backup Roll Cozy. “Now you can have your own personal guardian angel,” MacDonald writes. “One that will always have a backup roll for you!” Photo courtesy of Ross MacDonald 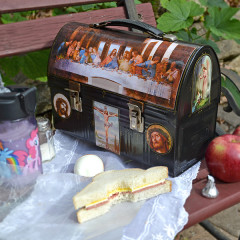 Last Supper Lunch Box. “Now, when I walk into the lunchroom with a skip in my step, my new lunchbox lets everyone know I am a team player,” MacDonald writes. “And who knows — it just might boost employee morale!” Photo courtesy of Ross MacDonald 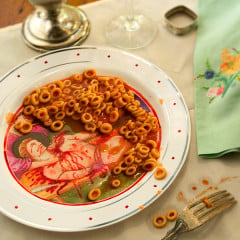 Daily Bread Plates. “After your guests dig down through the spaghetti and get a gander at what’s been hiding under their food, they will be praying, but it won’t be for seconds,” MacDonald writes. Photo courtesy of Ross MacDonald Santa Claus Is Coming To Town Nativity Scene. “I decided it was time to set things right and create a vision of the perfect first Christmas, they way it should have been,” MacDonald writes. Photo courtesy of Ross MacDonald