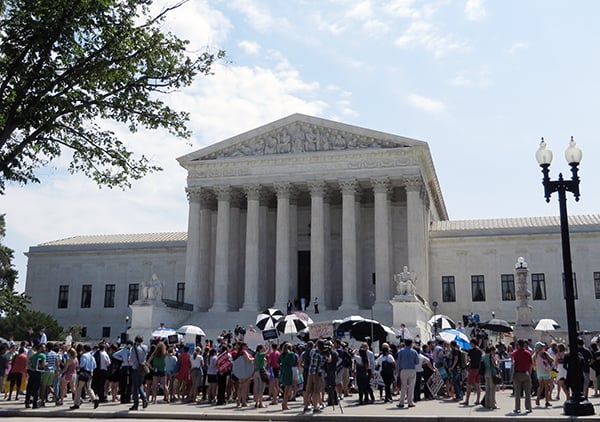 Citizens rallied on the steps of the Supreme Court on Monday (June 30), after it sided with the evangelical owners of Hobby Lobby Stores Inc., ruling 5-4 that the arts-and-crafts chain does not have to offer insurance for types of birth control that conflict with company owners’ religious beliefs.

WASHINGTON — An epic legal clash between religious liberty and reproductive rights left the Supreme Court deeply divided, raising the likelihood that the justices will deadlock over a challenge by religious non-profits to the federal government’s so-called “contraceptive mandate.”

In a contentious series of cases that pits the Catholic Church and other religious believers against the Obama administration in the midst of a presidential election, the justices split along familiar lines Wednesday (March 23), with liberals skeptical of the religious groups’ claims and conservatives empathetic.

Unlike in 2014, when the court ruled 5-4 in favor of the Hobby Lobby chain of craft stores and other objectors, only eight justices heard the non-profits’ challenge in the wake of Justice Antonin Scalia’s death last month. That makes it much tougher for the non-profits to win.  The justices also could decide to hear the case again when they are back to full strength — but with President Obama and Senate Republicans at loggerheads over the nomination of federal appeals court Judge Merrick Garland, that could take another year or more.

On one side, the court’s four liberal justices argued that the government has accommodated groups such as the Little Sisters of the Poor by allowing them to cede birth control coverage to their insurers or third-party administrators. Exempting the non-profits completely, they said, would require employees to find and pay for separate insurance policies just for contraceptives.

“It can’t be ‘all my way,'” Justice Ruth Bader Ginsburg said. “There has to be an accommodation, and that’s what the government tried to do.”

On the other side, the court’s conservatives said the government should not be able to “hijack” the insurance plans of religious charities, schools, universities and hospitals against their moral beliefs.

The cases are the latest in a series of disputes pitting the rights of religious organizations and businesses against the government’s efforts to impose national standards. Those disputes have played out in recent years over health care and same-sex marriage, reaching the high court multiple times.

This was the fourth time before the court for Obama’s prized Affordable Care Act, and it came on the sixth anniversary of the law going into effect. While it suffered a setback in a 2014 case over the so-called “contraceptive mandate” as applied to certain for-profit businesses, it has survived two major challenges to its broader insurance requirements and subsidies.

Wednesday’s oral arguments, which stretched for 90 minutes rather than the usual hour, focused on appeals from religious nonprofits to the government’s requirement that insurance plans include all common types of contraceptives at no cost to workers. The government lets them leave that responsibility to their insurance plans, but the groups say that still implicates them in an objectionable process.

Their pleas for relief won vigorous backing from some justices, including Roberts and Samuel Alito, who dominated the questioning in the voluble Scalia’s noticeable absence. Alito noted the organizations have argued that “this presents an unprecedented threat to religious liberty in this country.”

Justice Anthony Kennedy, who is likely the deciding vote in the case, appeared to be against the government as well. “It seems to me that that’s a substantial burden” on the religious non-profits, he said.

Yet Kennedy didn’t buy the argument floated by Noel Francisco, one of two lawyers who argued the religious groups’ cases, that they deserved the same exemption given to churches and other purely religious institutions.

“It’s going to be very difficult for this court to write an opinion which says that once you have a church organization, you have to treat a religious university the same,” he said.

And Justice Elena Kagan disputed Francisco’s comparison to the mandate’s other exemptions, such as employer insurance plans without birth control coverage that are permitted during a transition period, or small businesses with fewer than 50 employees who do not have to provide health coverage.

“There’s not a law in town that doesn’t have exceptions like that,” Kagan said.

Justice Stephen Breyer, who often tries to strike a compromise with his more conservative colleagues, said some burdens are the price of being “a member of society.” He drew comparisons to Quakers paying taxes that finance wars or Christian Scientists receiving emergency medical treatment.

Most lower courts have backed the government, ruling that the accommodation — extended in 2014 to for-profit businesses whose owners have religious objections, such as Hobby Lobby — provides a sufficient buffer. One appellate court went the other way last year, creating a split that only the Supreme Court can resolve.

The Obama administration sought an accommodation for the non-profits several years ago after they objected to the requirement that contraception be included in all women’s preventive health insurance packages. The solution: put the objections in writing, and the burden will be switched from employers to insurers.

That was enough for most federal appeals courts that have heard the challenges. The U.S. Court of Appeals for the District of Columbia Circuit, in a case brought by the Archbishop of Washington, said those who opt out “are excused from playing any role in the provision of contraceptive services, and they remain free to condemn contraception in the clearest terms.”

But the Supreme Court blocked many of those rulings from taking effect while the appeals play out. Justice Sonia Sotomayor blocked the ruling against the Little Sisters of the Poor on New Year’s Eve more than two years ago. Otherwise, non-profits could have been liable for fines of up to $100 per day for each uncovered worker.

More than 99 percent of sexually active women ages 15 to 44 have used at least one type of birth control, according to the Guttmacher Institute, which conducts research on sexual and reproductive health and rights. Abortion rights groups say any additional obstacles placed in their way raises the risk of unplanned and risky pregnancies.

Religious liberty groups say the Obama administration can guarantee women coverage for contraceptives without forcing employers with religious objections to provide it. That could take the form of direct government aid or private insurance plans offered on the Affordable Care Act’s insurance exchanges.

U.S. Solicitor General Donald Verrilli, who has argued all the health care and same-sex marriage cases pitting the government against religious believers, said that presents too great an obstacle.