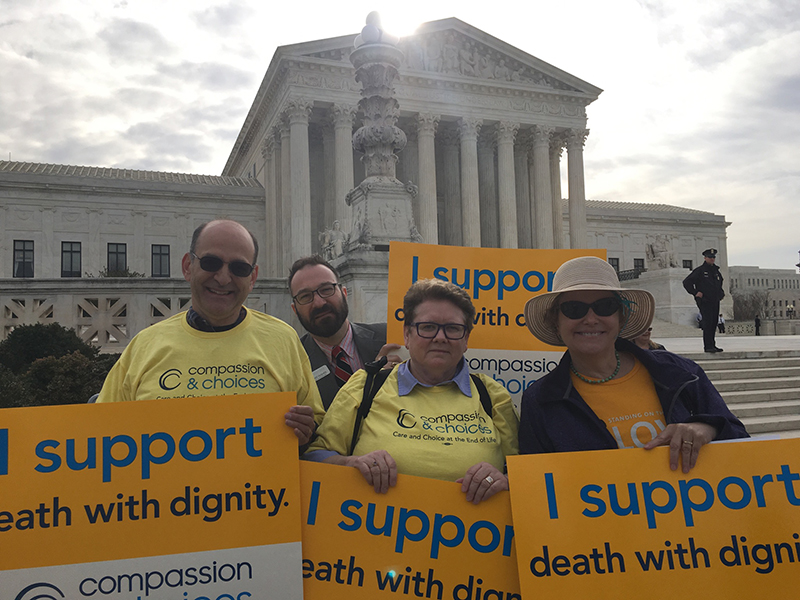 Left to right, Bill Snyder, Jared Hughes, Carla Lehn and Alexa Fraser, demonstrators from Compassion & Choices, a group that advocates for the legalization of physician-assisted dying, which is opposed by the same religious groups that oppose the contraception mandate, stand in front of the Supreme Court in Washington, D.C., on March 23, 2016. Religion News Service photo by Lauren Markoe
March 24, 2016
Cathy Lynn Grossman

Left to right, Bill Snyder, Jared Hughes, Carla Lehn and Alexa Fraser, demonstrators from Compassion & Choices, a group that advocates for the legalization of physician-assisted dying, which is opposed by the same religious groups that oppose the contraception mandate, stand in front of the Supreme Court in Washington, D.C., on March 23, 2016. Religion News Service photo by Lauren Markoe

(RNS) The birth control battle before the Supreme Court might also lead to a new fight over rights at the end of life.

The right to choose how and when to die was not part of the arguments that the eight justices heard Wednesday (March 23) in Zubik v. Burwell. The case is a challenge by faith-based nonprofits, including a group of Catholic nuns, to the contraception mandate in the Affordable Care Act.

But among the hundreds demonstrating outside the court were activists from Compassion & Choices. The right-to-die advocacy group made headlines in 2015 with its support for Brittany Maynard, who chose physician-assisted dying at age 29 rather than let a brain tumor slowly kill her. The organization led efforts for the passage of the End of Life Option Act that takes effect in California this summer.

Attorneys for Compassion & Choices, which submitted a friend-of-the-court brief in the contraception case, said Wednesday that if the religious groups win on blocking contraception coverage, the ruling could easily apply to decisions about care at the end of life.

The contraception mandate case is argued by plaintiffs as a substantial burden on their religious freedom. Houses of worship are already exempt from the mandate, which requires employers to have insurance plans for employees that offer birth control free of co-payments. But faith-based institutions such as hospitals, schools, charities and nursing homes are not exempt.

The Obama administration created a workaround for groups with religious objections to contraception. They could "opt out" of directly providing insurance that covers contraception merely by signing a letter stating their objections. The government would then orchestrate the coverage with the insurers.

The Little Sisters of the Poor, who operate homes for the elderly, and six other plaintiffs objected. They argued that to sign such a letter -- or face severe fines for noncompliance -- would be to “opt in” to facilitating sin. On Wednesday, more than one justice described this as a government "hijack" of insurance plans.

Faith-based health care providers may say they are free to apply the same argument to patients at the end of life, said Kevin Diaz, Compassion & Choices national director of legal advocacy, and Jon Eisenberg, who co-authored the brief. The providers would be empowered to tear up a patient's end-of-life care directives if those clash with the religious doctrine of the provider. They would also be able to refuse to transfer the patient to a hospital that will comply with his or her wishes.

Currently, 47 states require providers to cooperate with a transfer request. But Eisenberg said Wednesday afternoon, after observing the arguments at the high court, that signing a transfer could be seen as equivalent to signing the “opt-out” letter for contraceptive coverage.

“It is an alarmingly short step,” attorneys for Compassion & Choices  wrote, for faith-based providers to sidestep federal regulations requiring that a patient's wishes are honored, leaving them helpless.

The likelihood of this is not inconsiderable. The Catholic Health Association includes more than 600 hospitals and 1,400 long-term care and other health facilities in all 50 states, making it the "largest group of nonprofit health care providers in the nation."

They follow ethical directives written by the U.S. Conference of Catholic Bishops. These not only forbid contraceptive care and abortion. They also view artificial food and hydration not as an option for the patient or family to decide, but as religiously obligated care, including for patients in “in chronic and presumably irreversible conditions.”

Based on the Zubik v. Burwell arguments Wednesday, Eisenberg and Diaz predicted the four conservatives remaining since the death of Justice Antonin Scalia and the four liberals would deadlock.

This might leave in place lower court decisions -- chiefly favorable to the government position. Or the court may set the case aside for rehearing when Scalia’s vacancy has been filled.

(Cathy Lynn Grossman is a senior national reporter for RNS)